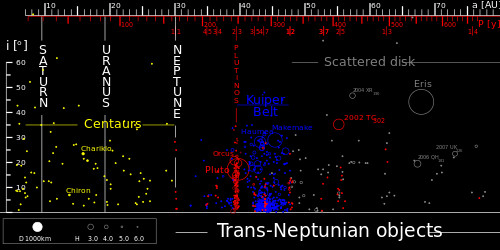 About ten years ago, astronomers discovered a single dwarf planet, which they named Sedna, beyond any then-known object in the solar system. Its discoverers half suspected it was a freak of nature. It wasn’t, and isn’t. Another astronomical team now reports a new object, a companion to Sedna. They say further this new object won’t be the last such object anyone discovers. But they miss one important implication. Other teams will likely confirm their opinion by discovering a third Sedna, and a fourth, and many more. When that happens, astronomers will have to admit the solar system is significantly heavier than they suppose. And that extra weight, far from supporting their conventional models, undermines them. 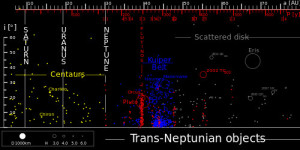 Distribution and classification of trans-Neptunian objects

This second Sedna has no name yet. The team under Dr. Chadwick W. Trujillo designate it 2012 VP113. In their letter to the journal Nature, they give its perihelion, or closest approach distance to the Sun: 80 AU. Sedna, at 76 AU, comes somewhat closer. 2012 VP113 measures 450 kilometers across, about half the size of Sedna.

The detection of 2012 VP113 confirms that Sedna is not an isolated object; instead, both bodies may be members of the inner Oort cloud, whose objects could outnumber all other dynamically stable populations in the Solar System.

Trujillo uses the term inner Oort cloud to describe a population of objects between the Kuiper belt (technically from 30 to 50 AU) and the hypothetical outer Oort cloud (the “Oort cloud” of most discourse), beginning at 10,000 AU.

Alicia Chang of the Associated Press interviewed several other astronomers. They included members of the team that discovered Sedna. They agree with Trujillo. Chang quotes David Rabinowitz of Yale University, a co-discover of Sedna:

Sedna is not a freak. We can have confidence that there is a new population to explore.

All this is perfectly true. But Trujillo, Rabinowitz, and others now hailing 2012VP113 all miss this vital point. If an “outer Kuiper belt” exists, with many objects of this size, the Solar system is significantly heavier than astronomers have thought. The added mass then solves one of the few problems for an alternate theory of the origin of comets. According to that theory, comets did not form in a “cloud” waiting for objects inside them to “perturb” them to fall toward the sun. Instead, comets formed from material that launched from earth, from the most violent event the earth has ever known, the one event deserving of the name cataclysm.

Today, the favorite theory on where comets came from, is that they exist in a cloud, 10,000 AU to 50,000 AU from the sun. They originally formed among or near the gas giants. Some of these, passing close to the gas giants, fell into “short period” orbits. Others fell outward, to the present Oort cloud region.

Walter T. Brown, PhD, offers a radically different theory. Comets did not form in any “nursery” among the gas giants. Instead, a subcrustal ocean on Earth broke containment and shot straight up into the air, carrying large amounts of rock and mud with it. Most of this water fell back to earth, and this is the water of the Global Flood. But at least one percent of the earth’s mass stayed in space, and accreted to form the comets, asteroids, and meteoroids we know today.

Brown has always acknowledged one problem with his theory. The Solar System has a large population of comets with aphelia (farthest distances from the sun) of up to 50,000 AU. That, of course, is the outer limit of the Oort cloud. By conventional estimates of the size of the solar system, these comets should have periods (“years”) of about 4 million years. Yet the theory depends on a violent event happening about 5300 years ago.

Brown has always suspected the Solar System has more mass than the total catalogued amount. He also suspected astronomers would find this extra mass beyond the Kuiper Belt. Here’s why: orbiting mass beyond any one object exerts no pull on that object. But once the object moves beyond that mass, it is now subject to the cumulative pull of that extra mass and everything else inside it. So an object could achieve an aphelion of 50,000 AU, yet have a resultant period far shorter than 4 million years. With enough mass, such a comet could have a resultant period well shorter than the 5300  years that elapsed since the Global Flood.

And now, conventional astronomers report they have every reason to find this mass, about where Brown said they would.

Brown cites Iorio’s 2007 paper, showing how heavy the Kuiper Belt must be:

And now, Trujillo and Rabinowitz eagerly wait for their colleagues to discover other, equally heavy objects, beyond 50 AU.

In other news: a ringed Centaur

Sedna’s new companion wasn’t the only big news to break in the journal Nature. Braga-Ribas and company reported finding rings around another object, 10199 Chariklo.

Chariklo is a centaur, a satellite of the Sun, between Jupiter and Neptune, that has some of the qualities of an asteroid, and some of a comet. Chariklo is the largest of that class of objects. So if any centaur would have a ring system, Chariklo would.

But: how could Chariklo, or any object that small, have rings?

Brown discussed the problem with this Examiner this morning:

Astronomers used to scoff at the idea that asteroids could have moons. When the first astronomer reported seeing one asteroid orbiting another, his colleagues at first laughed at him.

They aren’t laughing now. But they ignore this key fact: orbital capture cannot take place without something to slow down the object to be captured. That something, says brown, was water vapor.

During the Global Flood, a lot of the water that escaped into space simply evaporated. It persisted as a gas. That was enough to slow down small objects, so that larger objects could capture them.

He also said those objects could never form  unless all the material was falling together.

Brown confidently predicted the discovery of more centaurs with rings, and asteroids and Kuiper Belt objects with moons. More to the point, he welcomes the eventual discovery of more companions for Sedna, enough to solve the riddle of how a comet, forming from matter launched from earth, could itself launch into an orbit carrying it to 50,000 AU and maybe beyond. That solution would make the Oort cloud unnecessary.

Update, March 28, 2014: Dr. Walt Brown reminded this correspondent today of a passage in his book that addresses the aphelion of long-period comets:

The distance (50,000 AU) is in error. Comets more than about 12 AU from the Sun cannot be seen, so both the distances they have fallen and their orbital periods must be calculated from the small portions of their orbits that can be observed. Both calculations are extremely sensitive to the mass of the solar system. If this mass has been underestimated by as little as about 17 parts in 10,000 (about the mass of two Jupiters), the true distance would be 585 AU and the period only 5,000 years.

Methane and mass extinction: not so fast