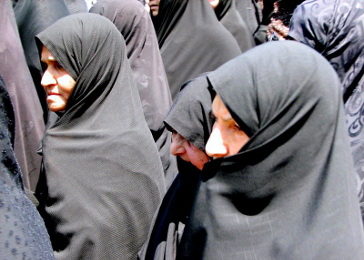 Did Minneapolis’s democrat Mayor Betsy Hodges not get it? This was no game, not dress-up playtime or Carnival. Then I wondered if she ever found occasion to dress in the ethnic clothing of her city’s other ethnicities – the Germans, Swedes, Norwegians, Danes, English, Poles, Irish, French Canadians, Native Americans? Perhaps she had not done her homework about the Somali immigrants, and it took her only 100 days into office to don a hijab for an alliance.

From Wonder Woman to hijab-clad subservient?

Surely, she has heard all the recent news about the subjugation and severe treatment of women in the Islamic Middle East; the Honor Diaries film that the Council of American-Islamic Relations (CAIR) is trying to suppress; the controversy over Brandeis University’s bestowing and then rescinding an honorary degree to Ayaan Hirsi Ali, the pressure applied by CAIR that forced Disney to cancel a movie that Muslims find “offensive,” and more. Then why would she don the quintessential symbol of inequality and bondage – the shroud of the Islamic woman.

Interestingly, the mayor has a strong admiration for Wonder Woman, the most popular female superstar in figure-hugging, stars-and-stripes regalia, with bracelets that make her invincible. Hodges is a collector of Wonder Woman dolls and has recently hung a photograph of this shining symbol of strength and sexual equality on her office wall. Rather than emulate her heroine, however, she abandoned the image with which she allegedly identifies, this icon of bravery and justice, for cowardice and deceit.

Perhaps she is a Lost Soul, one without direction, without ties to ethics or principles, unstable in today’s culture and society. Unwilling or unable to stand up for American ideologies, she too easily acquiesced to the preferences or demands of the archenemy of humankind. Whether Hodges was clueless and diplomatically inept or has emerged with a heretofore concealed agenda remains to be seen, but both choices do not bode well for the office she holds. 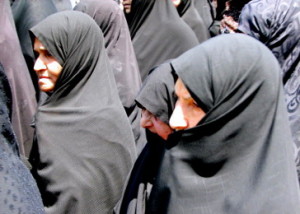 What began as the 7th century Bedouin woman’s attempt at privacy and protection in the desert, these shrouds have become a symbol of woman’s indignity and servitude. As Nonie Darwish so aptly explained in her book, Cruel and Usual Punishment, woman has come to represent the totality of evil and inferiority in Islamic teaching. Considered lacking in intelligence and religion, women are seen as half, and sometimes a quarter, of man’s worth in a Shari’a court (Islamic law). They may be beaten by their husbands and forbidden to leave the house unless accompanied by a male relative. They may be killed by their fathers if the parent deems his honor compromised. In this oppressive society, women are the ones who preserve the honor of the male, so that he may avoid responsibility and disrepute for any unpleasantness or trouble.

The hijabs and burqas serve the purpose of enforcing obedience to Shari’a and to men. With the obligation of defending their enslavement under constant threat of their own destruction, they may become very self-justifying when challenged. Some may even try to earn honor and respect by joining the radicals for violent jihad (holy war against the infidel). But there’s more. To cultures that relish freedom, these hidden women are deemed victims of sadism, forced to endure the insufferable heat of the subtropics under layers of clothing, and prevented from enjoying the summer sun and cool breezes. In fact, medical experts have noted that women so covered in northern climes, with less sunshine, are suffering more from osteoporosis from the lack of Vitamin D, and experiencing an increased risk of pelvic fracture during childbirth. Their newborn babies are more prone to getting seizures from the same deficiency.

Islamic law is concerned more with raping, beating, flogging, and stoning women than it is in honoring them. The Shari’a demand that women be covered from head to toe is also the Islamic way of solving the problem of male sexual temptations. Rather than teach the men self-restraint and respect, the onus is on the woman to hide herself, her sexuality, her body, her shame. Tragically, because there are women who want to appear as being obedient to their god and faith, it becomes the burden of other women to withstand being hated, ridiculed, or become targets of fatwas. Women face divisiveness or derision at every turn, and their society discourages, and even hinders, women from establishing friendships, particularly where polygamy is practiced.

To have surrendered her dignity, self-esteem, pride in her American heritage and culture. goes beyond Hodges’ courtship of a voting bloc or fulfilling a promise to constituents. She is responsible for having her female police chief and city council representatives wear the hijab on February 28, proclaimed Hijab Day at City Hall. Rather than guide these new immigrants in becoming Americans, as previous ethnic groups have done, she is accepting their customs and laws over our own.

When the intruder or invader makes demands (no matter how subtle) that are met with compliance and submission from the host culture, this is conquest, not assimilation. I am deeply concerned as to how Hodges and her administration will address future demands, as they will surely be forthcoming – whether for Islamizing children in the classroom, serving only halal foods in the cafeterias, observing Islamic holidays on the city calendar, or all manner of accommodations in everyday life.

Hodges’ decision may well have been meticulously planned. Her hijab is stealth jihad.

From Hijab to Jihad | feedreadnews.com