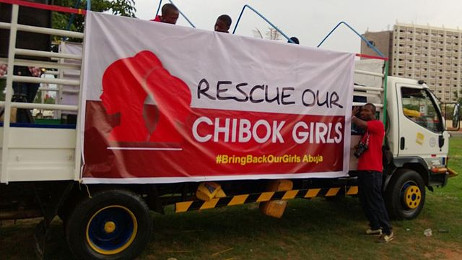 On April 21, 2014, the Islamic terrorist extremist organization Boko Haram kidnapped 234 young Christian girls from their school in Chibok, Nigeria. In response, First Lady Michelle Obama stood pouty-faced in front of a camera, holding a sign begging Islamist militants in Nigeria, “#BringBackOurGirls.”
This week, a picture surfaced of Abubakar Shedau, Boko Haram’s leader, holding a machine gun in one hand and a sign in the other, “#We Surrender.” 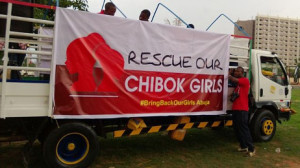 A truck promotes the #BringBackOurGirls hashtag used by protesters of the 2014 Chibok kidnapping. Photo by Medina Dauda, Voice of America.

Going on Twitter is a form of talking, which this administration confuses with actually doing something. Fighting back with tactical hashtags across social media is not only worthless, it’s pathetic, embarrassing and counterproductive because it makes America look weak. It’s one thing for powerless people in Nigeria to tweet in an attempt to motivate their government into action. It’s another when government takes no action in favor of tweets. A great nation cannot base its foreign policy on what is trendy on the Internet.

In 6 years, this president and Democrats have turned the international policy of the United States that once confronted atrocities and evil in the world, to a tweet. America has changed into a much different place. Is America respected anymore as a serious superpower? Do we influence or project power on a global scale any longer ?

What’s most bothersome is the inherent assumption by so-called big-hearted Progressive liberals, that terrorist fanatics can be reasoned with or shamed into reversing their evil deeds. They are treated more like unavoidable natural disasters than the evil force they actually are.

The first American victory in the war against terrorism was won by Ronald Reagan, January 20, 1980, the first day of his presidency. Precisely as Reagan took the oath of office, 52 American hostages were released from Iran, after 444 days in prison under humble President Jimmy Carter.

President Reagan dealt a heavy blow to our enemies when he described them as the “evil empire.” His leadership won the United States a bloodless victory over terrorist Islam. In like manner, we dare no.t forget what our fortieth president taught us: “above all, as the Romans used to say, fortune favors the brave.”

Time’s Tyrants of the Year

Just tell them what they want to hear