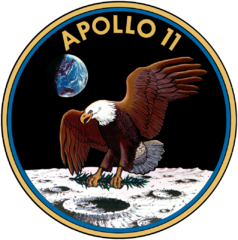 Forty-five years ago today, two men finished walking on the moon after two and a half hours. They then began the second most important part of their trip: coming back alive.

Apollo 11 had a purpose more than merely going to the moon. Recall what President John F. Kennedy had said:

I believe this nation should commit itself to achieving the goal, before this decade is out, of landing a man on the moon and returning him safely to the earth.

NASA planners debated long and hard between two different approaches: the direct descent approach, or the modular approach they took. That is: do you launch a rocket from earth that can set down on the moon, and take off again, leaving no part of itself on the moon or in space? Or do you take off in stages, even if it means leaving a stage or two behind?

NASA did well to do things as they did. They probably could never have built a direct-descent rocket with the techniques they had then. Even today a “universal lander” would take years to develop.

But more than that: the descent stage of the LM did more than merely get the astronauts down and give them a platform to blast off from. It also gave them electric power while they were down, carried many scientific instruments, and powered those instruments for years after. (Future Project Apollo missions would carry nuclear reactors in the descent stage.) 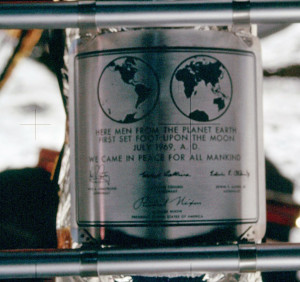 Photograph of the Apollo 11 lunar module EAGLE’s ladder showing the stainless steel dedication plaque stating that this was the place that Man first walked on the lunar surface. Photo by Astronauts Neil Armstrong and Edwin “Buzz” Aldrin, courtesy of NASA.

This page of the publication Apollo by the Numbers gives the official details. Astronauts Neil Armstrong and Edwin “Buzz” Aldrin walked on the moon for two hours, thirty-one minutes, and forty seconds. Most of us who remember watching them walk, remember them dancing like gazelles in the moon’s light gravity. The two astronauts said they had no trouble walking around, even in the heavy, bulky, ungainly suits they wore.

They also did four other things:

HERE MEN FROM THE PLANET EARTH

FIRST SET FOOT UPON THE MOON

WE CAME IN PEACE FOR ALL MANKIND.

After that, they climbed back into their Ascent Stage and shut the door. They would not come out again.

This was no ordinary take-off. The Lunar Module Ascent Engine was the only part of a Saturn V system that had no backup. Had that engine failed to fire, those two astronauts, or their frozen bodies, would lie on the moon to this day. Officials from the White House down had plans for just that sort of horror. Americans can be grateful they never had to set such plans in motion. (Although, when a fuel cell blew up aboard Apollo 13, they came close!)

Eagle made it back aloft, and docked with Columbia. The astronauts moved themselves, their samples, and whatever scientific instruments the “groundhogs” would need to look at, into Columbia. They then jettisoned Eagle. As far as anyone knows, Eagle orbits the moon to this day.

Not long afterward, Pilot Michael Collins fired the Service Module engine for Trans-Earth Injection, for the return trip to earth.