When people step out of their sphere of familiarity and take on a cause with a background of sheer ignorance, they just can’t connect the dots! Ay, que lastima (what a pity)! Such is the case of Penelope Cruz, Javier Bardem, director Pedro Almodovar and others.

These “voices of justice,” 100 Latino activists who have just awakened from a stupor, speak out for the poor Palestinian children, these “flowers” who, unbeknownst to the advocates, are killed because the jihadists intentionally place them with the rocket launchers so as to increase the body count and sway public opinion. 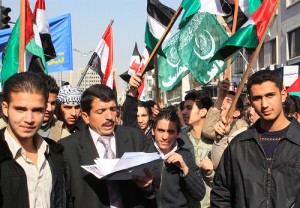 Hamas rally in Damascus, December of 2008.

Gazan women and children are commanded to stay in their homes, mosques, schools and UN clinics that contain the missiles and launchers, and directed to ignore Israel’s leaflets that warn of the next reprisal. Rather than build shelters for civilians, as Israel does, Hamas uses those millions of dollars in “humanitarian aid” to construct a massive tunnel network and purchase weapons. Even CNN covered the news about the tunnels – that were built with the help of many children, resulting in the reported deaths of at least 130 – no doubt added to Israel’s total. Aldomovar and the Bardems missed this unconscionable inhumanity.

What of the Israeli flowers, the three Jewish students who were kidnapped and murdered? Not a whisper from these distressed entertainers. What of the first rocket or tens of thousands of rockets fired into Israel? Not a murmur. What about the horrific slaughter of the Fogel family as they slept? No outcry for the Hebraicos. Neither will these Latinos acknowledge the post-traumatic stress syndrome of the Israeli children (Jews, Christians and Muslim), or the depression of the citizens’ living in constant terror or the increased number of miscarriages. Their blinders are all-encompassing.

The artistas missed these gems

It is now time to remove the blinders, as we learn new information about the formidable enemy, Hamas, reported by Arutz Sheva.

What kind of evil must be nurtured to even plan the tunnel massacre for the Jewish New Year celebration? Would our Latinos have cried genocide then? The Jewish people will never fall prey to another genocide; they have every right to take preemptive action to the next planned Jewish tragedy, misguided public opinion be damned.

These misinformed signatories of the condemnation believe the lies promoted in this asymmetrical propagandist warfare, that the blockade prevents entry of foodstuffs and other goods into Gaza. The Turkish flotilla was blocked because the ships contained not only weapons and explosives, but also unauthorized building material (which we now know was not for housing, but for terror tunnels), Gazans are not deprived of food, clothing, medical and recreational supplies; deliveries are made overland, by trucks. The victim status of Palestinians, however, must remain constant. If they were to acknowledge their freedom from “Israeli colonialism,” which they acquired in 2005, and achieve self-determination and statehood, they would have to give up the millions in aid and support for their cause – conquest of Israel. It is also said that if the young Palestinians who were paid to build the tunnels instead worked to improve their infrastructure, their city would be blooming.

Jews are denied entry into Islamic lands (as are Christians into some), but Muslims demand entry into Israel (for jihad) when they are not Israeli citizens. Would any government in its right mind accept jihadists into its country? The French prime minister recently announced his recognition of the scourge of Islam, and vowed to fight anti-Semitism, warning of the connection between anti-Semitism and anti-Zionism.

Odd that the Spanish, who are now marching in the streets with symbolically bloodied hands, cannot recall Spain’s conquest of 711 AD until La Reconquista in 1492, to deal with their current invasion. They cry for the Palestinian children, but who will be left to cry for their own? In fact, wherever there are riots, kidnappings, and bloodshed worldwide, there is Islamic immigration and a deteriorating host culture.

If Hamas were to cease fire, there would be peace. If Israel were to cease fire, there would be Jewish bloodshed, as there has been since the beginning of Islam, and at the moment Israel was voted a sovereign state. The Palestinians are the squatters and Hamas the occupier in the land that was designated for the Jews in the Ancient Bible and by the Balfour Declaration (1920), the League of Nations (1922), and formally by the United Nations (1948).

Artistas, who is killing whom?

Did these heroes of the silver screen describe as genocide the 23,526 attacks by Muslims since 9/11, or the 2500 Syrians killed during Ramadan alone? Where is the conscience of these artistas who cannot grasp that Islam is against them, their craft, and their children? Islamic law does not permit their films or welcome their talents. However, we may well also lose our taste for their talents if they advocate for tyranny and against democracy and survival of our civilization.

If America knew her history

You say that Penelope Cruz and her husband “step out of their sphere of familiarity” when writing that Israel is conducting a genocide on the Palestinians. Is it also stepping out of his sphere of familiarity when Yochanan Gordon of the “Times of Israel” newspaper writes “When Genocide is Permissible”? Because an Israeli Jew actually wrote that article saying that genocide of Palestinians IS OK….. I guess that he might have forgotten about the Holocaust for a moment….

He might also have been sarcastic. That kind of sarcasm comes with the experience of having rockets fall on you all the time, or always knowing someone who knew someone who died in the latest attack. That’s something Penelope Cruz and her husband, not to mention their entourage, could never understand in 5,356 years.

“their freedom from “Israeli colonialism,” which they acquired in 2005”

The fact you can write that just a few sentences after you talk about the blockade and “unauthorised building materials” shows just how divorced from reality – and therefore irrelevant – you are. An area that is being blockaded by sea and air, and has to beg permission to import a bag of cement, is not free in any sense recognisable by the sane.

Considering the uses to which Sean Hannity showed that Hamas put those bags of cement, you might want to re-evaluate.

“Considering the uses to which Sean Hannity showed that Hamas put those bags of cement, you might want to re-evaluate.”

First of all I’d trust Hannity as far as I could throw a battleship. Secondly it’s irrelevant; as long as Gaza’s borders and airspace are controlled by Israel it hasn’t been freed of Israeli occupation.

How do you think Sean Hannity filmed the sequence with himself inside that tunnel? Did he travel to the Negev or didn’t he?

And furthermore: a no-fly zone does not constitute occupation. It is merely another form of sanction. And as for the borders: do you mean to say that Gaza’s borders deserve to be fluid?

“a no-fly zone does not constitute occupation. It is merely another form of sanction.”

Except this isn’t a no-fly zone; the airspace above Gaza is under Israeli control. Legally that’s occupation. The same applies to the illegal naval blockade of Gaza’s coast. Restricting sea access is a hostile act. Israel knows that perfectly well, having used it as a pretext to attack Egypt in 1967. Even the ludicrous tax situation is a form of occupation. The PA can’t even collect its own revenue; Israel insists on doing it for them, then hands over the money if Benny feels like it – and keeps it if he doesn’t.

“And as for the borders: do you mean to say that Gaza’s borders deserve to be fluid?”

That’s not for you, me or Tel Aviv to decide. Again, legally, an area whose borders are controlled by another country is occupied. Israel is occupying Gaza illegally. There is a global consensus on this. The only country that disagrees is Israel, and as they’re the miscreant in this case their opinion doesn’t count.