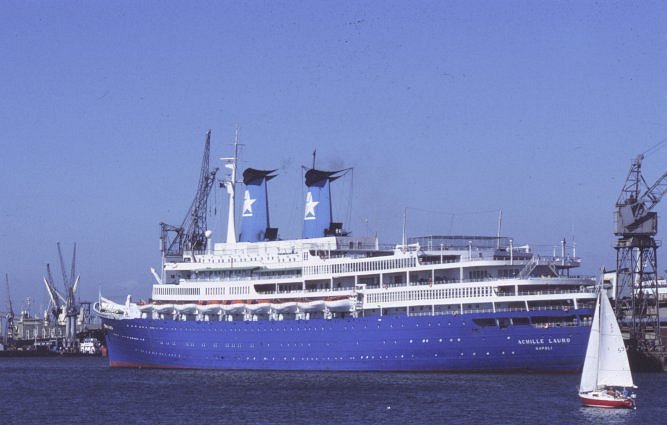 You Jews are always complaining of your own suffering, but you get fat off the poor, cheat the simple, exploit the virgin, pollute where you’ve exploited – America is one Big Jew!  We are soldiers fighting a war.  We are not criminals and we are not vandals but men of ideals.

Such are the words spoken by a Muslim-Palestinian terrorist in The Death of Klinghoffer, an American opera based on the 1985 hijacking of the passenger liner, Achille Lauro, by the Palestine Liberation Front, and their murder of a wheelchair-bound, stroke victim – the Jewish-American passenger Leon Klinghoffer, on holiday with his wife and daughters.  However, the words came from the mind of librettist Alice Goodman, an anti-Semitic, Jewish apostate-turned-Anglican priest, who found an “artistic” channel for her own animus, hatreds and biases.

Commissioned by five American and European opera companies and the Brooklyn Academy of Music, the composers have turned a heartbreaking event into musical entertainment.  The story is of a malevolent crime of Islamic jihad (a crusade to kill for conquest), presented with consideration for the villains and indifference to the innocent victim.  There is something deeply perverse – nay, depraved – in producing this for showbiz, as I see our once-great civilization sinking into the depths of a fascistic Islamic evil.

It is said that there can only be peace when the Muslims stop revering death the way Jews revere life.  Islam’s militaristic, expansionist, religious, oppressive ideology revolves around subjugation, mutilation, and death – all that is antithetical to our Western civilization.  As a nation we debate about length of prison terms, the death penalty, humaneness for animals, yet there are some will create, perform, and view a callous, political murder as “theater,” as well as provide a venue for slowly Islamizing the American psyche.

Surely, the Muslim Brotherhood would agree with Goodman, composer John Adams, theater director Peter Sellars, and general manager Peter Gelb, that this jihadist show be produced despite protests.  They prefer that we Americans remain silent about the Holocaust; Mohammed’s slaughter of Jews in Mecca and Medina; attacks against Christians in Africa, Indonesia and Europe; Spain’s “Golden Era” of humiliation and punishment; to the constant attacks and massacres of Jews long before the Jewish state became an alibi.  We must remain silent to protect the guilty as they continue to terrorize, spill blood and display severed heads – and whitewash their psychosis.

Have the Jews always complained of their suffering?  They have done more than just complain!  They have built memorials and museums so that others may learn the nature of evil through history rather than through personal experience.

However, when the Palestinians complain to the United Nations of a fictitious apartheid and a fabricated disproportionate war, they reap millions of dollars in benefits – more than enough to sustain their victimhood status and generous proceeds for generations to come.

While the Jews endured and remembered, they sought no revenge but used their energy to build a nation out of desert and malarial swamps – to a state of leadership in technological advancements in science, medicine, publishing, music and art, and more, in 66 brief years – the same number of years it took the Palestinians to create a culture of hate and death, where they abuse their children so that, in turn, they will victimize others.

The opera takes the position of the Palestinians against Israel, but the rhetoric quickly turns to hate of all Jews – and Americans.  Do the Jews get fat off the poor and cheat the simple?  As the labor of Americans – and Jews, specifically – improve their country and raise the standard of living for all citizens, they are among the most generous in the world (tzedakah) – their names noted for endowments to science, medicine and the arts.  The Jewish two percent of the American population is responsible for 30 percent of America’s most generous donors!  Israelis and Americans are among the first responders to disasters around the world, and Israel’s hospitals are renowned for their advanced medical treatment of all, including Palestinians.

On the other hand, Islam’s Five Pillars of Faith include alms-giving (zakat), the obligatory charity based on accumulated wealth, which is meant to ease the economic hardship for other Muslims and to eliminate inequality for followers of Islam only.  “It is not permissible to give Zakat to a non-Muslim…” (Umdat al-Salik, h8.24); neither do they provide help to other countries.  Zakat must be given to Jihad.

Children in Israel and under Islam

Goodman’s accusation of “exploit the virgin” is not merely a vicious lie, but pure projection, as no children suffer as much as those under Islam. Despite their perpetual state of threats of war – or perhaps because of it – Israelis are among the happiest nations in the world.  They work to improve their own lives, and the government provides superior defense, protection and shelters for their citizenry.  Additionally, ten years ago, Israel began integrating disabled youth into the Israel Defense Forces  (IDF), allowing these children to overcome their limitations and help prepare them for independent life in Israeli society, the community and the workforce – while they and their parents reap the rewards of joy and pride in accomplishment.

By contrast, under Islam, young girls undergo female genital mutilation (not a safe surgical procedure, but mutilation).  In war, Islamic combatants use children as human shields to increase their death toll to gain sympathy from the United Nations. Child labor was used to construct the underground terrorist tunnels, which also increased the death toll, and children are taught at a very young age to behead a kafir (infidel).  Further, throughout the Islamic world, since the days of Mohammed, they continue the practice of kidnapping girls and boy and raping and selling them into sexual slavery. Daughters may suffer honor killings by their own parents, or endure servile marriages.  All children, and particularly the vulnerable disabled, are intimidated into suicide bombings; their parents are rewarded with $2,500 per martyred offspring.

Finally, the operatic rant claims the terrorists to be neither criminals nor vandals, but men of “ideals.” Although undefined, the ideals are a worldwide caliphate, a “one-world order,” where the same rules of Sharia apply to all.  Therefore, Judaism, Christianity, Buddhism, Hinduism, and all other religions must be obliterated and their adherents converted to Islam or killed.  Once converted, women are relegated to a status inferior to men or be beaten or killed.  If a child “dishonors” a parent, the child may be killed. If a Muslim converts out of Islam, the apostate must be killed.  If a male or female is accused of adultery, he may be killed and she stoned to death.  Antisemitism is inherent in Sharia, a practice based on Mohammed’s genocidal behavior when he eradicated the entire Jewish population of the Arabian Peninsula.  Jihad is warfare to spread Islam – or kill those who will not submit to the “religion of peace.”

“We are soldiers fighting a war,” says Goodman (a misaptonym, at best) through the assassin.  She gets it.   She understands that these words and the entire opera may incite riots in the streets to burn synagogues or attack and kill Jews.  It is not her concern that this “art form” might encourage the Muslim Student Unions to increase their attacks on Jewish students on campuses.  Her use of inflammatory words of “suffering,” “cheating,” and “exploitation” have a purpose, and she, Adams, Sellars, and Gelb, agree on the purpose.  Immersed in their hostility toward religion, Americanism, and our Constitution, they have found a way to exalt in our destruction.