The news rings with tales of the most obvious kind of voter fraud: registering to vote when the law does not allow it, or standing in for a registered voter who has died or moved out-of-town or better yet out-of-State. But how do you know the voting machine tallies your vote accurately? Today a Republican State representative candidate from Chicagoland found out the hard way: you can’t always trust the machine. Election authorities can solve that problem, but only if they want to.

Jim Moynihan is running as a Republican in the 56th Illinois Assembly district. Today he took part in early voting, in Schaumburg, Illinois. He used a touch-screen voting machine. He duly marked his own check box on the ballot.

And the machine noted his vote – for his Democratic opponent.

He tried again. Same result. Then he tried to vote for the Republican candidates in other races. Again the machine registered the Democrat instead.

He came out at once and told the election judge. For everyone’s information: any voting precinct has at least three or four officers. The judge is the most senior. Next comes the inspector, the senior officer from the opposite party from the judge. Your correspondent has served as an election inspector in several elections.

The election judge kindly let Mr. Moynihan – somehow – cast valid ballots for himself and his fellow Republicans. But the reporter for the story never found out whether that election judge managed to get another voting machine in to replace the faulty one.

That was likely an accident. Anyone bent on voter fraud, by changing the results, wouldn’t be foolish enough to show what he was doing to the voter while the voter was voting. But how do you know, when you cast your vote, the machine will record it accurately?

Voter fraud in the machine: too easy 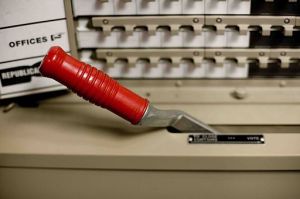 The Print-O-Matic voting machine, focusing on the giant red lever a voter must pull to the right to unlock the tiny voting levers, then pull to the left to cast his vote. Photo credit: Paul Joffe (Wikimedia Commons), CC BY-SA 3.0 Unported License

Eight years ago (hat tip: The Last Resistance), Home Box Office aired a documentary titled Hacking Democracy. It showed how easily one can hack a voting machine. Of course, the head of Diebold Electronic Systems (as the company then called itself) furiously said the documenters made it all up. But the Secretary of State for California commissioned a special report to check that out. The report’s authors said someone could hack a voting machine just as that documentary showed. The authors also said one could counteract such fraud easily. They offered a few solutions.

CNAV can understand, to a point, why election authorities like electronic voting machines. They have many fewer moving parts than do the century-old Print-O-Matic machines they replaced. A voter can vote on such a machine without having to do the high-resistance lever pull the Print-O-Matic machine required to:

They also can send results quickly and efficiently to the Secretary of State’s office, so they can tally them and send them out to the news media.

But the old Print-O-Matic machine did one thing the new voting machines don’t do: produce a paper record. At the close of voting, the election judge would hand-crank the machine to print out the results. He could then announce them for everyone present to hear them. Then he would take them down to City Hall for tallying. But today the judge takes in a memory card. And no one knows whether the memory is accurate. The special report shows how easily someone can alter it. And he doesn’t even need a password.

And of course, Hacking Democracy said nothing about a hack further upstream: pretending to register a vote one way, but tallying the vote the other way.

How to prevent voter fraud in the machine

CNAV proposes another way to solve the problem. Keep, next to the voting machine, a locked box with a slot on top. In short, a classic ballot box for paper ballots.

When the voter is ready to cast his votes, the machine prints out a list of the votes he marked. It prints two copies: one for the voter to keep for his records, and one to drop into the ballot box. When the voter is satisfied that the machine reflects his votes as he wants to cast them, he presses another button to confirm his vote. Then he drops a copy of the vote list into the ballot box.

Then, if anyone calls for a recount for any reason at all, the authorities can open the box and do the recount with those papers.

This system would preserve  the speed and ease-of-use advantage of the electronic voting machine, but keep the authentication advantage of paper ballots. Voter fraud, in the form of changing people’s votes without telling them, could not happen.

If Secretaries of State, and County Election Clerks, seriously want to stop voter fraud, they will reform electronic voting by this method.

Any devils left in hell?

Imagine that. In Chicago. WOW

Voter fraud with the machine | feedreadnews.com