Sharyl Attkisson never acted like an ordinary modern reporter. She did not accept, uncritically, any blandishments or platitudes from politicians. Nor did she hesitate to investigate Democratic claims, and a Democratic administration. Now she has no steady job. And she now tells this shocking story: someone, probably working for the government, “hacked” her. Such a scene normally plays out only in political thrillers. But this one played out in real life. So all those other reporters are right: Barack Hussein Obama endangers freedom of the press as no other de jure or de facto President has done.

Yesterday Sharyl Attkisson released this video she took with her smartphone. It shows her working at her computer, specifically on the deaths of Ambassador J. Christopher Stevens and three other men in Benghazi on September 11, 2012. Suddenly some person, using a remote-access program, takes over her computer, highlights several paragraphs of text, and deletes it.

Nor did the strange events stop with this. She told Greta van Susteren that her computer would power-on while she was in bed, trying to sleep. 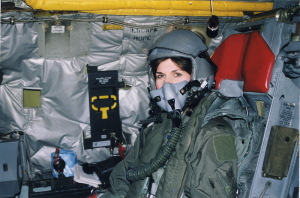 Sharyl Attkisson at a happier time in her career: aboard a B-52 in a bombing run over Kosovo. Photo: User Honeyplant on Wikimedia Commons, CC BY-SA 3.0 Unported License

Tad Cronn at Godfather Politics gives the video link and his own insights. She also will tell her story to Bill O’Reilly on Monday.

Few programs can do something like this. The video shows what can only be a remote-access program in action. Some technical support services ask you to install these on your computer, so they can run a virus-disinfection program from where they sit, without having to visit you. You can also install such programs so you can run your computer while away from home or office. Examples include GoToMyPC and TeamViewer. The problem: those other programs usually leave a signature on the screen of both “master” and “slave.” The video shows no such signature.

So the technique does show up in real life, not merely “in the movies.” But most of the time, you must consent to this.

But Sharyl Attkisson showed another piece of evidence. She uses Verizon Communications’ FiOS service. (Your correspondent uses FiOS also.) Verizon supplies a router with every installation. These routers double as wireless hotspots and Ethernet switches. Sharyl Attkisson discovered a cable plugged into her router. And she did not attach that cable.

According to Mr. Cronn, she then asked several of her sources what kind of remote-access program someone might install without her knowledge or consent. Those sources said the CIA, and only a handful of other agencies, use the specific kind of remote-access software this video suggests. Said one:

[This is] worse than anything Nixon ever did. I wouldn’t have believed something like this could happen in the United States of America.

Yet happen it has.

How the world is taking this

Her old colleagues at CBS say nothing. Zero. The Huffington Post and Media Matters for America both accuse her of either making it up or portraying a few stray keystrokes as a deliberate malware attack. (As the video clearly shows, she did not touch one key during the highlight-and-delete sequence.)

One expects that attitude from The Huffington Post and Media Matters. In particular, David Brock founded Media Matters to sell a lie: that Hillary Clinton is a true stateswoman. He merely expanded his umbrella to protect Barack Obama, too.

Seeing it from CBS should outrage everyone. One wonders what they have to say for themselves if they let the government do this to one who once worked for them. Worse yet, they take no interest in the worst breach of the First Amendment since Watergate and the cover-up that followed.

Or does CBS, even after Dan Rather has left it, still carry water for Democratic politicians and Democratic administrations?

CNAV has long suspected the “mainstream media” long ago turned themselves into the house organs of the Democratic Party. This intelligence suggests worse. If the United States government had a Department (or “Ministry”) of Information, these people might serve as its officers. (And by “information” we do not mean “informatics.”)

Worst of all: this government actually spies on reporters and tries to stop them from getting stories out. Does it also tell their bosses to fire them? Could be. Can a free society tolerate that sort of behavior? Absolutely not.