Last week de facto President Barack Obama gave part of the Progressive game away. He actually said a stay-at-home mother makes the wrong choice for America! Then he said what he really wants to do: enroll children in pre-school. And what is pre-school, but a crèche? And what Obama ally wants, is a government crèche. With that he can school a class of permanent government drones.

What is wrong with being a stay-at-home mother?

Ask Obama. The Daily Caller has a transcript of his remarks:

Sometimes, someone, usually mom, leaves the workplace to stay home with the kids, which then leaves her earning a lower wage for the rest of her life as a result. And that’s not a choice we want Americans to make. 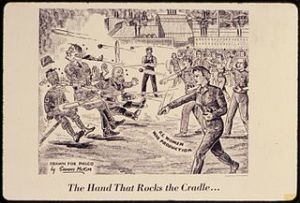 The Hand That Rocks the Cradle. Artist: Sammy McKim/Philco, from the National Archives, 1942.

First, what business is it of his, how a stay-at-home mother, or any other mother, raises her children? This shows yet again the government sticking its nose into things that are “none of its beeswax.”

Second, Obama promotes a kind of child neglect. Time was, child neglect meant leaving the child home alone, with no responsible adult to supervise him or her. Now, somehow, society accepts the idea of leaving the child with a minder. The minder draws a wage or salary. That  makes the minder a professional. And what does that make the stay-at-home mother? An “amateur.” Well, what of that? An amateur does what she does for the love of it. That is what amateur means: one who loves the job for its own sake. CNAV defies any “professional” to prove he or she loves any child as well as most parents do. Especially a stay-at-home mother, the noblest amateur of all.

Third, that wage or salary does not grow on trees. One of two things happens. First, the parent pays. Rarely does the work-away-from-home mother earn more, in the time the minder “frees up,” than she must pay the minder or the minder’s employer or agency. What a stay-at-home mother loses in wages or salary, she saves in not having to pay the minder.

Fourth, a stay-at-home mother does not necessarily depress her earning power. Ylan Q. Mui reported last week in The Washington Post on an interesting study from the Federal Reserve Bank of St. Louis. The authors found fathers or mothers who raised more children scored higher in most measures of career productivity. A mother gained more than a father from raising two or more children. And why not? When you raise a lot of children, you learn fast how to budget and manage time and money. And manage people. Sure, one loses time in short-term crises. A child takes ill and must go to a doctor or hospital. Mother wants to attend her children’s parties and games. But what she loses in these emergencies, she more than makes up for at other times. She makes up even more when the children grow older and more independent. And a stay-at-home mother does not need to “take off” for these emergencies. She can go back to work when the children have their drivers’ licenses. And her employer reaps all the productivity gains, and suffers no loss.

What Obama said next, really gives away the game:

Let’s make this happen! By the end of his decade, let’s enroll six million children in high-quality pre-school, and..and…

Then the video trails off. (Play it below.)

Six million children in “high-quality pre-school” by 2020. Lay aside for a moment Obama being a lame duck. (Or maybe not so lame if he plans a coup d’état to seize office permanently. But we digress.) What kind of pre-school is he talking about?

Four years ago, Education magazine (on-line) carried this article on the Obama pre-school plan. The article focused on a program Obama called “Zero to Five.” Zero to five years of age, that is. The article lists six specific points. They all amount to one thing: even during the first five years of a child’s life, Obama wants those children out of the home and in some kind of professional care setting. One highlight (or maybe “lowlight”): universal pre-school. A program for every child. Who pays for it? Taxpayers. (Obama never once cares about the interests of taxpayers. He treats taxpayers as if they were cows. He milks them every chance he gets. But again, CNAV digresses.)

What does this  money buy? What does the Zero to Five program really amount to? A crèche. A government crèche, in stages. From the day he or she is born, the child would never see the place we call “home.” The child would first be in Level One nursery, then in “day care,” then in nursery school, then in the universal pre-school, then in kindergarten, and then in traditional industrial-style school. Mother becomes an interfering busybody. Leave it up to the professionals! The stay-at-home mother throws a monkey-wrench into that plan.

And home-schooling? Blank-out. Obama does not like the choice a stay-at-home mother  makes. So surely he would not like home-schooling any better. Of course not. In home-schooling, the mother, especially a stay-at-home mother (or sometimes the father) takes direct control of what her (or his) child learns. A wise choice. No Common Core. No apologia for Islam. (Nor for secular humanism, the official State anti-religion.) No Communist Manifesto, either. Oh, no. Home-schooling would never be a choice Barack Hussein Obama would ever want Americans to make.

That’s why Obama does not like stay-at-home mothers. Because the hand that rocks the cradle, truly rocks the world. And Obama knows it.

So, Obama is no longer pro-choice when it comes to women making decisions about children…? After all, he said, “Sometimes, someone, usually mom, leaves the workplace to stay home with the kids, which then leaves her earning a lower wage for the rest of her life as a result. And that’s not a choice we want Americans to make.”