The grand paradigm conventional “men of science” call “evolution”  promotes sin and death. In fact, evolution allows no room for the concept “sin” as the Bible describes it. Worse than that: it turns sin on its head. The only real sin, to an evolutionist, lies in preventing the deaths of the “unfit.” For only by such deaths, according to evolution, can the human race improve.

The Trident of evolution

To review: what most people call “evolution” has three elements, not only one. They are: 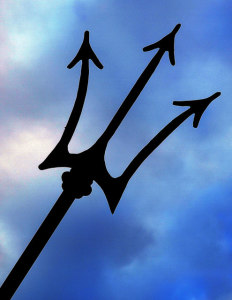 Trident on a statue in Queen Victoria Square. © Copyright Andy Beecroft and licensed for reuse under this Creative Commons Licence.

God has no place in this paradigm. Abiogenesis says life did not need God to come about. Uniformitarianism says life had a long, long time to change from one life form to the variety we see today.

Nor, in fact, does sin have a place in this paradigm. Sin means either missing a target (Greek hamartia), or committing a crime (German Sünde). As a Christian (or a Jew) uses the term, sin provokes judgment. But the evolutionist asks: what sets itself up as judge in the jungle? The Law of the Jungle has no judges. One organism will kill another. No further drama will result.

But the philosophy of evolution does make a judgment, and a cruel one.

A sin to prevent crime?

The classic teaching in evolution speaks of natural selection. Meaning: in the wild, the successful life forms select themselves for promotion. They do so by killing others, or taking (“hogging”) all the resources for themselves.

Understand this. The most successful organism is a thief, a conqueror, and a murderer. Not to mention a rake, at least in the case of the male of the species. To quote Walter Matthau in Fail-Safe (dir. Sidney Lumet; with Dan O’Herlihy, Walter Matthau, and Henry Fonda; Columbia Pictures, 1964):

Those who can survive, are the only ones worth surviving.

Thomas Hobbes (Leviathan) did say the life of that successfully murderous organism is “solitary, poor, nasty, brutish and short.” But that’s the way evolution, or natural selection, works. (At least its advocates say that. Has anyone ever seen a taxonomic family arising out of another?)

Evolution has no room, at all, for the concept of a Chief Architect of life, of Him Who Must Be Obeyed. It has room only for the despot on the one hand, and the rebel on the other. Life becomes an incessant, unrelenting war.

And indeed: the only sin, for a consistent advocate of evolution, is to prevent death. Remember: a successful organism kills to select either itself, or the most athletic and agile of its prey.

Friedrich Nietzsche read Darwin and the other pioneers of evolution. He then pronounced God dead. He also proposed the Übermensch, or Superman, as the ideal man. Adolf Hitler took his ideas to heart. This justified (if you can call it justice) every program the Nazis ran, from Lebensborn (eugenics), to the miscegenation laws, to the Holocaust.

And in America, a self-styled “feminist” named Margaret Sanger also took those ideas to heart. She founded Planned Parenthood to “remove the inferior races” from the population.

Except to satisfy one particular constituency, most liberal politicians do not dare promote the anti-morality of evolution. Most would recoil in horror at the thought. Most, but not all. Peter Singer at Princeton University defends abortion, not by claiming the unborn child is not yet alive. Instead he says taking an innocent life is not necessarily wrong. He does not even flinch from defending infanticide.

Peter Singer at least is honest. Most who advocate for evolution, are not honest about the moral, or anti-moral, system evolution demands.

[…] The grand paradigm conventional "men of science" call "evolution" promotes sin and death. In fact, evolution allows no room for the concept "sin" as the Bible  […]

And of course when one looks past the so-called “science” one finds the evidence to support the claims does not exist. The foundations of evolution are built on sand. It requires more faith to believe in evolution than a god, gods, or that aliens put us here. From what I have read even the test that are used to determine age of rocks can not even survive the classic double blind test. Evolution requires blind belief in place after place.

Another very unusual essay. I’m not sure what you’re getting at: are you suggesting that there is no such thing as natural selection, or that some randomly chosen organism does not compete for resources with other organisms in its environment, or what?

You mention killing a bunch here, and we are meant to see that as Bad. How do Bible-believing Christians survive on Earth without killing? Whatever do they eat? Where do they live? What do they wear? You use a lot of language about stealing, conquering, murdering, hogging, etc. That’s all very dramatic and evocative, but you might just as easily have used language about producing, expanding, efficiency, improvement, etc. When Europeans planted colonies on a North American continent whose native population had been ravaged by disease to near the point of collapse, were they murderous exploitative thieves or bold explorers making better use of local resources? I know which answer you will give; I mean only to point out that your choice of language is pretty blatantly pitched to highlight conflict and killing when there are many, many other mechanisms that can determine relative fitness. The conflict emphasis is a pretty nineteenth century view of natural selection. To pick just one example: achieving reproductive age one season earlier than your conspecifics could let you produce, on average, more offspring than them, and if that trait breeds true it means that over time your genotype will become more frequent in the population without you having to assassinate or brutalize anyone. If you can tolerate a few more degrees of cold you can live higher up the mountain where the predators thin out, or a few miles farther north where a different food plant grows.

I would agree with you, I suppose, in that a society’s _response_ to the reality of evolution and natural selection can have a moral aspect. You can choose to go the Spartan route and cull the imperfect, or the modern Western way and expend lots of resources on treatment, cure, prevention, etc. You can sterilize the untouchables or work to erase that status. ‘Evolution’ doesn’t care either way. Just like ‘Capitalism’ doesn’t care if one factory owner dumps waste into a municipal storm sewer while another expends resources to detoxify it.

I suggest that classical evolution leads to the conclusion that a sound society ought to make murder legal.

That seems like rather a non sequitur. Do please expand.

The whole point of this essay is that “evolution” cannot support a moral system for human beings. At least, not a moral system as we know the term. Under evolution, the things we call “sin” are not sinful. (Not all of them, certainly.)

Does the germ theory of disease support a moral system for human beings? Does the lack of moral absolutes in the kinetic theory of gasses make you lose sleep at night? Under the theory of gravity, are the things you call ‘sin’ not sinful, or not all of them anyway?

Don’t confuse operational science with origins science. The latter tells us where we came from, or tries to. Origins form the basis for morality.

Of course in the fullness of time it was the religious tradition that yielded here, and heliocentrism became noncontroversial and lost any moral dimension (barring the few holdouts you can find on the internet, who may or may not be sincere in their beliefs but can certainly repeat the old moral arguments). That seems to be the historical trend; a lot of things that were once seen as morally critical become morally neutral or even not a moral issue at all. As a couple of examples: whether there were humans on the other side of the Earth, the shape of the Earth, the significance of comets and eclipses, the efficacy of curses and magic, whether vaccination thwarts the will of God, or theories of mental illness.

You feel that origins form the basis for morality because your particular subgroup of the larger religious tradition in which you were raised has a particular origin story and emphasizes that belief in that story is inextricable from belief in the moral legitimacy of the tradition as a whole. Not even the majority of those that share your general faith see things that way. Instead, they regard the story as allegorical, or poetic, or as a historical belief important to a very different culture at a very different time. People outside your larger religious group are unlikely to be convinced by such an argument either. Instead, they see you railing against the immorality of a belief that they don’t see as having any more moral dimension than gravity, electromagnetism, geocentrism, or blood transfusion.

Consider your belief that the travel centroid of the world is at or near Jerusalem or Tel Aviv. You seemed to attach no small significance to this, akin to the medievalists who believed that Jerusalem was the center of the world because it was God’s Favorite Spot. I recall that it has come up here more than once. Now, a few minutes’ research shows that this is not true; the center of landmass is in Turkey somewhere, the population center is in India somewhere, etc. If you could be convinced that the travel centroid was in fact not Tel Aviv, but some other place (at this point I doubt you would believe that, but don’t fight the hypothetical) I doubt that you would consider that other spot to be God’s Own Favorite Place on Earth. Rather, I suspect that you would shrug and say ‘enh, another trivial factoid of interest to geographers only’. Of course, if your sense of the moral importance of Tel Aviv being central was high enough, you would continue to fight against any evidence to the contrary as being proof of the hubris of sinful Man in the face of the revealed truth of God. You might even argue for a distinction between mere map geography that show you how you get from place to place, and origin geography, which forms the basis for morality.

I am not yet prepared to discuss the “science-shattering” implications of the Michaelson-Morley experiment, that seemed to suggest the earth was immobile – or the General Theory of Relativity, which, in contrast to the Special, also seems to suggest a fixed earth. But remember: earth is the center of Divine Attention.