The Philae probe settled into deep sleep in her shaded resting place on Comet 67P/Churyumov-Gerasimenko. But before she slept, she sent back information on her most important finding to date. The “atmosphere” (or what passes for one) of the comet holds organic molecules. This finding revives an old debate on how life came to earth. Did life arise on earth? Or did comets bring it to earth?

The first report on the find comes from Victoria Bryan, of Reuters. She filed the report from Berlin at about 17:00 UTC (18:00 CET). According to that report, Philae’s COmetary SAmpling and Composition (COSAC) apparatus detected the organics in the gases that surround the comet. Philae also tried to drill into the comet’s “ground” using its MUlti-PUrpose Sensory (MUPUS). But perhaps before the drill could pass a core to COSAC for analysis, Philae ran out of battery power and had to send all the data she had and go to sleep.

ESA does not seem to have published any general press release about this find.

Bryan’s sources in ESA did not know whether COSAC found anything as complex as the primary structure of a protein in the gas analysis.

Bryan hinted that ESA hopes to find clues to the origin of life on earth. The Philae scientific team specifically wishes to test the theory of panspermia. According to this, comets “seeded” the stuff of life, and perhaps life itself, on earth (and maybe elsewhere).

Walter T. Brown, Ph.D., runs the Center for Scientific Creation. He challenged the panspermia idea as unworkable. In a telephone interview with this Examiner, he pointed out any living creature riding to earth on a comet must survive lethal levels of radiation throughout the solar system. This radiation gains more killing power as a comet dives toward the sun. Furthermore, Brown was at a loss to describe how such a creature would eat (and what it would eat), and reproduce without a supply of liquid water. (Note: the MUPUS drill reached in about 20 centimeters before hitting a hard surface. European Space Agency (ESA) scientists believe the MUPUS drill went through a 20-cm dust cover and hit ice. The lead MUPUS scientist expressed surprise at finding such hard ice.)

Finding organic molecules on a comet is not new, Brown said. The first such finding happened in 1868, as Carl Sagan mentioned in his book, Comet (New York: Ballantine Books, 1997). At the time, investigators suggested these molecules came from decomposed organic bodies. More recently, NASA scientists discovered glycine, the simplest amino acid, on Comet 81P/Wild 2 in 2009.

Those findings aside, earlier space probes have found only the simplest organic molecules, like methane, ethane, propane, and cyanide, on comets. (The evidence for this comes from spectrography, not from anything as sophisticated as COSAC.) Finding amino acids, and especially amino acids more complex than glycine, would “prove” a living origin.

An earthly origin for comets 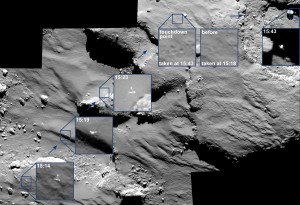 A mosaic of images, by the Rosetta cometary orbiter, showing where the Philae lander touched down, bounced, rolled, and came to rest on Comet 67P/Churyumov-Gerasimenko. Photo courtesy ESA/Rosetta/MPS for OSIRIS Team MPS/UPD/LAM/IAA/SSO/INTA/UPM/DASP/IDA

“Still,” said Brown, “if I were a betting man, I would bet even something as simple as methane came from life. For where else will methane come from? You can get methane on earth, from rocks and liquid water. But [Comet 67P/Churyumov-Gerasimenko] has no liquid water.”

But where did this life come from? Brown cites his Hydroplate Theory of the Global Flood. According to this, the Global Flood happened when a subcrustal ocean broke containment where the Mid-Oceanic Ridges now stand. But this did not break only through the ocean floor. Instead the Flood waters broke the Americas apart from Europe and Asia and created the Atlantic Ocean. In the process it launched vast amounts of water, rock and mud into space, at escape speeds. This material became the Mavericks of the Solar System, including comets. And some of the material would have included uprooted trees and shrubs, trapped animals, and other specimens of living things.

In sum, Brown says, life did not come to earth by comets. Instead, life escaped from earth with the comets.

Brown suggested Philae, if she wakes up, should use the COSAC system to answer two questions, if it can. First, how complex are the organic molecules she found earlier? Amino acids, said Brown, would be a good class of candidates. (Note: carbohydrates, including mono- and disaccharides, would be another class.) Second, are these molecules in racemic mixtures? Amino acids and carbohydrates in living things are not racemic. Life uses only L-amino acids and D-saccharides (hence the name dextrose for the form of glucose the body uses, not its opposite, levose). Glycine, the only symmetric amino acid, is the only exception.

Philae, as far as ESA can tell, rests in deep shadow. Of course, ESA intended Philae to land on a sunlit surface. She did, but she bounced and drifted to the shaded area.

(See also the Rosetta blog and the ESA image directory.)