Have authorities now found wreckage and bodies from Airasia Flight QZ8501? Perhaps. And now that occupies the media’s time. That, and how a “fly by wire” airliner like the Airbus A320 can lull a pilot into complacency. Can a pilot lose his “feel” for his aircraft? Perhaps, if the control systems differ little from a video game or the current version of “Microsoft Flight Simulator.” But does that explain the loss of Flight QZ8501? Another commentator doesn’t think so. He wonders whether the pilot committed mass murder and suicide.

Walid Shoebat shared his suspicions earlier today on his own site. He did one thing maybe no other journalist covering Flight QZ8501 has done so far. He did not content himself with reading English-language reports about Flight QZ8501 or biographies of its pilot, Captain Iriyanato. The BBC, for instance, describes Iriyanato as a “professional and experienced” pilot.

That did not satisfy Shoebat. So he looked for an Indonesian-language report. And found one. That report describes Iriyanato as not only a pilot but also a “diligent Muslim” and member of the board of the mosque local to his home. Shoebat gives us these translations from Indonesian into English:

“Iriyanato was also active in the community as a board member and chairman of the mosque at his residence in Pondok Jati Block BC 12 Village Pagerwojo, Buduran, Sidoarjo.”

“In addition to serving as Chairman of RT 39, Iriyanato also served as a board leader of Masjid Nurul Yaqin, which is located in the housing complex.”

“He was also diligent in worship. When everyone was at home, he would certainly be seen praying in congregation in the mosque”.

Shoebat found more than that. He found Iriyanato’s background before he got his air transport rating. Many airline pilots begin as military pilots. So did Iriyanato. But what sort of unit did he fly with?

Iriyanato “performed operational tasks from 1983 up until 1992″. It was such fighter jets from Indonesia that were used over East Timor and were operational till September of 1999 killing some 200,000 mostly Christian Timorese out of a total population of 600,000 which has been winked at by western powers and today western media said nothing about this pilot’s involvements?

Shoebat speaks the truth. American media organs have not said one word about the career Iriyanato had before he got his transport rating and started flying for Airasia. Instead they tell us a pilot who trained on and flew jet fighters might train on a digital fly by wire aircraft and grow so complacent he would forget he was flying an airplane. They want to explain the loss of Flight QZ8501 that way. They even suggest he made the same mistake an Air France pilot made over the South Atlantic, causing his flight to stall out and ditch in the sea, killing all aboard.

Now look here. A former fighter pilot literally loses all concept of flying an airplane when he flies by wire? American astronauts flying the Space Transport System did not make that kind of mistake. Those “Space Shuttles” also had digital fly by wire systems, the first anyone ever used. Those astronauts had the same background Iriyanato had: they flew fighters. Some flew experimental aircraft. A pilot who flies that kind of aircraft will never forget he is flying an airplane. Not if he has any pride in having “The Right Stuff,” he doesn’t. But Fox News Channel, the BBC, and almost all other media organs really want us to believe that. They suggest a man like Captain Iriyanato would lose his “Right Stuff” to that extent. 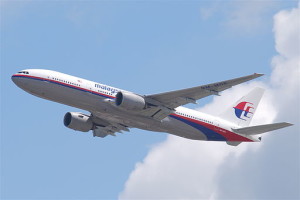 A Boeing 777-200ER belonging to Malaysia Airlines. A plane like this, as Flight MH 370, was lost at sea in April of 2014. Credit: User Aero Icarus (Zurich, Switzerland)/Flickr, CC BY-SA 2.0 Generic License

Shoebat reminds us about another Malaysian flight that disappeared over water. Does anyone remember Flight MH 370? Shoebat does. And he point out several disturbing parallels between Flight QZ8501 and Flight MH 370.

This much we all know:

Add this: the captains of Flight MH 370 and Flight QZ8501 both professed the Muslim faith and both practiced it in a “diligent” way.

Shoebat at first speculated both pilots literally stole their aircraft, in acts of air barratry. (The captain of any ship or aircraft commits barratry when he steers his craft on a course, or to a port, other than where his boss wants.) If authorities now have wreckage and bodies from Flight QZ8501, that makes such air barratry less likely.

But if either or both pilots committed mass murder and suicide, they both would have earlier precedent. EgyptAir Flight 990 ditched in the Atlantic in October of 1999. The copilot said something the cockpit microphones picked up:

I do this in the name of Allah.

Authorities recovered the “black boxes.” They showed Flight 990 went into a steep and fatal dive. The captain tried to pull the flight out of that dive. The copilot put the plane into the dive and kept it there.

Less than two years later, two airliners flew into World Trade Center Buildings 1 and 2, a third airliner dived into the Pentagon, and a fourth dived into a farmer’s field in Pennsylvania.

Again, remember the words of the late Ian Fleming:

Once is happenstance; twice is coincidence; and the third time it’s enemy action.

They’re not likely to; most likely they will consider those associations only coincidental. Even had the plane disappeared with the pilot shouting ” aleheu akbar” (and yes, I know I spelled that incorrectly), it would have been determined that he was a lone perpetrator of workplace violence. Our media has a great deal to answer for.