Britain’s Prime Minister David Cameron responded to the terrorist attack in Sydney, Australia, in which two of more than 17 hostages were killed by an Islamic extremist. Referring to “lone wolf terrorists,” he said this was a reminder of danger that Britain faces. It would seem to me that we have had enough Lone Wolves to constitute a substantial wolf pack, and enough “extremists” to consider them “conventional.” How many people must die before heads of state concede that the crimes worldwide are not extreme, not unusual, and not lone wolf? This is Islamic-style warfare against the West, without the sophisticated weaponry, khaki uniforms or tanks. It is time to connect the voluminous dots between the burnings and beheadings in 624 AD and those executed today.

Too many ‘lone wolves’

We so naively call them self-starters or lone wolves when daily thousands of individuals are inspired and encouraged by an imam in a mosque to be a Soldier of Allah, eagerly awaiting his turn to immerse himself in the blood of infidels. Perhaps the designation helps the West cope with the 1.3 billion Muslims who have unleashed their millions into the world. Perhaps the singular terminology keeps the West from considering war against the multitudes, or courageously declaring the Qur’an and Sharia antithetical to Western beliefs, or fear of inciting the so-called moderates to reach their full barbarous potential. 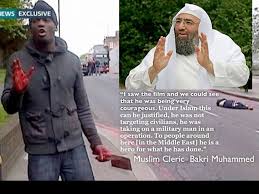 Must someone remind PM Cameron of the infamous 7/7 bombing of 2005 in London’s underground, or the new converts to Islam who beheaded British soldier, Lee Rigby, on a London Street? Consider America’s Major Nidal Hasan, the psychiatrist who killed 13 and wounded 28 at Fort Hood, Texas; the Tsarnaev brothers, who killed two and injured more than 260 athletes and spectators at the Boston Marathon; the Itamar massacre of five members of Israel’s Fogel family and the more recent beheading of four rabbis and a policeman during religious services.

The truth: a pack of wolves

It is time to come to terms with the truth – that self-radicalization is a myth to befuddle the reality of the demonic cult, where the lone wolf is not alone but, rather, a product of Islam, trained from birth or conversion to hate and kill. The West has chosen to disbelieve the incomprehensible because this is an army unlike any we have fought, with different rules, and different means of carrying out their depraved agenda of enslavement, torture, and destruction. Not clad in khaki uniforms, these demons may be disguised as normal humans in street clothes, prepared to strike with the simplest and smallest of weapons – a knife or a vial of acid.

While the situation is deteriorating rapidly, the West is turning out students who are ignorant of Islam. Taught by the left, liberals, Marxists, and Islamic apologists, from revised textbooks, our students are indoctrinated to believe that Islam is Religion of Peace, when in fact it has been a religion of conquest and cruelty for 14 centuries. The history books paint and polish Islam while tarnishing Judaism, Christianity and America, omitting or changing facts that might expose the malevolence in our midst. Our media aids and abets these efforts with the accusatory “Islamophobia” to keep the crimes underreported or swept under the rug. Ask the average college students about Islam’s history and they will probably respond with a dead stare followed by an uncomfortable giggle at their own ignorance.

No, the murderers are not lone wolves. Whether they come as one or as nineteen, they are still part of a larger pack, each with his duty, just as we send our tanks to the front, each with its own driver and gunner, but part of a greater army. Whether the Muslims rush a synagogue to behead people in prayer; or behead hundreds who refuse to pray to Allah; or throw acid at little girls in Israel; or beat Jewish youths on the streets of Paris or Brooklyn; or explode themselves or ram an auto into a crowd of people, or kidnap girls for sale or marriage/enslavement, or rape women on the streets of Sweden and Norway; or burn or stone women, or behead their own daughters for “honor,” they are One. Whether they are ISIS, Hamas, Hezbollah, Boko Haram, Taliban or any of a formidable number of terrorist groups, they are all Islamic terrorists.

The making of a pack of wolves

Each new generation is taught from toddlerhood to hate and aspire to Islamic greatness by killing Kafirs – Jews, as well as Christians, Hindus, Buddhists and other Muslims.

A recent survey showed that 80% of Palestinians support murder. I would propose that the remaining 20% are, as Marco Polo is alleged to have said, “the moderate Muslim(s) who hold the feet of the victim.” Where there are Muslims, there is violence with the expressed objective that Islam will rule the world, with Sharia law imposed over the host country’s laws. If it cannot be done peacefully, they will do so sadistically. They are raised in a teamwork environment, faces covered for guilt-free anonymity. The reality is that all these terrorists are indoctrinated from childhood to sacrifice their individuality for an organization, and are probably psychologically incapable of acting as lone wolves.

[…] two before being killed. Politically correct media reported on his “insanity” and being a “lone wolf”, but in fact, Islam drove his actions toward […]

It doesn’t matter how many lone wolves you have; they’re still not a pack. A hundred lone wolves is not a pack. Three wolves working together is. Please use language correctly.

And how do you know no one is co-ordinating their efforts. He who incites, co-ordinates. Ever think of that?