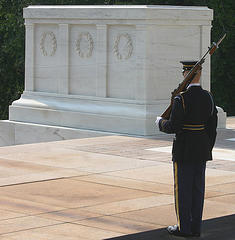 “Arlington Cemetery, where it is said ‘reverence and perfection meet.’”

A visit to Arlington National Cemetery

This past week, my ministry family and I mandated some time from our college and school tour to go to Arlington Cemetery in Arlington, Virginia. We are always putting before our eyes the price paid for the freedom we, as a nation, enjoy (Galatians 3:1).

Arlington is the place where men and women in the hundreds of thousands, who have made the ultimate sacrifice for you and me, have been laid to rest (John 3:16).

It is also a place of remembrance of the price paid for the freedoms for every American. It is, without a shadow of a doubt, the most honorable place to be buried, and the most sobering. It is the most hallowed of ground. It’s a pantheon of heroes, a pantheon of tragedies, a place of civil worship, a place of honor to those that paid the ultimate price – with their lives and with their blood – which sealed the idea of the Republic (Article 4, Section 4, United States Constitution).

Arlington is also a place that reminds us of those who are still defending the idea of our Republic.

Looking upon the Tomb of the Unknown Soldier, you see respect from the living for the dead (Matthew 22:32).

In guarding that tomb, the military honors the dead by teaching others to live for what they died for (2 Corinthians 5:15).

The tomb of the unknowns – a fitting illustration of the price of freedom. Photo: User dbking/Flickr, CC BY 2.0 Generic License.

Did you know that before these guards were privileged to guard the Tomb of the Unknown Soldier, they had to first pass a high-level, stringent test? They had to receive the tomb badge (2 Timothy 2:15; Romans 13:14).

Details are so minute, that burning off frayed edges with a lighter and eight hour shoes shines elevates uniform preparations to a realm somewhere between art form and obsession.

Mistakes on the uniform are called “gigs.” Any measurement that is off, any piece of lint that is on the uniform is a “gig.” To be off one-sixty-fourth of an inch is a gig. A button crooked is a gig. A medal not shiny is a gig. The guard must make sure before guarding the Tomb of the Unknown that everything he has is ready to go. Again, attention to details is incredible. To be off one-sixty-fourth of an inch is too much (Philippians 1:10).

The reason for this level of perfection is that these soldiers represent 315 million Americans. They are declaring America’s gratitude not only to those that have lost their lives and identities, but also to those who serve our country today.

One soldier said, “I think we have the right to expect as close to perfection as possible.” Remember the motto? “Where Reverence and Perfection Meet.”

“When walking out into the public eye, it is a very solemn and intense thing to do,” said one soldier. “It is amazing to look at the tomb. It is amazing stuff these individuals died for – our country, our freedom, and our liberties (2 Corinthians 5:15).” 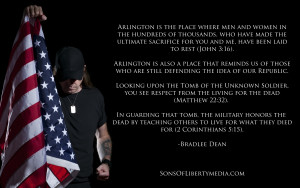 One guard said that the older veterans go up to the Tomb of the Unknown Soldier and leave teary-eyed. Why? Because they know the price; they saw their brothers die magnifying the laws of our Constitution against crime both here and abroad (Isaiah 42:21); they saw the blood that was shed on foreign battlefields to ratify the American Constitution (Hebrews 9:22).

One soldier said that getting prepared is rigid. He explained that you couldn’t back up and do it all again once you make your showing (2 Corinthians 13:5). He said they have to do it right the very first time. Before they appear before the people, they go through a laser-eyed inspection. Fifty different aspects of their uniform are inspected before they can guard the Tomb of the Unknown Soldier (2 Timothy 2:19).

They also know that once they achieve the absolute perfection and acceptance of their superiors, if they do not hold up the standard of what is expected of them, their names can be removed from the wall (Hebrews 6:6).

After the guards do a little mirror time (Romans 3:20), they head out for the guarding of the Tomb of the Unknown. They remember that the public will be watching (1 Corinthians 11:1).

The guards are tested on their posture, their timing, and how they hold their weapons (Hebrews 4:12). The men see every aspect of guarding the Tomb of the Unknown as an offering (John 15:13).

The tomb guard’s product is military precision. They are part of the honor guard, which is the full labor of love these soldiers bring to the tomb. It is their present, their gift.

Once they pass the ultimate test, they are then entrusted with a task that they all see is a sacred honor – a duty that reflects the standard that the entire company seeks to meet.

Arlington is where reverence and perfection meet. So should it be all the more to the Church, who represent the living (Revelation 1:8). For, again, we serve the God of Abraham, Isaac and Jacob – the God of the living, and not the god of the dead. How much higher should that bar be raised in the Church?

Next week Part 2: We will contrast the Church in America to America’s military.

When The President Attacks Americas Military!

Drawing The Line with Corruption That Desecrates the Price Paid!