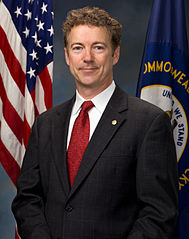 Senator Rand Paul (R-Ky.) said on his website today: he will run for President. He sent a message on his site: “defeat the Washington Machine.” In defining where he stands on issues, one cannot use the traditional one-dimensional spectrum between “liberal” and “conservative.” Rand Paul stands mainly with libertarians. With this difference: let an external enemy declare itself, and Rand Paul will vote to fight that enemy. Even if traditional libertarians don’t like that.

The Los Angeles Times gave the time and the place where Rand Paul will speak to the people: noon today (CDT or EDT; the article does not make clear which) at the Galt House in Louisville, Kentucky.

CNN and The Washington Post filed two separate reports on  where Rand Paul stands on foreign-policy and other issues. The Post spoke of Rand Paul “straying” from the classic libertarian stand, and where the Senator has stood before today. CNN put it as a difference between Rand Paul and his father Ron Paul (former Representative from Humble, Texas).

The CNN article includes a video that allows one to compare father and son side-by-side:

These differences show a pattern. CNN described the pattern thus: Ron Paul stands on “pure libertarianism”; Rand Paul wants to win. CNN would do better to describe it this way: Ron Paul embraces a key libertarian holding: no enemies but what we make. Rand Paul will accept evidence of an external enemy.

The Constitution of the United States grants to Congress “the power…to declare war.” (Article I, Section 8, Clause 11.) Each man has said so on the floor of his chamber of Congress. So both men agree: neither Barack Obama nor any other man acting as President has the authority to order troops to attack without the advice and consent of Congress.

Where, then, do they differ? Ron Paul would not declare war until the first warhead or artillery shell or bomb hit, or the first soldier put his or her obstreperous boot over the American border. Rand Paul would not wait that long. Rand Paul recognizes a concept Ron Paul, and other libertarians of like mind, refuse to recognize: an external enemy. More broadly: Ron Paul made up his mind long ago: “I don’t wanta study war no more!” Rand Paul did not make up his mind. He merely objects to having a President, any President, make up his mind for him. And as President, he will not make up the mind of Congress.

What chance does Rand Paul have? 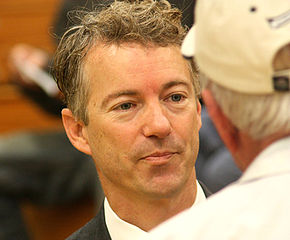 The Senator added a widget to his home page today. It gives a running tally of money he has raised from small donations. As of 10:50 a.m. EDT, that tally reached $53,550.88. Five minutes later that tally rose to $53,787.04. He’ll still need to raise money much faster than that.

Senator Ted Cruz (R-Texas) also wants to raise money from small gifts. Both men announced their runs this soon for the same reason. Their rivals hope to “milk” the “SuperPAC cow” for as long as they can. Maybe Rand Paul does not think any SuperPAC would want to help him. Or maybe he does not want any small group of donors to tell him what to do.

Either way, he must convince voters he can do what he talks about doing. Gov. Scott Walker (R-Wisc.), for instance, has done things. Things no one else thought anyone could. Like making Wisconsin a right-to-work State. Rand Paul has the same problem any Senator has: a lot of passion, but no executive experience. But that did not stop John F. Kennedy from becoming President. (Or, sad to say, Barack Obama, either.)

Rand Paul does have one thing Ted Cruz does not have. He qualifies fully as a natural born citizen, as Emmerich de Vattel defined that term. He was born in-country. Both his parents were citizens at the time of his birth. Every President, except only Jefferson, Arthur, and now Obama, has so qualified.

Time alone will judge whether Rand Paul can convince enough people, first to give him money, then to vote for him.

GO RAND, just watch your back!