A new movement begins this week to ratify an old Constitutional amendment. Those who direct it, hope to “pack” the U.S. House of Representatives. To do this, they aim to force the House to expand to a membership of more than six thousand. That’s all very well. But the text of the amendment they think to resurrect, has a fatal flaw. If they do not repair it, they will accomplish nothing.

The first Bill of Rights

The country forgot about those two, until the last few years. One of these two amendments says Congress can raise its Members’ salaries, but only for future Congresses. That Amendment languished for more than two years. Then on May 7, 1952, the last of three-fourths of the current fifty States finally ratified it.

The movement, calling itself America Again, now concentrates on the other Amendment.

A sliding scale for the House of Representatives

This Amendment now has eleven ratifying votes. The America Again organization seeks to get twenty-seven more ratifying votes. To get those, they launched a campaign yesterday (Tax Day, April 15, 2015)  and a “crowdfunding” campaign today. Once those twenty-seven votes come in, they believe, Congress must accede to a House of Representatives having at least one representative for every fifty thousand persons. The membership of the House would swell at once to six thousand Members or more. (The 2010 Census gives the U.S. population at more than three hundred million.) As per the Permanent Apportionment Act of 1929, the House of Representatives has 435 Members. (See also this article by Tim Brown at Freedom Outpost, and this article by Joel McDurmon at American Vision.) America Again seeks to ratify this amendment as one part of a twenty-point plan to reform Congress. 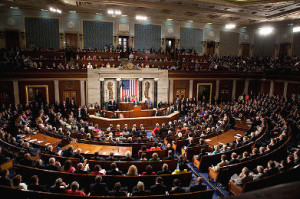 America Again concedes one disadvantage of their plan. Instead of 435 Representatives, and their offices and staffs, American taxpayers would have to fund 6,000. America Again seeks to curtail the expense by limiting Congressional staff to two employees for a Representative and four for a Senator, plus one office at home. What they would do with the Cannon, Longworth, and Rayburn House Office Buildings, and the Dirksen, Hart, and Russell Senate Office Buildings, they won’t say. They do plan to limit the in-Washington meetings to ten days only, and require Members to “meet virtually” using modern teleconferencing or other “virtual meeting” technologies. Skype.com might offer a way for Congress to “meet virtually” in this way. Or someone could design a more elaborate kind of teleconference: a Massively Multiplayer Online Role Playing Game, running on OpenSim, the open-source substitute for the Second Life engine. (The C-SPAN family of channels could easily send the feed from one such MMORPG to cable TV systems nationwide. But how they would hold hearings and summon witnesses, America Again does not discuss. Let the reader imagine how a “Truth in Avatars law” would read, to let a witness authentically “virtually appear” in a “virtual hearing room” in the “virtual capitol” before the assembled “avatars” of Members of a House or Senate committee. At least the kind of unruly demonstrations several House and Senate committees have had in their hearings, not to mention bomb threats, could no longer happen.)

They seek to swell the size of the House for one reason above all: “lobbying” as many as six thousand Representatives would break even the fattest of banks. Wealthy individuals and companies could still lobby Senators. To curtail that, America Again proposed to repeal Amendment XVII and have State legislators directly choose and instruct Senators. Even without that, a lobbyist would have to travel to the home State and to every congressional district! And even Alaska would have as many as fifteen Congressional districts. Let the reader imagine a nattily-dressed lobbyist trying to gallivant around to several rural Alaskan towns. Even the head writer for the television show Northern Exposure never imagined a scenario like that.

Furthermore, each Representative would need to gather a majority vote among fifty thousand people, not the more than six hundred eighty thousand they typically represent today. They could campaign with light budgets and could comfortably campaign door-to-door. And door-to-door tends to make the strongest impression, good or bad, on any voter. Most radio and television markets would span far too many Congressional districts for advertising in such markets to make an impact. A Representative would have to stay connected to his “district culture.” Neighbors would see him go to church every Sunday, or temple every Saturday (or, in rare cases, mosque every Friday), etc. An incumbent would know he must hold Town Hall regularly to get his “second term.” After that, the seat falls “open.” America Again also would limit Congressional terms of office to two terms each for a Representative and a Senator. (And remember: legislators, not voters, would choose Senators.) America Again says nothing about plans to make Senators or Representatives recallable by the legislatures or voters who sent them to Congress.

But all of it could come to nothing. First, America Again must raise the funds for their campaign to push this amendment through twenty-seven legislatures. But let’s assume they could do this. What would they have? “Not less than two hundred Representatives, nor more than one representative for every fifty thousand.” More. Not less, as it perhaps ought to have read.

This Wikipedia article shows two versions of the text of the Amendment. The article discusses these two versions here. According to this, the original proposal did say “less than one Representative for every fifty thousand persons.” The House passed a resolution to change the word “less” to “more.” That critical change alone, defeats the purpose. See here for details.

CNAV reached out to David M. Zuniga, CEO of America Again, for comment. He did not reply at time of initial posting. He did, however, reply by telephone at length, about two hours later. He suggests the American people will believe the language of the Congressional Apportionment Amendment does in fact call for a 6,000-plus-member House of Representatives. They will insist upon it. Furthermore, Mr. Zuniga and his staff have prepared new apportionment maps for all fifty States to allow elections for a much-enlarged House to take place as rapidly as possible. The new House, he is sure, will easily pass new laws to require Congress to stay home and meet virtually. (Under the Constitution, the House may pass whatever rules it pleases as to where and when to meet, and what rules of order to follow. But neither House may adjourn sine die without the consent of the other. Mr. Zuniga did not discuss that detail. But CNAV confidently expects America Again to consider that, and all other details, when and as they become relevant.)