As this series is nearing a conclusion, I would be remiss if I didn’t include the “support for evolution” that our children are led to believe is scientifically credible. This article will not continue with counterpoints for the popular Biology textbook published by Pearson/Prentice Hall, but will present counterpoint arguments for the ancillary information our students are directed to on the internet and outside of the textbook. The future and final part of this series will then deal with the most significant proofs for the biblical account of creation. Whether it be the so-called proofs for evolution or the counterpoint proofs for the biblical account, please be aware that only a selected few that are representative of the rest will be discussed, and to respect this format, I will do my best to keep the narrative brief.

Lucy is often paraded as the best evidence for evolution. The widely accepted argument is that she represents a transitional fossil bearing evidence that apes (or in this case, chimpanzees) evolved into modern day man by acquiring the ability to walk upright, referred to as bipedalism. In a PBS article entitled “Meet Lucy”, Dr. William Kimbel, a physical anthropologist at the Institute of Human Origins and Arizona State University acknowledged Lucy as being perhaps the most famous fossil of all time.

The fossil remnants now known as Lucy, were discovered by Donald Johanson in Ethiopia. At 40 % complete, she is the most complete remains of what is purported to be human ever to be found. Lucy is classified as an Australopithecus afarensis, and believed to have walked upright, which has led many to the conclusion that she is a transitional fossil between monkey-like creatures and human beings.

What’s missing from the argument?

First, the information widely circulated would have you believe that since Lucy is 40% complete that the interpretation of the fossil remains are indisputable. Nothing could be further from the truth. While 40% of Lucy’s remains have been found, many of them are fragmented and require reassembling, which, as you might imagine, is done according to the evolutionists’ ideology. For example, Lucy’s skull is completely shattered – as are her arms and legs; her face and feet are completely missing as is the foramen magnum, where the skull is attached to the spine. These missing or shattered remnants are critical to determining the bipedalism of Lucy.

The importance of her skull and how it is connected to the spine is anatomical evidence of whether or not the creature in question walked upright. Skulls of monkeys and apes are attached in a different manner than those of humans in order to accommodate whether or not they walk upright or on their knuckles.

As for her feet, which would be the final piece of evidence required to determine whether or not she was bipedal or a knuckle walker, Mark Leaky discovered footprints that appeared to be human in Laetoli, Tanzania. For those that are geographically challenged, Tanzania is another country. Lucy’s remains were found in Ethiopia, a mere 932 miles from Laetoli, Tanzania. But since they were human footprints and Lucy was a chimp with her feet missing, of course the conclusion drawn by evolutionists was that these were Lucy’s feet, which proves she walked upright and therefore is the missing link they longed to find.

The final absurdity that demands acknowledgment is Lucy’s pelvis. The pelvis of chimps and humans are very distinctive. They are designed to support the specimen’s weight, which for humans is upright and for chimps is more horizontal. Lucy’s pelvis was badly damaged. Not a problem for the creative evolutionists. In a PBS special and video still available on YouTube , Owen Lovejoy demonstrates on camera how Lucy’s pelvis can be “restored” to its human configuration.

He does this by presenting the argument that Lucy must have fallen in the mud where a deer stepped on her pelvis and damaged it. Lovejoy had a cast made of her pelvis and right on camera files it and reconstructs it make it look human – fully expecting the viewing audience to accept this outrageous scam as bona fide evidence, when in fact much contrived intervention was needed to achieve the results evolutionists desired – including filing the fossil. If a deer, or any other animal actually did step on Lucy’s pelvis, are we then to accept that some way, somehow that animal managed to alter or file the remains as necessary?

(Biston betularia) This example of evolution still appears in many Biology textbooks today. Prior to the industrial revolution, the species included coal-black moths, referred to as “melanic” and the peppered kind that included a mixture of light gray and black scales giving them a peppered appearance. After the industrial revolution, there was a population shift near the city of Manchester, England where the melanic form represented 90% of the species. The conclusion: The moths evolved from the peppered type to the darker type because when they landed on trees in the heavily polluted air of Manchester, the darker type escaped their predators by camouflaging their color to blend in with the trees, thus proving natural selection. 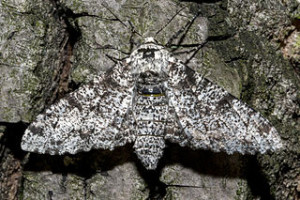 Although many experiments had been conducted to support the evolutionists claims, subsequent investigations have shown substantial flaws in the experiments. For instance, today it is easy to find in some Biology books as well as the internet many pictures of these moths positioned on trees. What you are not told is that the pictures were staged. The moths were either pinned or glued to the trees. Why is this important? In 1984, Finnish zoologist Kauri Mikkola reported the results of his experiments that concluded: “the normal resting place of the Peppered Moth is beneath small, more or less horizontal branches…” Other subsequent experiments showed that Peppered Moths rest where they are hidden. In other words, Peppered Moths do not rest on trees!

The whale that walked on land (Tiktaalik)

In a NY Times article dated April 6, 2006, entitled “Fossil Called Missing Link From Sea to Land Animals” written by John Noble Wilford, Mr. Wilford reported that the fossils of a 375 million-year-old fish (according to the evolutionists’ time scale) was found having the traits of a transitional creature, based on the skeletal remains of forward fins that evolutionists claimed were “the beginning of digits, wrists, elbows and shoulders, as well as a flat skull resembling a crocodile’s, a neck, ribs and other parts that were similar to four-legged land animals known as tretrapods.” The article stated that this made it a predecessor of amphibians, reptiles and dinosaurs, mammals and eventually humans. It goes on to claim what has been repeated by evolutionists ad nauseam since then:

Whales, like all mammals, evolved from reptiles, amphibians, and fish. Thus, over hundreds of millions left the sea, grew legs, grew fur, and evolved lungs. Then they returned to the sea, lost their legs and fur, but kept their lungs. 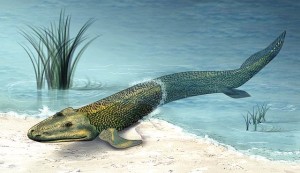 The counterpoint to this is rather simple. Do they really expect us to believe that the giant creatures we know as whales were able to walk on land on nothing more than underdeveloped fingers, wrists, elbows and shoulders? It would be more than a stretch to just believe that they were able to walk on fully developed bones such as these, given the weight of these massive creatures. And if these were transitional fossils, why can’t we find whales with these fully developed anatomical features – either on land or in the sea? After all, should the impossible become possible and they were able to walk on land, shouldn’t the fossils of these more successful species be found somewhere in the fossil record?

Additionally, the last quote set in italics above requires more of a chuckle than an explanation. Are they really asking us to believe that as incredible as it would be to have a whale walk onto land, they are asking us to believe this same creature grew legs and fur and then evolved lungs – after which they returned to sea, lost their legs and fur but kept their lungs. Whew…that’s a whole lot of evolving – or should I say “believing”!!!!!!!!!!!! And all of it is based on faith and not fossil evidence. We have no evidence or fossil remains of whales living on land, growing legs, growing fur, and evolving lungs. Do evolutionists even have a clue about how intricate organs such as lungs are and what it would take for a fish to develop lungs and the respiratory system that goes with them? And the most ludicrous assumption of all is perhaps that after they did all of this they somehow miraculously returned to the sea and reverted or should I say “devolved” back into a whale that didn’t have any legs or fur.

Once again I have to end with a quote by the late Dr. Duane Gish, just because I can’t say it better:

It is unbelievable what unbelievers have to believe to be unbelievers.

Science and Torah in parallel