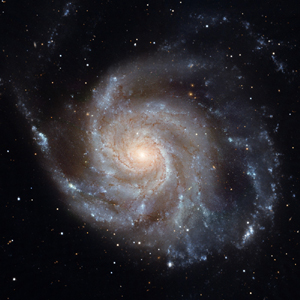 This final article in the Counterpoint series will deviate from presenting arguments against what has been published in Pearson/Hall’s Biology textbook and will instead present a few very basic arguments that support the biblical creation account. Before proceeding, it is responsible to state that the counterpoint arguments against what is presented in the textbooks are not represented as being comprehensive. In order to achieve that nearly unachievable goal would require a substantial format capable of expanding ad infinitum, since new evolutionary arguments that are not bound by logic are being invented at an inconceivable rate. It is also necessary to state that the Precambrian explosion of life, as well as the RATE project that were discussed in previous parts of this series, as well as many others (such as thermodynamics) not discussed also provide strong support for the creation argument.

To conclude this series, the Big Bang theory has been chosen since it is often one of the most misunderstood arguments for biblical creation that has been twisted to support evolution instead. I will begin with a short history to explain the theory and its origins.

Big Bang – how it began

In 1927, Georges Lemaître, a Belgian priest and a professor of physics, astronomy, and mathematics, based his ideas about the origins of the cosmos on his understanding of Albert Einstein’s theory of Special Relativity. He believed there had to have been a beginning to the universe. This was the beginning of what we now call “The Big Bang Theory.” Then in 1929, Edwin Hubble discovered through direct observation that the galaxies are receding in every direction at speeds directly proportionate to their distance from Earth. These observations confirmed Lemaître’s ideas, since it was logical to assume that going back in time the universe was much smaller – so small that in fact it had to have had a beginning. 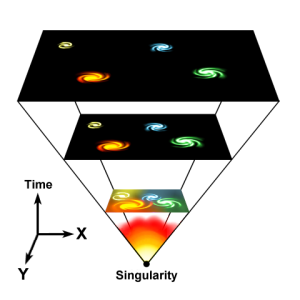 Diagram of the expansion of the universe according to the classic Lemaître Big Bang theory. Graphic by User Fredrik on Wikimedia Commons, released to public domain

Then residing as pontiff was Pope Pius XII, who immediately realized that this development bore evidence that the universe had a beginning – contrary to what Einstein believed. And the Pope became very vocal about broadcasting his point of view as supporting the biblical account – so much so that Lemaître had to beg him to stop because his comments were offensive to the scientific community. Of course their offense was based on how this new information supported Genesis 1:1.

It is truly unfortunate that the Pope listened to Lemaître because this allowed evolutionists free reign in twisting the facts that supported the beginning asserted in Genesis to now support evolution. Add to that the general public’s idea that the universe began with an explosion instead of an expansion, and the biblical support that should be touted has become so obscure that many creationists won’t go near it with a ten-foot pole.

You may be wondering why the distinction between expansion and explosion is so important. The most cogent explanation is that expansion is observable while an explosion is nothing more than a misnomer coined by Sir Fred Hoyle who used is derisively . Remember, it was Edwin Hubble that discovered in 1929 that galaxies are receding from each other in every direction. Hoyle (in spite of the evidence) remained loyal to the static universe theory that simply assumed that the universe has always existed without a beginning – an assumption that all evolutionists wish they could claim – and mocked the evidence by labeling it The Big Bang.

In addition to the Bible clearly stating in Genesis 1:1 that there was a beginning, it also predicts expansion. However, this is easy to miss since the word “expansion” usually was not used by Bible translators – with a few exceptions. On day two of the creation account, many Bible translations use the word “firmament.” Other translations use the word “expanse.” The word in the original text is “raqiya”, which means to expand, to spread abroad, or to stretch out. The same word is used in Genesis 1:6,7,8, 14, 15, 17 and 20, as well as Psalm 19:1. This is significant because it is a clear indication that the Bible tells us that contrary to what some of the most brilliant minds of the 20th century believed, the universe had a beginning and that it was expanded by God. So, in a very real scientific sense, the scientific prediction made in Genesis as well as other verses were confirmed by direct observation.

But that’s not the end of the story. The Bible not only tells us that God expanded the creation on Day 2 but that He is continually expanding it. There are 17 verses that state this unequivocally. Here’s a few of them:

Isa. 40:22 states: “It is He (God) who sits above the circle (round) of the earth, and its inhabitants are like grasshoppers, Who stretches out the heavens (the cosmos) like a curtain.”

Zech. 12:1: “…Thus says the Lord, who stretches out the heavens, lays the foundations of the earth, and forms the spirit of man within him.”

Psalm 104:2: “Who cover Yourself (God) with light as with a garment, Who stretches out the heavens like a curtain.”

Day two of the creation account also tells us that God separated the water by placing an expanse between them, creating layers. (FYI: for more information regarding the “waters”, refer to my writing entitled “Ex Nilo.”) The modern science of meteorology confirms that our atmosphere contains several layers, which they labeled: the troposphere, stratosphere, mesosphere, ionosphere, and thermosphere. Once again, we have observable evidence of scientific predictions made in the biblical account.

Of course, if the biblical account of Genesis is true, there should be much more supporting evidence. There is. However, it has been hijacked by experts in spin but demands mention. Another good example is the genome project, that supports the biblical claim that animals only reproduce after their own kind. When God created the animal kingdom, He created a mechanism that maintained the integrity of this kingdom. Today we call it genetics and refer to the mechanism as codes. There is also much evidence regarding Noah’s flood that has been manipulated by evolutionary geologists to support long ages but actually renders evidence of layers that can only be laid down catastrophically with water. (You can research the Flume Experiment for verification.)

In conclusion I would like to say that I hope this series has spurred you on to research what you may be questioning about origins that may be creating a crisis of faith for you. If you take the time and do so, you may be pleasantly surprised to learn that God does not lie. He is who He says He is and that His word can be trusted after all.

Related Topics:astronomybiblecreationevidenceevolutionscientific theory
Up Next

Police: armed to protect you?