Has the United States Supreme Court turned completely into a rogue court? Do they now break their own rules, and hold themselves above the law? If they have done what a certain law office now says they have done, then yes.

Why won’t Ginsburg and Kagan get off the case?

At issue: whether Justices Ruth Bader Ginsburg and Elena Kagan should have heard, and written opinions on, the same-sex “marriage” case. At the time of posting, the country still awaits the Court’s ruling on that matter. But the taint of corruption and rogue behavior might irreparably harm any respect the country might have for the Court’s ruling. Especially if, as more people now fear, the Court rules that no civil or religious authority may object to two same-sex roommates sharing bed, calling themselves “married” in the eyes of the law, or even compelling the first cleric they ask to “solemnize” the “transaction.” 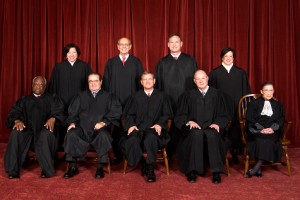 Both these Justices have said publicly they want the Court to vote to change marriage forever. Both have “solemnized” such “weddings.” Elena Kagan openly declares she prefers to share bed with a woman instead of a man.

Knowing this, the Foundation for Moral Law moved formally for both Justices to recuse themselves from the now-pending cases. Bob Unruh at WND has the details. He bases his report on another report from the firm of William J. Olson, P.C. They filed one motion on April 27 of this year. They filed a second on May 21, after Justice Ginsburg “solemnized” another same-sex “wedding.” The problem: the Court failed to rule on either motion, and still has not ruled.

These points … suggest that the high court, for an inordinate time, has ignored the recusal motion. While the court has finally acknowledged that some recusal filing was made, it certainly gives no assurance that any ruling on the motion will be forthcoming before the court decides the same-sex marriage case.

By law, any judge or Justice, at any level, must get off any case when any party to it might suspect said judge or Justice cannot rule on it fairly. But at the Supreme Court level, the Justice involved, and only that Justice, need decide on any question of qualification or disqualification. Ginsburg and Kagan should each have said something publicly about staying on the case after the motion went in to the court. The motion went in on April 27. The Court heard oral arguments on April 28.

If those two Justices had complete confidence of doing nothing wrong, they could and should have said something publicly on April 28. They did not. Furthermore, they managed to “lose” the first motion. Now the second motion, or “request,” or whatever the Court deigns to call it, comes in three weeks later. And the Court does nothing about it.

This shows the Court has gone rogue. They know at least two of their number are breaking the law. (Not only that, but Chief Justice Roy Moore of the Alabama Supreme Court says the U.S. House should impeach Ginsburg for advocating on a pending case.) And they are covering up. What protection has any litigant against rogue judges?

Where is Chief Justice John Roberts in this? Laying low on account of adopting two children under questionable circumstances, maybe? (That case first came to light ten years ago, in fact.)

Eight days ago, some fifty prominent religious and political leaders signed this open letter to the Supreme Court. It has a plain message:

We ask you not to force us to choose between the state and the laws of God.

Oddly enough, this has the proponents of the same-sex-roommates-sharing-bed cause crying “Foul!” all around. From The Daily Kos to the Center for American Progress, they deny that any ruling will force clerics to “solemnize” such “unions.” Of course, Solicitor General Donald Varilli said the exact opposite at oral argument. More to the point, a rogue Court can decide anything. Thomas Jefferson warned people, after McCullough v. Maryland, the Court made the Constitution “a mere thing of wax” in its hands. Now the Court has gotten brazen about it.

But of course, some people think those who raise such obvious questions, display bad manners. Perhaps decrying a Court that breaks its own rules, also shows bad manners. So the Left has always behaved: the ends justify the means. Rogue court, rogue government. What does it matter to such people, so long as they get what they want?

Counterpoint to evolution: the Big Bang

What incredible nonsense. Or do you really a justice who has private medical insurance be barred from hearing the ObamaCare case?

Terry A. Hurlbut
Author
Reply to  James B

If, as you seem to say, there’s nothing wrong with a Justice out there publicly advocating for the outcome of a case she’s writing opinions on, then why bother to hide the motion? Why not make a simple statement – “motion denied” – and move on? No, the Court are hiding this because they are ashamed of it.

Gone rogue is rather vague and tame in my opinion. The high court has gone organized criminal enterprise.

Dark Day for Marriage in America | Conservative News and Views

[…] of the Supreme Court Justices refused to recuse themselves even after they openly displayed their biases and preferences before the decision was handed down. […]

[…] to disqualify themselves, and the Court not only refused to consider the motion but even managed to lose it in their paperwork […]