Yesterday the incredible happened. The Obama administration prepared a real Trojan Horse law. Call it “Obamatrade,” the common name for the Trans-Pacific Partnership. For years he negotiated this, in total secrecy. The compliant media distracted the public with willing sideshow freaks like Bruce Jenner. And in the House of Representatives, Obama’s accomplices in the Republican caucus put in a rule to vote separately on its two key provisions, so that those who wanted each could pass each without voting on the other. Recall the Congress passed the Compromise of 1850 the same way. Only this time, the tactic failed. The Trade Adjustment Assistance part of Obamatrade failed, by a vote of 302-126 against. Because Obamatrade as a whole passed the Senate, the separate vote to pass Trade Promotion Authority meant nothing.

Barack Obama pressed harder than ever to win passage of his Trans-Pacific Partnership bill in the House. (The New York Times, Fox News Channel, Freedom Outpost, Bob Livingston’s Personal Liberty, The Wall Street Journal, and WND have details on yesterday’s vote. WND reports this morning on efforts to bring it back.) Obama went to Capitol Hill to plead for votes. Representative (and Democratic Floor Leader) Nancy Pelosi (D-Calif.) stood by his side. 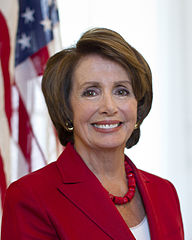 But minutes before the vote came on Trade Adjustment Assistance, Pelosi made a mutiny. She specifically said she would “slow down the fast track.” She said she wanted “a better deal for American workers.” Most Democrats sided with her. Most of the Republican caucus also voted against the TAA package. They see it as another social-welfare program.

But Senators Jeff Sessions (R-Ala.) and Mike Lee (R-Utah) find other faults with Obamatrade. The key, to them: Obamatrade gives yet another example of Congress wrongly vesting its own authority in the President alone. The Constitution simply does not allow this.

[The President] shall have Power, by and with the Advice and Consent of the Senate, to make Treaties, provided two thirds of the Senators present concur.

Obamatrade, or any “free trade agreement,” qualifies as a treaty. Only a treaty can supersede U.S. law or the law of any State.

Senator Sessions told WND in detail why he does not want the House to pass “trade promotion authority”:

It will empower the president to form a Pacific Union encompassing 40 percent of the world’s economy and 12 nations – each with one equal vote.

Why Obamatrade and anything like it breach the Constitution

More Republicans see the flaws in free-trade agreements today, than ever saw them when the two Bushes worked on them. They probably see these faults because  (Bill Clinton accepted almost the same North American Free Trade Agreement Bush Senior worked out with Canada and Mexico.) Joseph R. Mercola, D.O., described other faults, both practical and constitutional, in two reports.

First, any trade agreement, including Obamatrade, affects tariffs. Tariffs qualify as duties under the Constitution. See Article I, Sections 7(1) and 8(1). First, Congress has the power to lay and collect tariffs. Second, tariffs raise revenue. The House should have passed a tariff bill first. Under Section 7,

All bills for raising revenue, shall originate in the House of Representatives.

Second, and more to the point: free-trade agreements today affect the laws of the countries that sign them. Every country passes different laws governing what sorts of products its citizens or subjects may import or use. Ideally, Congress and the State legislatures should pass such detailed laws and let the courts judge people on them. Today, of course, quasi-legislative and quasi-judicial executive agencies both make laws (called “regulations”) and judge people who allegedly break them. One can judge the folly of that practice in another context. (But in this context, many Republicans object to Obamatrade after Obama ordered his executive agencies, especially the Environmental Protection Agency, to make a body of law for which they never would have voted.)

The problem: a free-trade agreement supersedes such laws, or regulations, or whatever one wishes to call them. As Mercola describes, they do this in the name of “regulatory harmony.” That is, a person or business set up in one country need only apply to his own country’s government for permission to do a thing. If he can win approval from his own government, then at least he should find gaining approval from other parties to the agreement easier to get. (Eventually, though, Obamatrade or something similar might set up regulatory bodies that could override and dictate to federal regulators, and by extension the Congress.)

If that does not qualify as a treaty, what would? So: by what authority does Obama, or any person holding office as President, ask Congress to grant him authority to negotiate a treaty needing only a majority vote in the Senate and a single, no-debate vote in the House?

Who benefits, indeed? And why, in the lead-up to yesterday’s vote, did anyone seeking even to look at the bill need to sign a non-disclosure agreement? Excuse me? These are representatives of the people. Who classified a trade agreement on the level with wartime military secrets?

In fact, large companies, typically having offices in more than one country, benefit the most from such agreements. As large as they are, they often set the terms of such agreements, at least indirectly. No one else can. No one else has their resources.

These companies do not do this in the name of individual freedom. They do this for rent-seeking: trying to force people to buy their products, instead of buying from other, usually local competitors. They use such high-minded words as freedom to sell to anyone willing to buy. But in the law courts of the signing powers, they construe any use of government-owned infrastructure to help a local seller as unlawful protection of that seller in preference to them. Mercola offers this example: a school district decides to buy fresh meat, bread, fruits, vegetables, and other foodstuffs directly from local farms. Suddenly that district is protecting local agriculture and impeding free trade! What will happen next? Will a State Department of Highways get into trouble for building special roads to help farmers bring their goods to market, like the famous Farmers’ Market roads of Texas?

Advocates of true freedom could get around that, with difficulty. Private schools and private road builder-owner-operators could do as they please to support local farmers. Or could they? Mightn’t those same large companies that set the terms of these trade agreements, then oppose any measure to turn roads or schools over to private operators to remove any liability for “protection”?

For these reasons, the Senate should jealously guard its authority, under the Constitution, to ratify treaties. For those same reasons, a treaty should have the votes of two-thirds of the Senate. Surely the Senate should never sign away something as fundamental as where a local school district buys its food by a simple majority vote.

Obamatrade might be dead now. The Trade Adjustment Assistance part of it does not have good prospects. If the House changes it in any way, Obamatrade must go to a House-Senate conference committee. That will give advocates of the Constitution another chance to reassert the Senate’s prerogative to judge this or any other treaty.

Another action for which Obama should be impeached and congress will still sit on their hands and do nothing.