“The end of the law is not to abolish or restrain, but to preserve and enlarge freedom. For in all the states of created beings capable of law, where there is no law, there is no freedom.” –John Locke

I remember being interviewed by an individual on his radio show who wanted to do his best to pull me out with a series of “gotcha” questions in an attempt to publicly humiliate me. As we were talking about the Mosaic institution, Common Law and the Christian religion in contrast to other religions in America (Judges 5:8), this radio show host was attempting to convey to his listeners that anyone has the right to do whatever they want to do, regardless of what the law is.

Does law rule, or opinion?

This radio show host was inadvertently being used to overthrow law by establishing opinion in its place (Hosea 4:6).

He went on to ask me what my opinion was on a certain topic. My reply was, “We are not ruled by opinion in this country, we are ruled by law.” He was confounded. I went on to say that we used to be rooted in the same principles and we could have differing opinions as to how they were to be applied according to the law.

Last week, in Jenison, Michigan, while speaking at an event where my ministry came under heavy attack by the state controlled media, we have now come to learn that the radical sodomite, who stirred all of this up with the use of paid protesters, was responsible for misappropriation of church names to support the sodomite lifestyle. This was all done by attempting to use me as their reason for protest.

I heard this about Bradlee Dean

This sodomite was threatening churches either to preach your message the way that he demand them to do or else (Romans 1:24). We have also come to learn that it did not fare well with the local churches that were threatened (Matthew 16:18). 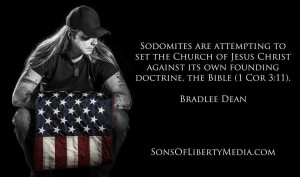 Take a look at our legal demand against this particular sodomite by clicking here.

Where is this sodomite getting his information from in order to be so emboldened to actually attack, demonize and polarize them that stand against his abominable lifestyle? He even went so far as to attempt to set the Church of Jesus Christ against its own founding doctrine, the Bible (1 Corinthians 3:11).

Practice and history of the SPLC

You need go no further than The Southern Poverty Law Center.

To know who is encouraging this sodomite, one must understand the teacher and, in this case, it is none other than SPLC’s founder Morris Dees. Dees did legal work for the KKK (an arm of the Democratic Party) in 1961 defending the KKK for their crimes against black Americans.

As was he was one of the speakers at the 50th anniversary of Selma-to-Montgomery.

This is all coming from an organization that uses a façade of legitimacy (a law firm that advocates un-law). Of course, they do this with misuse of language and subtly changing definitions of widely understood and accepted terms.

As you know, the socialist-communist agenda has always had a problem with how to defend and promote an indefensible agenda, dedicating themselves by covertly undermining and ultimately destroying American society by implementing socialism/communism.

An SPLC tirade nearly killed someone

During an FBI interrogation, Corkins stated that he intended to “kill as many as possible and smear the Chick-fil-A sandwiches in victims’ faces.”
Prosecutors said that Corkins planned to leave FRC after the attack and go to another conservative group to continue the reign of terror. A handwritten list of three other groups was found with Corkins’ belongings. An investigation of Corkins’ computer found that he identified his targets on the Southern Poverty Law Center’s website.

Even after the shooting at the FRC, the SPLC went so far as to put an article on the front page of their website in an attempt to heighten the FRC’s label as a hate group.

Remember what Mark Potok, the director of intelligence for the SPLC, stated?

“Sometimes the press will describe us as monitoring hate crimes and so on…I want to say plainly that our aim in life is to destroy these groups, to completely destroy them.”

Hopefully, the American people can now understand where this sodomite gets his information. Apparently, he thinks that he has freedom to violate the law. He does not, and we will see to it that he, as well as the SPLC, understands that we are ruled by law and not lawlessness.

Marriage is no more

The SPLC is a communist front group whose stock in trade is deviousness. Many of those they label as conservative are really racist left wingers.