The Chautauqua Institution, deemed an adult education center, is less education than it is indoctrination to the world of The Left. In the month of July, in an idyllic setting, the Institution invited Islamists who speak of “Love and Justice in a World of Suffering,” hiding the truths about the suffering caused by Islam – both the harsh Sharia law already in effect for its adherents and to establish it in Dar Al-Harb (House of War), the countries not yet under Sharia – until the entire world will writhe under Islamic oppression.

Managing the news about Islam

Omid Safi, appointed director of Duke University’s Islamic Studies Center  in July, 2015, spoke in terms to please the underinformed.  He and they would prefer that hideous acts of violence, such as perpetrated by ISIS, ISIL, Boko Haram, Hamas, and countless others with like purpose, be removed from the news media and replaced with stories of compassion.  In so doing, of course, he would silence the reporters and critics and destroy our freedom to speak, report, and inform the masses about the evils perpetrated by Muslims, so that we would remain oblivious to Islam’s stealth control over our media and our minds. He would then pursue and obtain legal accommodations without obstacle, force Sharia law over our Constitutional laws without hindrance, and threaten all our freedoms through influence, treachery, and force. 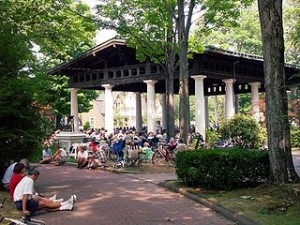 The Hall of Philosophy at the Chautauqua Institution, Chautauqua, New York

The “pain and suffering” he referenced in Ferguson, Baltimore, and Staten Island, have been shown to be largely incitement encouraged by outsiders who represent Islam and the Left; conquest is best accomplished during turmoil and disorder. The mayhem forces the unprepared, unarmed victims into appeasement mode, to cede their rights and ability to speak and defend in favor of assuaging the unmanageable horde that cries “victimhood.”  Peace at any cost.  The chaos allows the aggressive to dominate and, under the guise of “love and justice,” impose its law on all nations – thus implementing the laws of Allah through jihad.

Safi was also sure to remind that there was insufficient money for social issues but a glut for our military – an absolute inverted fabrication to which the unaware nod in assent because Chautauqua provides no discussions, no debates, no visitors to provide an opposing view. The rhetoric that passes for intellect remains unchallenged; the audience is never encouraged to analyze and grasp that the narrative undermines their very survival.

In fact, the growth in national health spending and welfare programs have accelerated to levels that, unchecked, will bring our country to bankruptcy. The federal government’s Centers for Medicare and Medicaid Services have expanded to cover additional and improved services for 200 million people; and an average of 46+ million people received food stamps on the Supplemental Nutrition Assistance Program during 2012, with more illegal aliens and “new Americans” still coming to our shores – unvetted for physical and mental illnesses, crime, or productivity. The programs thwart incentive to strive, inhibit growth and achievements, and cut back funds for investments, new jobs and opportunities for the many – a future of prosperity.

He advocates cuts to our military budget, already at a pre-World War II low, when the threat to our national security is at an all-time high. Severe cuts in defense spending have already subjected our nation to accumulating strategic risks to such as crisis-readiness, sustaining pilot skills with sufficient flying hours, and maintaining a Naval presence in key regions.  Our military must continue diplomatic, economic and intelligence elements for preserving trade routes and stability in vital regions, and serving global interests. Financial support is crucial for military infrastructure and civilian and contractor defense workforce.  Safi instigates his audience to desire further increases in social expenditures (higher taxation and prices, shrinking wealth, increased poverty, and compounded national debt) and to diminish our self-defense and military superiority against Islamic or any tyrannical expansionism. Disarmed, submissive subjects are easier to rule and more likely to provide the revenue and manpower needed for further conquest.

Safi reminded his audience of the human condition, always to plead for Muslim suffering, as though they are the eternal victim rather than the perpetual offender.  As I mentioned in my previous essay, Mosquitoes in the Mosque,  Islam is guilty of jihadi expansionism and the slaughter of hundreds of millions of victims since its inception in 624 A.D., unparalleled by any other people, and ongoing.  The FBI has reported that ISIS exists in “every single state,” and Chautauqua has its numerous visitors from the Muslim Brotherhood, including the notorious Imam Rauf, who failed to develop his Cordoba Mosque on Ground Zero but is planning one for this vacation spot in southwestern New York state.

While Safi urged his audience to love and empathize with “the human condition everywhere,” he fails to address those who have fallen prey to Islam. An ardent champion for the end of a Jewish Israel, this corrupt jihadist has written fallacious articles that blamed Israel of atrocities against Arabs, using Holocaust-era photos of bodies from Buchenwald concentration camp!  Who invites these speakers to so misinform those who presumably come to learn?  How are they vetted and allowed these opportunities to propagandize against our liberties, our nation, and against Israel?

The Chautauqua Institution, originally designed to bring culture, hope, and promise during the Great Depression, now presents a façade of scholarship, intellect, and critical thinking, its attendees duped at a critical time in American history.  Alas, idealism does not protect one from ignorance, dogmatism, and foolishness.