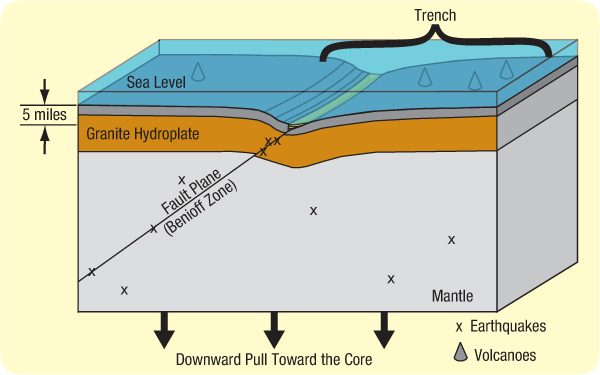 Glen J. Kuban, almost twenty years ago, took exception to the finding of human and dinosaur tracks, side by side, near the Paluxy River. He has tried several times in those almost twenty years to cast doubt on that claim. Six years ago he found a new target: Walter T. Brown, author of the Hydroplate Theory of the Global Flood. (See In the Beginning: Compelling Evidence for Creation and the Flood, in hardcover and online here.) He published a rebuttal to the theory, and last edited this two days ago (1 September 2015). But his revisions won’t help him. He might have read the book. But he never once examines critically the conventional theories of the origins and history of the earth. And so he falls into a common logical trap. And he never escapes it.

A twist on circular reasoning

Any student of formal logic soon learns about the fallacy of circular reasoning. If one starts by assuming a fact of nature, one cannot try to prove that fact later. Any scientist knows this. For that reason, scientists always start with fundamental properties of nature that none can explain. Geometers start by assuming certain relationships (like the constant ratio of the circumference to the diameter of all circles) they cannot prove, but still know. Some things deserve to have someone assume them. Hence their name:axioms, from the Greek word axios meaning something deserving or deserved.

In circular reasoning, someone tries to prove an axiom. Formal logic does not work that way. And origins scientists often fall into a twist on this trap: “Your theory does not work under my theory (or the theory everyone accepts). So your theory must not hold.” Glen Kuban falls into this trap.

Observe how Glen Kuban takes issue with Walt Brown’s starting point: a subcrustal ocean, some fifty miles underground, and sealed for about 1600 years (at least) until the crust breaks and lets it out.

This precludes any significant earthquakes, meteorite impacts, or fissures in the crust anywhere on entire earth, even though such phenomena are well evidenced throughout the geologic record.

The trap: Kuban assumes age for the earth, and gradual, sequential settling of layer on layer of rock and soil. But suppose one event laid down all those layers in one year? And suppose the meteoroids that fell back as meteors (and meteorites) came from that same event?

The Hydroplate Theory also tells us that every earthquake in the historical record is an aftershock of the earthquakes that attended the breakout of the subcrustal ocean. Of course no earthquakes occurred before the Global Flood. The Flood event provoked the first such earthquakes! These made the Japan Earthquake feel like somebody dropping a bowling ball in the lane next to you. They easily reached Richter magnitudes of ten to twelve. That made them more than powerful enough, by the way, to produce the radioactive materials Glen Kuban’s sources rely on to “date” the earth.

Kuban does give a nod to Brown’s theory of the Creation Week itself. Here Brown scrupulously follows the Bible. Specifically he follows Genesis chapter 1 and 2 Peter 3:5. (He follows the original Greek verse. That verse speaks of the earth “standing together out of the water.”) Kuban thinks he found a weakness in Brown’s theory: whether the earth’s crust, if hot enough to deform, could have cooled off rapidly enough to avoid killing the life God placed on the earth later. The way Kuban expresses himself, makes one suspect he thought the life came before the buckling of the crust, the sealing of the waters under the earth, and the forming of the pillars. Of course, the Bible says different.

Walt Brown might seem to break one of his own rules, if only this once. “Brown’s Razor” says one must not invoke miracles to which the Bible does not specifically attest. But the Bible does attest to Creation Week and the events of it. The first matter formed in space, literally out of nothing. That alone qualifies as miracle enough. After that, life itself could only come by miraculous means. (Neither Glen Kuban nor anyone else has ever advanced a convincing model for abiogenesis or chemical evolution. Life does not come from non-life.) The exquisite sequence of the molding of the earth’s crust surely qualifies also.

How the Global Flood started

Glen Kuban seems to say Brown specifically said that God set the Flood off by direct Divine action. Brown never says that. He says the Flood was an accident waiting to happen after Man “fell” and turned his back on God. The Bible repeatedly says “all creation groans” under the effect of sin.

Furthermore, for all we do or can know, some person or company or corps of engineers set off a charge of high explosive (not nuclear or thermonuclear) in the wrong place, and opened a crack that compromised one of the pillars. Whoever did this, neither Adam nor Noah nor his sons ever recorded his name or the details of his act. The Flood did not begin with a miracle. But the Bible does attest to one: God gave Noah 120 years’ advance warning. He also gave Noah the design for a vessel that would withstand a rather violent launch and even more violent buffeting. (The favorable winds that blew the great life-ship into the “eddy cut off from the main flow” where it “rested” until the waters went down, likely came from the rise of the great mountain chains as the hydroplates settled to the floor of the old subcrustal chamber and literally wrinkled.)

Glen Kuban talks at length about The Heat Problem. Brown himself calculates the energy release from the breakout at more than a trillion thermonuclear bombs. But when one releases a supercritical fluid from confinement, one relieves at once the “critical pressure” that kept it in that state. (Supercritical fluids consist of mutually miscible liquid and vapor.) The fluid expands, then cools. Rapidly. Refrigerators work that way.

Last, and possibly most important: the energy that converts to the kinetic energy of the comets, asteroids, meteoroids, and trans-Neptunian objects (including Pluto), cannot remain as heat.

The weight of the Mavericks

Glen Kuban cites Gerard Jellison’s calculation that the total masses of the Mavericks of the Solar System amount to 100 times the mass of the earth. Jellison went off by three orders of magnitude. The total masses of the comets, asteroids, meteoroids, and trans-Neptunian objects amounts to not more than four percent of the earth’s mass today. Surely Jellison knows this.

If Sharp (another of Kuban’s sources) can back-calculate the motions of the asteroids, then he deserves a Nobel Prize. (That might not be saying much, considering the very poor quality of some recent Nobel laureates; consider Barack Hussein Obama.) Any such back-calculation fails to account for loss of mass in out-gassing on whatever side of any object faced the Sun at the time. (Not to mention that said out-gassing sets a severe limit on the ages of these objects.) 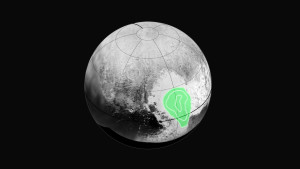 And does Sharp know that the twelve largest TNO’s have nearly identical arguments of perihelion. To paraphrase Ian Fleming: once is happenstance, twice is coincidence, and three or more instances set a pattern. Any theory of the origin of TNO’s must account for that pattern.

Can Sharp explain, for that matter, the lake of frozen carbon monoxide in the western lobe of the Tombaugh Heart Shape on the dwarf planet Pluto? How does he propose carbon monoxide in such quantity formed in space? Brown proposes that Pluto accreted from Flood ejecta. That Flood ejecta included uprooted trees and shrubs–a lot of them. The heat of accretion, in the presence of oxygen from photolyzed water vapor, started a fire. Start a fire in a confined space, and you get carbon monoxide, in preference to carbon dioxide. This gas broke through to the surface, condensed, rained on the Tombaugh Plains, then froze.

What happened to the Moon? 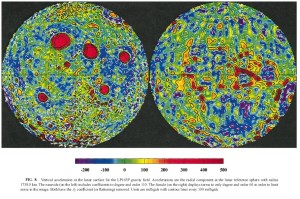 Glen Kuban makes another mistake about what the Hydroplate Theory predicts about the Moon. Seven tremendous impactors fell to the Moon and produced lava flows. The impactors stayed in the Moon as the “mascons” the Apollo astronauts discovered. The lava flows cooled to form the great Maria (Oceanus Procellarum, Mare Tranquillitatis, Mare Imbrium, etc.). Those impacts need not have happened immediately after the Flood. In fact they probably did not. Those seven impactors probably began as fragments of a companion asteroid, at least as large as Asteroid 3753 Cruithne and probably larger, with an orbit in the plane of the ecliptic. That asteroid passed too close to Earth, calved, and rained down its pieces on the Moon. Two or three of them, at the same time, struck the earth, and kicked up enough dust to foul up the rain patters at the sources of the Blue and White Nile Rivers. Fouled them up for seven years. The seven years of the Biblical Famine.

And the proof? The Maria contain craters that somehow filled in. Perhaps, in the days after the Flood started, Flood ejecta bombarded the Moon evenly. In those days the Moon had a “solar day” a lot shorter than the present synodic month. The tidal lock did not occur until after the Seven Impactors buried themselves in the Moon. They created an uneven distribution of mass.

The starlight and time problem

Brown does try to make his work comprehensive. So sometimes he treats subjects that bear less on the Flood and more on how the earth can be young while the universe is so vast (13.7 billion light years in radium), yet we can see every object in it. Glen Kuban thinks he has done his job by pointing to the weaknesses in Brown’s specific sources on that point. But he never once considered another source (John Hartnett, Starlight, Time and the New Physics). Hartnett explains the seemingly inexplicable this way: when you stretch space, you stretch time. Hartnett can concede that 13.7 billion years’ worth of changes have taken place–at the edge of the universe. At the center of the universe, only seven thousand years need have passed. (And Glen Kuban fails to show, with his brief citations, that redshift is not quantized.)

What case does Glen Kuban make?

In the rest of his essay, Glen Kuban reveals no new insight. He cites, and repeats, the same tired, hackneyed arguments uniformitarian scientists have advanced for over a hundred fifty years. Repetition does not validate an argument.

At least he puts his name to his work. But why will he not approach Brown and accept Brown’s Written or Recorded Teleconference Debate Challenge? He thinks Brown indulges in a flight of fancy. Why, then, will he not go into the exacting detail a debate would force? If he seriously thinks he can challenge Brown, let him accept a challenge Brown has already made.

The Torah and medicine