Then Moses stood in the gate of the camp, and said, Who is on the LORD’S side? Let him come unto me.” Exodus 32:26

This last week, the Minneapolis Star and Tribune (called The Red Star by locals) posted a picture of a group of people claiming to be affiliated with Black Lives Matter. In reality, they were promoting an event that no one would show up too.

It was reported that Black Lives Matter “plans a march along Snelling Avenue and rally outside the fair beginning at 11 a.m. to raise awareness about issues that plague black communities.” Of course, there had to be a text set with a picture of all 50 people gathered together to protest.

It has been stated, “You take the pictures and I will create the war.” Day after day, the media is doing everything in its power to divide and conquer by using this methodology in hopes of inciting a tangible response to their lies (Matthew 12:22-28).

The problem with this piece is that I was personally at the Minnesota State Fair for 12 hours the same day that the media reported these lies! It simply never happened.

These people mean to incite a war, and the first casualty of that war is the truth. So, let’s get to the truth and expose those who are inciting the war.

People need to get past skin color based agenda’s and realize that we are in this together and are “One nation under God.”

And hath made of one blood all nations of men for to dwell on all the face of the earth…. Acts 17:26

Yet, I feel inclined at this point to ask the question, whose side are the people on when they make statements like “Black lives matter”? What of the lives of those who are not black, do they matter? Of course, they do.

I am so tired of those who attempt to race bait by using skin color for their argument to bring about division.

An “injustice done anywhere is a threat to justice everywhere.” This statement includes all people, regardless of skin color.

Justice must be administered where the law has been violated, regardless of one’s skin color. According to Webster’s 1828 Dictionary, justice is merited punishment for violation of the law.

But whose law are we talking about? Look above the heads of the Supreme Court justices in my home state of Minnesota – who is it that you see above them? None other than Moses, awaiting the Divine Law, the Ten Commandments (Deuteronomy 5:4-21; Exodus 20:1-17).

The righteous people that call for justice and take a stand against a man who shoots down a cop in the middle of the day are not racist because the murderer happens to be black. People in this country would have responded the same way if it had been a white man.

Americans are not racist for calling out illegal Mexicans for violating the law. The illegals are breaking the law by coming into America illegally and that makes them criminals. The law defines their crime (Romans 3:20).

When a woman (white, black, Hispanic, etc.) kills an innocent baby in her womb and then cries “war on woman” this does not exempt her from justice, regardless of the corrupt in government that attempt to sanction murder (Proverbs 6:17). No, we are ruled by law, not by corrupt officials.

“Shall the throne of iniquity have fellowship with thee, which frameth mischief by a law?” Psalm 94:20 No, it will not!

For we know that the corrupt (This includes the people that allow them to commit the crime) have turned “judgment to wormwood, and leave off righteousness to the ground” (Amos 5:7). I say truth crushed to the earth will rise again, like a lion let loose to defend itself – defend itself, it will. 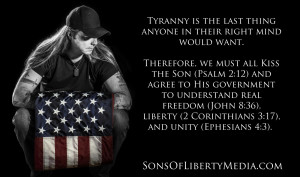 When a sodomite confronts a county clerk for not handing out state licenses in violation of Gods Moral law and calls it bigotry, homophobia or hate, we, as Americans, need to realize that they are willfully ignorant or just plain wicked. And the wicked are those who know the truth, but choose not to obey the truth.

And their iniquity (lawlessness) is found to be hateful. Psalm 36:2

Those who have not wickedly departed from their God (Psalm 18:21) must deal with the wicked in righteousness, and that in accordance with written law and obedience to God.

As you exit the chambers of the Minnesota Supreme Court, which I mentioned above, a sign reminds you, “Where the law ends, tyranny begins.” Tyranny is the last thing anyone in their right mind would want. Therefore, we must all Kiss the Son (Psalm 2:12) and agree to His government to understand real freedom (John 8:36), liberty (2 Corinthians 3:17), and unity (Ephesians 4:3).

Friends, we are given the choice between war and honor. If we choose to dishonor God and His moral Law, we can be assured that we will have war. So whose side are you on? (Exodus 32:26)

If you fail to recognize the problem at hand, then know that the tyrant your forefathers warned you about will rule the day and all will be lost. We are all in this together. But I ask, whose side are you on?