In response to the Iranian threat “Death to America,” Congresswoman Bachmann declared:

We take this threat seriously. When will Obama stop defending Islam long enough to defend the country?!?

Also noteworthy, Brenda J. Elliott, an award-winning historian, and Aaron Klein, investigative journalist, have co-authored a scholarly bookImpeachable Offenses: The Case for Removing Barack Obama from Office. And there many other scholars who agree with this assessment

However, since Iran has virtually declared war on the United States, and since it is on the verge of becoming a nuclear power, and further, since the nominal president has concluded a nuclear agreement with Iran that further endangers the United states, impeachment would be a slow as well as a politically precarious matter. 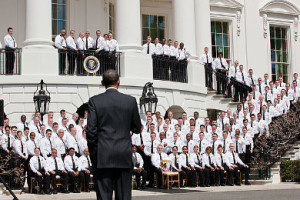 Obama addresses the uniformed division of the Secret Service in front of the South Portico of the White House. Photo courtesy Pete Souza/The White House

Nevertheless, now that several members of Congress, cognizant of Obama’s incompetence as a wartime president, would like to see Obama resign, but recognizing the delicacy of pressing America’s first black president to retire from office, a biracial public movement should be organized to facilitate his departure. Let’s face it: America under Obama has become a laughing-stock. Even Arab states regard his presidency as a clear and present danger to regional and international security.

This is not a partisan matter. At stake is the future of the United States. Inverted racial prejudice should not maintain Obama in office.

Although Vice-President Biden often has his foot in his mouth, he would not be a “post-American” president like Mr. Obama, who has displayed nothing but contempt for America’s foundational documents, the Declaration of Independence, and the Federal Constitution.☼

Inform Obama he is all alone