It would be a strategic error of historic proportions for the United States to allow Iran to develop nuclear weapons. Indeed, the greatest error of the outgoing administration of President George W. Bush was to refrain from attacking Iran knowing, after the November 2008 American election, that he was going to be succeeded by Barack Obama. Perhaps this is why John Bolton, former US ambassador to the United Nations, urged Israel to initiate the attack in question.

Be that as it may, suppose Iran became a nuclear power. Having failed to attack Iran before it developed the bomb, we may reasonably infer that the US would not launch a preemptive strike once Iran proceeded to deploy nuclear tipped ballistic missiles.

Consider: In August 2009, Dr. Uzi Rubin, who has long been involved in Israeli military research and engineering programs, reported:

The Iranians have upgraded their ballistic missiles to become satellite launchers. The solid-propellant Sejil missile signifies a technological and strategic breakthrough. This missile already poses a threat to a number of European Union countries. Based on its demonstrated achievements in solid propulsion and staging, Iran will face no significant hurdle in up-scaling the Sejil into a compact, survivable intermediate-range ballistic missile. A range of 3,600 km. will be sufficient to put the EU [and eventually the US under threat].

Dr. Rubin pointed out that even in August 2009 the Sejii, with only “an actual range of about 2,500 km.… could reach Warsaw and, indeed, six European Union countries: Poland, Slovakia, Rumania, Hungary, Bulgaria, and Greece.” By now, we may assume that Iran’s latest missiles can reach the USA.

In any event, Dr. Rubin went on to warn that

The Tabriz launch area in Iran is as big as Azerbeijan, bigger than Israel and half of Jordan. It’s about 50,000 sq. km., full of mountains, valleys, and canyons. You can hide thousands of ballistic missiles there with a very high probability of survival. So the capability to make a survivable missile that can threaten Europe now exists in Iran.

Post-Christian Europe would almost certainly succumb to Iranian nuclear blackmail. (Indeed, Europe’s pro-Palestinian or anti-Israel orientation should be viewed in this light.) Even a partial loss of the European economy would cripple the American economy.

Now contrast the mentality of Americans even before their brains were Obamanized or lobotomized by a con-artist who can’t speak without a teleprompter: contrast, I say, America’s mentality with that of its global-minded enemy confusingly called “Islamism” or “political Islam” or “radical Islam” or some other abbreviated conception of Islam. 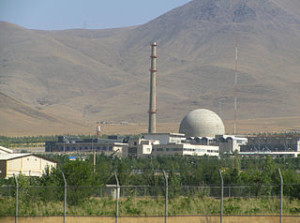 If it was true in August 2009, as mentioned above, that the Iranians had already upgraded their ballistic missiles to become satellite launchers of sufficient range to strike all of Europe, is it not obvious that they can deploy nuclear weapons of sufficient range—if deemed strategically necessary—to strike the United States?

Alas, there are “experts” in the US who advocate a “containment” policy vis-à-vis Iran comparable to that the Cold War vis-à-vis the USSR! Let me therefore quote a Soviet leader who scornfully told the Americans:

We will always be able to turn out more missiles than you. The reason is that our people are willing to sacrifice for these things, and yours are not. Our people don’t require a dozen colors of toilet paper in six different scents to be happy Americans now do; for that reason you will never be able to sustain public support for military expenditures.

Ronald Reagan proved him wrong, but a very different president now occupies the White House. And threatening America today are not Communists but Muslims who have used their own children as human bombs. Or as Michael Ledeen points out in Accomplice to Evil, he there refers to former Iranian President Mahmoud Ahmadinejad, who, during Iran’s war with Iraq, used Iranian children to walk over and explode enemy mine fields.

Unlike Nikita Khrushchev of yesterday’s “Evil Empire,” the Mullahs do not threaten America saying “We shall bury you.” No, listen carefully to the malediction of today’s Evil Empire. Ponder the difference between Khrushchev’s vicious threat and the satanic malediction of Sheik Hassan Nasrallah, Iran’s proxy in Lebanon, who spat in the faces of today’s liberal democrats, especially those in America: “We are going to win because you love life and we love death.”