Regardless of which presidential candidate you support, it is highly unlikely that any one of them will be able to turn back the pages of time to when America was a shining city on a hill. Many believe that our plummet from nobility is multi-faceted and cannot be laid squarely at any one person’s feet or attributed to any one cause. That opinion may not be accurate.

Our Founding Fathers created a form of government that would guide us through a myriad of challenges. They did not do so lightly. They researched. They argued. They debated and they agonized over every aspect of our Constitution, fully understanding the final draft’s attributes and loopholes.   For more than a century and a half, the system worked – even through the Civil War and the immoral challenges of slavery. The ability of the Constitution to be amended was significant and our humble Founders understood that significance. They also understood that this significant attribute could also lead to our national demise. Had they been prophets, they would have also foreseen the damage progressive thinking would have on our way of life and the liberties we hold so dear. Prophecy aside, they did understand that the survival of these United States was dependent on a moral and religious people. 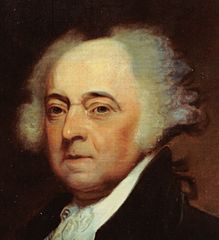 In October of 1798 in an address to General Walker, John Adams is quoted as saying: “…Our Constitution was made only for a moral and religious people. It is wholly inadequate to the government of any other.” Adams knew what he said and why he said it. It is unfortunate that only this segment of his speech is quoted. Its entirety speaks volumes to the primary cause responsible for our impending national doom.

Therefore, as we ponder how to “Make America Great Again,” perhaps we should be looking to the wisdom of one of our most passionate founders and not to any modern day political figure. Adams not only stated clearly that morality and religion were foundational principles of our Constitution, he also stated why. Below are segments of that speech that apply directly to us today.

…But should the people of America once become capable of that deep simulation towards one another, and towards foreign nations, which assumes the language of justice and moderation while it is practising (sic) iniquity and extravagance…in the most captivating manner the charming pictures of candor, frankness, and sincerity, while it is rioting in rapine and insolence, this country will be the most miserable habitation in the New World; because we have no government armed with power capable of contending with human passions unbridled by morality and religion. Avarice, ambition, revenge, or gallantry, would break the strongest cords of our Constitution as a whale goes through a net. Our Constitution was made only for a moral and religious people. It is wholly inadequate to the government of any other…

Adams may not have known Obama, our One World Order people, or our feckless representatives personally, but he certainly knew about the character traits they imbue. He understood that a government that sought to protect personal liberty could not do that if its citizens were not capable of governing themselves on a personal basis. No, Adams was not a prophet. However, his understanding of human nature and its effects on government can be considered prophetic.

As intuitive as Adams may have been, even he did not foresee a movement that would initialize a stronghold on the very notion of Providence and its God – a movement that would be A-religious and consequently A-moral. Arguably, Charles Darwin was as influential as Christ Himself on succeeding cultures and governments. Darwinism clearly gives license to those wishing to become their own gods, since the real God and His precepts and principles are removed from their belief system. The American Progressive/Regressive Movement is the best example of a philosophy based on Darwinism that is changing our country. And like its predecessor millennia ago in the Garden of Eden, these modern day Adams and Eves that embrace evolution believe they can create their own morality and consequently their own version of truth. It’s really the same old apple. In reality, their logic is not flawed. If God isn’t the creator, either He is a liar or He doesn’t exist. If the latter is true, then the progressive/regressives would be correct. Absolute truth would not exist, and therefore subjective truth reigns. They fail to realize that if truth is not absolute, it is not truth at all but merely opinion. In addition to just being plain wrong, the problem is that their subjective application has filled our prisons, destroyed our system of government, and perverted our children. It has perverted the very principle of freedom of religion into freedom from religion and in so doing has slowly been corrupting our moral foundation. As the Bible states: “If the foundations be destroyed, what can the righteous do?” Psalm 11:3.

Barack Obama, our present day progressive/regressive icon, was not the first narcissist to embrace racism. Hitler, Stalin and Mao beat him to the punch – all evolutionists that believed they could set their own standards based on their subjective truths. We know these names and the horrors they committed unbridled by absolute truth or righteousness that respects life; however, there were still others before them. All were charismatic and passionate speakers. These tyrants capitalized on a misinformed and misguided populace that had no standard to judge their rhetoric by. And there is no absolute standard except for the Word of God, which is systematically being removed from the public conscience under the guise of freedom of religion. Under these conditions, it should be no surprise that we, as a nation, have fallen with such force and such speed. Adams’ statement that our government was made for a moral and religious people should be echoing throughout our collective national soul. Banishing God has not led to a Utopian way of life. It never has and it never will. So whether our national demise is multi-faceted or not, its cause is singular: we are fast becoming a Godless nation – unfortunately proving Adams correct.

So while we debate which political party is better or which presidential candidate can restore America to greatness, the wise among us will be standing on their knees and waiving the banner of truth and truth’s one and only God. If America repents, and if America turns from legalizing immorality and justifying infanticide among other things, then and only then does America have a chance of restoring its greatness. And to be sure, greatness cannot be restored to us by any man except the man Jesus Christ. While Christ may not be running for the presidency, let’s once again elect Him as our one and only king, as they did at the time of the Revolutionary War. If you are so inclined, I encourage you to join with me in coining a new but old cry: No King but Jesus; No Sovereign but God. Simple words but they carry the greatest hope for a dying nation.

I’m not so certain that Madison, Adams, Jefferson, et al didn’t foresee present circumstances. They likely just recognized that little could be done to prevent it. They were men, not Angels

Some of the most moral people I’ve known in my life are not religious. Religious people tend to be very amoral.

How do you define moral? Hint: morality includes more than “no killing,” “no lying,” “no cheating,” and “no stealing.” It also means “no adultery.” Know what adultery is? Sure, you do, which is why I shall decline to define it on a site I’m trying to keep family-friendly. And how about “no coveting”? Leftist politics has its basis in mass covetousness. So don’t tell me “some of the most moral people you know are not religious.”

The difference is that religious people understand they are imperfect and seek to improve.