It is no secret to anyone who has paid even a little bit of attention to state and national politics that 95% of the media are left leaning ideologues who sincerely believe it is their duty to hold politicians, if Republican and conservative, accountable to the truth. It is quite certainly true that the press and every other part of the ruling establishment have their sights firmly zeroed in on a true enemy, one Mr. Donald Trump, and therefore are much too much involved in his demise to pay any attention to the one  we here in New Jersey call, Mr. Governor: Chris H. Christie.

In last week’s Republican Debate all was going swell for Christie until he was allowed to speak.  Almost to the word, every utterance from his ample assemblage was enmeshed in lies.  This might seem to some to be too harsh a statement. It is not. It’s right on the money. 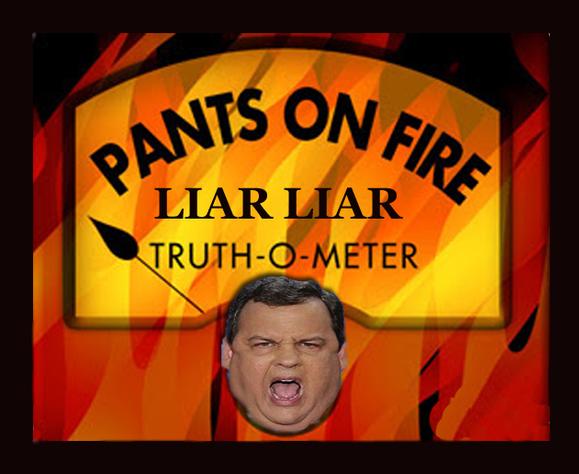 Not only have the media ignored these Christie fabrications but they have ignored a very strong and compelling Civil Rights Lawsuit  which is being battled in the Federal District Court in Trenton now for almost a year.  In that litigation Governor Christie is named as a defendant.

It might be reasonable to believe or think that this lawsuit, since it was filed by a private citizen, was not newsworthy nor important. And if the Defendants named in this case, which not only include Governor Christie, but legislators, police chiefs and even judges, in the beginning felt the same, they no longer do.

When every unscrupulous turn and every underhanded move and every unethical collusion between the District Court and the high powered defendants, were not only anticipated but prepared for by Nicholas E. Purpura, the pro se Petitioner in the Purpura v. Christie litigation,  the various defense teams as well as the Court, realized they truly had a battle on their hands.  This was made crystal clear by the several ruling dates being set, then canceled and reset, then canceled again as well as the State Defense Counsel Team demoting the original cast and bringing in the first string.

The lawsuit, if you are not familiar with it, charges that New Jersey citizens have had their civil rights denied in a “wheel of conspiracy” which falls under violations of Federal RICO Laws.  No other anti-gun control legal action has ever taken that tack.  It has proven to be quite a thorn in the side of the fiefdom of the ideological elite.

So how could this major legal activity go unnoticed by the news media?  How could it not have generated some excitement in newspapers or talk shows, when the main target of it is the hated Governor Christie?  The answer is simple.  As much as those scoundrels despise Christie, they despise the Second Amendment even more.

Back to that debate

Returning now to Christie’s performance in that debate. There he was telling the entire country that he supports the Second Amendment while he is in reality, ensconced in a Federal lawsuit which he is using tax payer’s dollars to defeat.  If Christie was a supporter of the Bill of Rights, he would cherish this lawsuit.  Instead of fighting it, he could call a press conference and announce that he will no longer side with the illegal lawmaking in New Jersey and plead no contest to the 7 claims of relief demanded by Purpura v. Christie.

If he is never asked about this or if he never has to even discuss it, he never will side with the Petitioner.  Why?  Because quite simply his defense of the citizen’s civil right to protect himself, is as thin and weak as his ability to tell the truth.

February 16, 2016 the District Court in Trenton is scheduled to make a ruling on Purpura V. Christie.  This latest date will come  almost a year after this suit was filed.  Wouldn’t it be nice if someone, at a debate or at a town hall event or a press conference would ask the Conservative Governor Christie this question?

“Governor, you have repeatedly said you are a supporter of the Second Amendment, if that is true, why are spending tax payer’s dollars fighting a legal action that would restore those rights?”

NOTE: If there is any doubt that Christie lied about his making it easier for New Jersey citizens to get a carry permit, please check out this video produced by NJ2AS.  This group has been doing great work in support of our Second Amendment rights.  Please join them in this cause.

Related Topics:judiciarymediapoliticianssecond amendment
Up Next

Rush, your establishment is showing