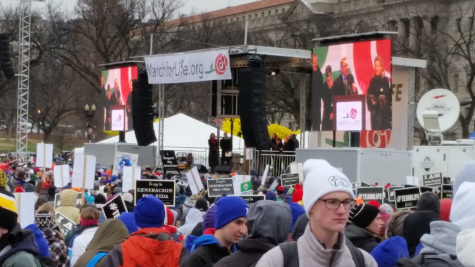 One word best describes what the Forty-third Annual March for Life showed America yesterday (January 22, 2016). The word: defiance. For those who organized and took part in this year’s March for Life, literally defied the elements. They also defied a nominal (alien) President, many leading Members of Congress and the Senate, and members of the Mainstream Media. They defied those who would call them demented or maniacal in this, the longest-running mass protest in the history of civilization.

The March for Life defies the elements… 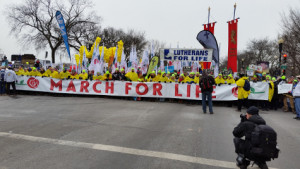 The March for Life organizers boldly hurled defiance yesterday in the face of “Winter Storm Jonas.” (Imagine naming a winter storm! But today that does not concern us.) “The March for Life will take place, no matter the weather!” And it did. This correspondent traveled to Washington, DC for the event, with New Jersey lawyer Andrew L. Schlafly and 27 others. Mr. Schlafly guessed that at least fifty thousand people milled about a stage north of the Washington Monument (15th Street and Constitution Avenue Northwest). Representative Christopher H. Smith (R-N.J.-4th), Republican Presidential Candidate Carly Fiorina, and several others spoke from that stage. Then, shortly after 1:00 p.m., the March for Life started up Constitution Avenue, turning on First Street Northeast toward the Supreme Court. At least a thousand people per minute flowed along the march route toward the end. Many joined the March en route, rather than start as far back as 15th Street. 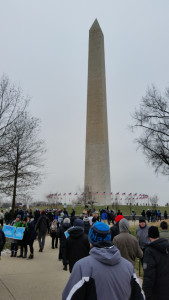 The Washington Monument overlooks the crowd at the 2016 March for Life rally. Photo: CNAV

Apart from unconfirmed, therefore unreliable, rumors, this much Mr. Schlafly and this correspondent observed directly: far less traffic than usual flowed along Interstate Highway 95 from New Jersey to Washington in the morning, and out of Washington in the afternoon. Much of that traffic, in addition to March for Life buses, consisted of electrical repair crews preparing to deal with trees that would fall and carry down power lines in the storm to come. Snow in fact began to fall in Chesterfield County, Virginia at 10:00 a.m. (per an eyewitness account) and in Washington itself at 1:00 p.m. as the March for Life prepared to start. Public schools in Washington did not even “take up” in the morning. The bus charter company warned the driver not to tarry in Washington, lest the storm stop the bus from leaving the city!

Despite all that, the March for Life took place. Its organizers refused to cancel it. Such was the importance they attached to the central issue. Fifty thousand murders take place every year. These murders do not show up on police blotters. The victims haven’t been born yet. But murder is still murder.

Who are these nay-sayers? Who routinely growl and gnash their teeth at those organizing, and taking part in, the March for Life every year?

A man holding office as President of the United States, actually describes a baby as punishment.

More to the point, Planned Parenthood sells baby parts. And encourages abortionists to cause even more pain to their victims, so they can save those parts intact. (Though today, to skirt the law about profiting from organ re-use, Planned Parenthood might now give those organs away free or “sell” them at cost.)

One cannot expect Barack Obama to appreciate the irony. Not, that is, if a British colonial subject truly sired him. (If Frank Marshall Davis sired him instead, that would make the irony richer.) Did anyone tell Barack Obama that Margaret Sanger founded Planned Parenthood to exterminate blacks as a race? How peculiarly does Barack Obama select his outrage toward whites as persons and as a race! Did anyone tell any liberal Democrat that Margaret Sanger further intended abortion to remove disabled people from the gene pool?

Those same people often ask us: judge the merits of an issue of protest by the fervor of the protesters. Argument from fervor is logically shaky. Nevertheless: these same liberals set that standard, for what it’s worth. But they do not apply it to the March for Life. Instead they prefer to insult those who take part in it. “Bigots!” “Anti-woman!” (Recall: half of all abortion victims are female. That proportion rises to near-one-hundred-percent in countries, like China, that place a premium on boys.)

Dare any of them, watching nearly a hundred thousand people march in the beginning of a blizzard, and in some cases drive back into that blizzard, call them “mean in spirit” or “crazy”? Maybe not. Aside from the One America News channel, far-reaching news organs never said a word about the March for Life. Not a word about the longest-running mass protest in world history.

What’s the matter, members of the Mainstream Media? Did those taking part in the March for Life embarrass you with their extraordinary fervor in a cause you despise?

[…] of Marches for Life, because your editor took part in four of them. (See here, here, here, and here.) Never at any time did March organizers even think of demonstrating in front of the homes of […]