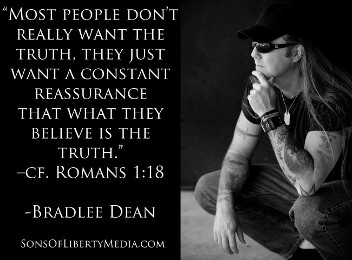 “Most people don’t really want the truth, they just want a constant reassurance that what they believe is the truth.” Paul of Tarsus said something similar (see Romans 1:18). The front page of the Minneapolis Star and Tribune this week (Propaganda outsource in Minnesota) read, “Orlando, the world weeps, FBI Looks for clues,” regarding this past weekend’s shooting that left 50 dead and a number of others injured.

Clue means “a piece of evidence or information used in the detection of a crime or solving of a mystery.”

Therefore, I want to be a good citizen and would like to help the FBI with clues in which they apparently have not found yet, regardless if they are right in front of their faces.

Outside of the facts that the shooter’s father was a presidential candidate in Afghanistan, hosted a pro-Taliban television show, as well as supports the Taliban, I think that the rest of the information should come without surprise regarding Omar Mateen, the Islamic jihadist who murdered at least 50 people on Sunday and wounded dozens more.

Mateen was a homosexual (this explains why the LGBT is blaming the Christian right) and regular patron to the Pulse nightclub. He was also known to the FBI.

FBI agent Ron Hopper said on Sunday afternoon that Mateen had a history with the agency. Agents first became aware of Mateen in 2013, after he made inflammatory statements to co-workers about affiliations with a terror group.

In 2014, Hopper said the FBI interviewed Mateen again because of a connection to a suicide bomber. But, he said, “contact was minimal” and Mateen was released.

Just before the shooting, Hopper said Mateen declared, in a 911 call, his allegiance “in general to the Islamic State.” How convenient?

Yet, the FBI is looking for clues.

Clues at Homeland Security itself

The Department of Homeland Security, did you say?

Here we have an individual that is an Islamic Cleric!

Salam al-Marayati, Obama Adviser and founder of the Muslim Public Affairs Council and is its current executive director

This shows a direct link to Obama himself and this guy is a “leader” of a group that does not like the United States Constitution nor its people! But let us show you just who this character is!

America, get a clue!

Day after day, week after week, month after month and year after year, the American people put their ears up to the speaker of either the radio or the television and are ready to hear what the President of the United States has to say. This is the same man who sets the tone for the kinds of violence that Mateen was involved in because he appoints these terrorists and then deflects responsibility from the guilty after the crimes are committed only blame innocent Americans by attempting to set the narrative Leviticus 26:17. Yet, after each atrocity, namely murder with a gun, the people hope to believe that what he says will be the truth, but the American people have yet to come to the realization that there is NO truth in this man or his administration. Furthermore, he is benefiting every group that means to harm Americans (John 8:44).

Without fail, there is a call for some form of disarmament or a stripping of the rights of not the lawbreaker, but the law abider, to make way for the criminals.

Another appointee, Homeland Security Secretary Jeh Johnson, who said that he was appointed to be the voice to the plight of the Muslims, now sees all Americans as the threat.

Dare we call it treason?

Those who have no mind of their own to think with, apparently are wondering how this mass murderer obtained guns legally, but the guns are not the problem. Islam is the problem. The real question is, why was he here in America in the first place?

Finally, those who are in the FBI who expect Americans to play the fool to their headlines and set narratives, you need not look any further to the White House, employ justice, and the crimes will be solved. Of course, America, you already knew that.

Family is tied in with him. If I understand correctly.

THE SHOOTER WAS A “RADICAL ISLAMIST” AND A REGISTERED DEMOCRAT, THAT SHOULD GIVE THE FBI TWO BIG CLUES, OF WHERE TO START LOOKING!

When one understand the methods Islam uses to advance itself all of the violence makes sense. Lies and deception to advance Islam are part of Islam. The add in the mix a fake President trying to undermine the country by putting in foreign agents into place of power the cause and effects are obvious. It is important to remember that Islam is a theocracy (a political system with a religious component). McCarthy was right and we have a problem now with foreign agents of Islam trying to take over the country.