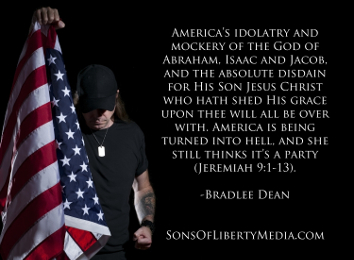 “If we mean to support the liberty and independence which has cost us so much blood and treasure to establish, we must drive far away the demon of party spirit and local reproach.” So said President George Washington. But today the 2016 election cycle has caught up most Americans once again. Americans should not settle for a handpicked option.

Donald Trump and Hillary Clinton are both immoral. Trump has had three wives. If he cannot keep faith with God, swearing to uphold his marriage oath, how can he keep faith with this country? How would he, or how could he, “faithfully execute” the laws of our Constitution to keep America free?

Clinton is a high profile repeat criminal. Yet both advocate that which God condemns (sodomy and abortion). Therefore both have de-legitimatized and disqualified themselves as candidates.

Furthermore they both claim to be Christians (1 John 2:4; Matthew 24:5). How does that Kool-Aid taste? Nothing could be further from the truth (2 Corinthians 11:15).

A selection, not an election

Furthermore, President Franklin Roosevelt warned you when he blurted out the truth in his confusion:

Presidents are selected, not elected.

Yet, Americans have seen this truth every single step of the way, over and over. But most do not take heed (Deuteronomy 6:12).

America, how long will you let these criminals control the game in which they have caught you up?

I remember when the Constitution Party candidate for the presidency of the United States in 2004 told me,

If you were to take Ronald Reagan and put him into a room, and Jesus Christ into another room, that room with Ronald would be packed with followers, whereas Jesus would be left alone.

How right on was his statement?

Look at the idolatry of the American people. They do not learn from history, throwing off God while submitting themselves to a corrupt man or woman (Jeremiah 17:5).

These candidates do their best to deceive, and to get the American people to forget about our Christian heritage. In fact, Barack Hussein Obama set this objective from the beginning of his corrupt administration. Remember that he promised to fundamentally transform America? How do you do that? Attack the foundations, which are our Christian heritage and the United Stated Constitution.

Yesterday the Democrats, today the Republicans

Let me take you back to the 2012 election cycle at the Democratic National Convention. Reports came that Republicans called out the Democrats for removing references to “God” from their party platform. While the Democrats refused God, the Republicans gave it over to their foreign and false gods (Deuteronomy 10:17).

Now, these anti-Americans need someone to tell them to put the American flag into the convention. The Communists and anti-Christs put themselves on full display today. ( 1 John 2:15-19)

Harmeet Dhilion opened the second night of the Republican Convention with a Sikh prayer by singing the invocation in Punjabi and then translating it into English.

Then we have Sajid Tarar, who delivered up an benediction at the Republican National Convention, praising the prophet Muhammad.

Earlier in the campaign season, a woman introduced Hillary Clinton and cited the words from the Pledge of Allegiance. But she purposefully ignored “under God.”

Apparently, these foreigners, as well as the Republicans, have forgotten that we are a Christian nation. They have forgotten why people left their native countries and came to America.

There is nothing I dread so much as a division of the Republic into two great parties, each arranged under its leader and converting measures in opposition to each other.

This all reminds me of when the transgressors of God’s Law (Exodus 20; 1 John 3:4) delivered up Christ to die on the Cross (John 8:46) at the hand of the religious hypocrites and the Herodians (Mark 8:15). These people asked the Roman Prefect to release a guilty criminal while delivering up an innocent man, namely the Son of God. They did this to try to justify themselves before one another. They did not realize they were bringing judgment upon themselves (Matthew 27:25).

And they cried out all at once, saying, Away with this man, and release unto us Barabbas:

(Who for a certain sedition made in the city, and for murder, was cast into prison…)

But they cried, saying, Crucify him, crucify him.

And there followed him a great company of people, and of women, which also bewailed and lamented him.

But Jesus turning unto them said, Daughters of Jerusalem, weep not for me, but weep for yourselves, and for your children.

For, behold, the days are coming, in which they shall say, Blessed are the barren, and the wombs that never bare, and the paps which never gave suck.

Then shall they begin to say to the mountains, Fall on us; and to the hills, Cover us.

For if they do these things in a green tree, what shall be done in the dry?

Will conquest come next?

So far as any persons are implied, we must think of our Lord as speaking of the representatives of Roman power. If Pilate could thus sentence to death One in whom he acknowledged he could find no fault, what might be expected from his successors when they had to deal with a people rebellious and in arms?

Soon enough, America’s idolatry and mockery of the God of Abraham, Isaac and Jacob, and the absolute disdain for His Son Jesus Christ who hath shed His grace upon thee will all be over with. America is turning into hell, and she still thinks it’s a party (Jeremiah 9:1-13).