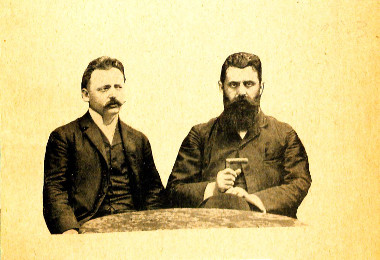 The resolution of the God issue, which involves the sanctification of God’s Name, should be the paramount purpose of the State of Israel. That and that alone is the only logical purpose of a Republic whose name is Yisrael, a Republic whose way of life is guided by the teachings and laws of the Torah. This Republic is not a theocracy, a regime ruled by a priestly class. No, I am referring to a Republic in which the sovereign power resides in the People who recognize God, the Ruler of heaven and earth.

Falling away from God

Of course, this idea clashes with normless Democracy, which philosophers despised until the Enlightenment. The “great thinkers” of the Enlightenment – Hobbes, Locke, and Hume – were philosophical skeptics and atheists. Their bête noir was the “Old Testament,” on which Christianity and the power of the Church stood or fell. The philosophers won the battle. Thanks to those philosophers, the scientific revolution initiated by Galileo and Newton, and culminating in the nineteenth century, engendered the secularism that has since dominated every level of education in the democratic world, which today finds itself in intellectual and moral disarray threatened by Islam.

It was in nineteenth-century Europe that secular Zionism was born and articulated in Theodor Herzl’s The Jewish State. This politically inspiring but intellectually shallow book became the bible of modern Israel.

The most significant aspect of this book is its tacit adoption of the antinomianism of Christianity:

This intellectually modest book reduced the profound multidisciplinary wisdom of the Torah – which has no equal in the Gentile world – to a religion. It offered Jews a one-dimensional secular ideology. This secularism separated the Torah from a vast body of knowledge which included biology, sociology, statecraft, and public policy.

Herzl had aped the famous Italian Garibaldi (1861-1882), a dashing but philosophically shallow intellectual.

Unfortunately, Herzl had no Madison or Hamilton to enlighten him about the philosophical statecraft of the Greek and Roman classics. He had no professional knowledge of how to design political institutions that can reconcile permanence and change (the key to the original genius of the American Constitution, forgotten by conservative American politicians).

All honor to Herzl, for his great courage and dedication. But the antinomianism of his little book is at war with the sanctification of God’s Name. And so it will remain as long as Israel answers to politicians ignorant of the wisdom of the Torah. Christian Hebraists such as Harvard president Samuel Langdon and Yale President Ezra Stiles discerned this wisdom. The “demotion” of God by Israeli prime ministers is ironic. It conceptually justifies the refusal of the Palestinian Authority to recognize Israel as the nation-state of the Jews!

However, that refusal is providential. God is using Muslims to cast contempt on Israel’s Government, on its paucity of Jewish ideas and integrity, so obvious in the drivel of Israeli prime ministers. Their lack of intellectual integrity is most evident in their psychobabble about “peace” with Jew-hating Muslims. These Muslims are steeped in paganism, which harbors a psychotic love of death or “necrophilia”. This psychosis manifests in their using children as human bombs, as sacrifices to Allah. Does anyone remember the Canaanite sacrifices of children to Baal?

Israeli prime ministers are not stupid. However, their sincere desire for peace has become a fixation. This fixation has emasculated them and corrupted their intellects. By rubbing elbows with Muslims in a fictitious peace process, they have been infected by the Muslim’s tendency of deceit and dissembling.

Look around the bloody Middle East. You have to be deaf, dumb, and blind to be unaware that peace between Jews and the disciples of Mohammad is impossible. Only those given to arrant utopianism believe they can talk to Muslims and reverse Islam’s 1400-year history of politicide and genocide.

It’s pertinent to point out that Islam’s deity, Allah, sanctifies deceit and dissembling. Muslims call this taqiyya. This theologically sanctified mendacity of Islam stands in striking contrast to the way of life sanctified by the God of Israel, one of whose Names is Truth.

If you disrespect truth, you become vulnerable to lies.

Precisely because Israeli prime ministers have not sanctified the God of Truth, Israel is constantly being degraded by the liars of Islam. Enough to mention the “Palestinian people,” whose very name is a lie. After all, it’s nothing more than a consortium of diverse terrorist groups hailing from various parts of the Middle East and North Africa.

Their cockamamie leader, Mahmoud Abbas, must obviously pose as a disciple of Mohammad. Muhammad’s name gives the Palestinian Authority a specious authenticity. It induces various Israeli and America decision makers to parade the PA as a “peace partner”. Here Abbas looks as if he morphed into a mother Theresa!

So many years of this gibberish about Abbas and his terrorist-addicted Palestinian Authority have stupefied American and Israeli alike. So it any wonder that the clueless American President Barack Obama – himself a cockamamie Muslim – utters gibberish about his recent nuclear agreement with Iran as the only way to avoid war? As if Iran’s Mullocracy had never said “Death to America” and Death to Israel”?

God as an all-important issue

Viewed in the light of this mendacity and maledictions, and taking into account the emergence of a nuclear Iran in the oil-rich Middle East on the one hand, and the latter’s economic and strategic significance vis-à-vis Russia on the other, I dare say that the present eclipse of God will make the two world wars of the twentieth century appear as limited skirmishes.

Ignored is the global significance of Khomeini’s 1979 revolution in Iran and Iran’s accessibility to nuclear weapons. Any serious understanding of what the Khomeini revolution portends for mankind will prompt astute observers to regard a nuclear Iran as clear and dangerous threat to Western Civilization.

The magnitude of this threat arises from the God issue. That is the only serious issue for the Mullocracy in Iran. For Iran can only think in global terms, more so than any world-conquering visionary like Hitler.

Notice, however, that the God issue did not clearly manifest in the First World War. It was dimly manifested in Second World War via the Nazi genocide against the Jews, the true God-bearers of monotheism. We are stumbling along on the confusing periphery of the Third World War. The Allah-intoxicated Khomeini pronounced that War in 1979.

The resolution of the God issue is not far away.◙☼

Americans, so easy to control