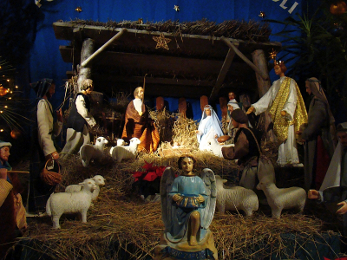 Have you ever heard parents lament over how their children pay more attention to the gifts under the tree at Christmastime than to the reason for the tree? Then perhaps this two-part fictional story will be the perfect gift from my family to yours. It was written to help put Christ back into Christmas while celebrating all the gala traditions that have become associated with the holiday. Hopefully, It will transport young and old alike to the time of Christ and the very first Christmas tree that was cut down just before Easter.

You can make this a new holiday tradition to be read under the lights of your very own Christmas tree while reminding all that His gift is truly the greatest gift of all! It is my great hope that all who will enjoy this story will never look at a Christmas tree again without thinking of our Lord and Savior. Take Aunt RoRo’s advice — go and enjoy the decorations, friends and family gatherings, the music, the traditional foods, and of course the gifts, just don’t forget to celebrate the greatest gift of all!

On a snowy Christmas Eve, David pressed his nose against a cold window as he watched the snow whirling around and around in ever-changing patterns.

Dad walked over and put his hand on David’s shoulder. “It looks like we’re going to have a White Christmas after all.”

David giggled with excitement as he looked for signs of Old St. Nick in the evening sky.

“Look what Mom is bringing in,” Dad said as he quickly walked over to help Mom carry in the tray of hot cocoa.

Mom smiled. “I thought it would be nice to sit by the tree and drink hot cocoa together.”

Dad agreed. “That sounds good to me.”

“It sounds good to me, too,” David chimed in as he ran to get his cup.

The whole room was filled with that very special Christmastime smell of a fresh cut pine tree. David sipped his hot cocoa and then walked over to the towering tree. He caressed the ends of its soft branches between his fingers as he looked up at its glowing star. “You know,” he said, “I think this is the best tree we ever had.”

Mom laughed. “You say that every year, David.”

“I do?” David asked. “Dad, what was the first Christmas tree like?”

Dad sank into his favorite chair. “Son, I guess you’re old enough to appreciate this story. Grandpa told it to me a long time ago when I was just about your age. That story changed my whole life.”

“It did?” David interrupted. “Wow! That must have been some tree! Was it bigger than this one? Did it have more lights? How about its branches? I bet they were full and really, really green!”

“No, David,” Dad said. “It wasn’t like that at all. As a matter of fact, it was the ugliest tree in the whole forest. Come and sit on my lap and I’ll start from the beginning.

About 2,000 years ago an ordinary tree was cut down by a Roman soldier.”

“A Roman soldier!” David cried out with surprise. “I thought they were the bad guys. I didn’t know they celebrated Christmas!”

“That’s weird,” said a puzzled David. “I thought it was there when Jesus was born on Christmas Day?”

“Why don’t you let Dad finish his story,” Mom said.

Dad continued. “Now after Jesus was sentenced to die, the Romans went out to cut down a tree to make the cross. Of course, they always picked the worst trees in the forest for crosses–the ones that were a little rotted and already half dead. On this day they picked the worst tree ever. In fact, one of the Romans said he thought it was the ugliest tree he ever saw. It was that ugly old tree that Jesus was nailed to when He died for our sins.”

Why did He have to die?

“That makes me sad,” David said with his head hanging down low. “Why did they have to do that to Jesus? He didn’t do anything to them.”

Dad answered. “If Jesus didn’t die on the cross for us, we wouldn’t be able to go to Heaven and be with Him. We’re just not good enough to deserve Heaven–none of us are. We deserve death because of all our sins. He conquered death and opened the gates of Heaven for us.”

“Son, when we say Jesus ‘conquered death’ we mean that after He died, three days later He rose again. He is no longer dead. By doing that, by rising again, He proved that He is the Son of God and that there is life after death. Death couldn’t hold him down, and now it can’t hold us down because of Him. Do you understand what I’m trying to say, son?”

“I think so. But what about that ugly old tree? How did it get to be the first Christmas tree?” David asked.

“Well, son, after Jesus died, they took Him off the cross. Then the Romans took those ugly old sticks and threw them into a pile of firewood. But just before they were about to use that wood for fire, it started to rain and the wood got all wet. So, the Romans left that wood alone and used a different pile of dry wood for their fires.”

“Boy, that was lucky for the tree,” David said.

Dad nodded. “It sure was, and it was lucky for us too, because right after that, one of Jesus’ followers came along and took that tree to his house-except he didn’t know that it was the same wood from Jesus’ cross.”

“He didn’t?” David asked in amazement. “Didn’t anybody want Jesus’ cross? Boy, I sure would have!”

“Yes, son, so would I.” Dad agreed. “I guess they didn’t realize how important that cross was. You see, right after Jesus died all His followers were sad, confused, and frightened.”

“I guess that makes sense,” David said. “So, what happened to the tree?”

“It sat at the bottom of the firewood pile for many months. Then, one evening, there was a terrible storm with terrible winds. The howling winds blew the fire wood all around town. Most of the wood splintered and broke, except for the wood of the cross. Somehow, the wind got a hold of the old wood from the cross and blew it into the center of town where there was a bed of flowers growing. Right in the middle of this colorful bed of beautiful flowers, standing upright and proud, was this ugly old stick.

“People passed by and laughed at it. It looked so funny standing there between all the beautiful flowers. It was about this time that the Romans started persecuting Christians–”

“Well, son,” Dad said very sadly. “The Romans thought the Christians would hurt the Roman Empire in some way. They didn’t understand what being a Christian really meant. So, they started being very mean to the followers of Jesus. They did terrible, terrible things to them.”

They knew not what they did

“It’s not that simple to understand, David.” Dad continued. “You see, the Romans didn’t understand Jesus or the things He taught. It took a long time before they did.”

David added, “I wouldn’t want anybody to be mean to me just because I love Jesus.”

Dad answered, “I wish I could promise you that, son. Sometimes it hurts to stand up for the things we believe. We haven’t had anything mean like that happen to us; but if it ever does, it would hurt a whole lot more to deny Jesus. Do you understand what I’m saying?”

“Sure I do, Dad. You don’t have to worry about me. I’m not afraid to say I love Jesus,” David replied.

“That’s good, son, because if you always act that way, you’ll get to see the first Christmas tree.”

“I hope not for a long time.” Dad smiled. “Let’s get back to the story and I’ll explain.

When enemies of God agree