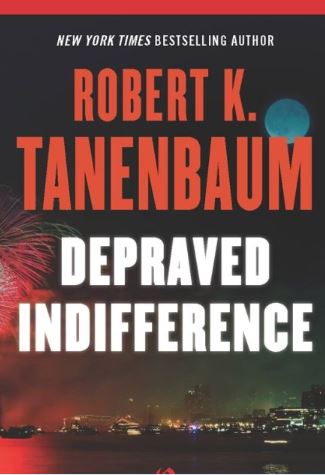 The term depraved indifference has a special meaning in criminal law. Prosecutors usually apply it to acts that kill someone. Usually, when a person kills another in anger and without thinking, that person commits manslaughter. But suppose a person knows, or ought to know, that his act might kill someone, and does it anyway. Then he acts with depraved indifference to human life, and prosecutors can try him for murder. In most such cases, prosecutors charge the person with second-degree murder. (Doing a thing with intent to kill, and planning it ahead of time, makes it first-degree murder.)

Several authors have written novels with the title Depraved Indifference. Robert K. Tanenbaum’s 1989 entry focuses on a terrorist act. Someone plants a bomb in a locker in Grand Central Station. Police, recovering it and trying to defuse it, think it’s a dud. It isn’t. A police officer dies in line of duty. Depraved indifference is the mildest accusation one can make here. Certain elements of the bomb lead prosecutors to conclude: the bomber meant to kill a member of the Bomb Squad. The law calls that “premeditation.”

So the lead prosecutor intends to prosecute the gang for first-degree murder. Soon the situation gets more interesting, in a sick-making way. Special interests within the FBI, the CIA, and the Miami mob all conspire to undermine the case. Some of those special interests consider the chief suspect a friend. Others simply don’t want certain embarrassing facts to come to light in a public trial. Among them: the United States recruited this chief suspect after World War II for his intelligence value. And they did so, knowing that person committed serious war crimes in occupied Yugoslavia and specifically Croatia. That act alone constituted depraved indifference to justice. And in modern times (1976), a New York prosecutor must fight certain people whom he finds similarly indifferent to justice—and to his own life.

As he did three years earlier (No Lesser Plea), Tanenbaum scathingly indicts a host of institutional suspects, from the intelligence community to the New York County DA’s office itself. Before, Tanenbaum concerned himself with an office merely wishing to “clear” cases no matter whom anyone hurt. Now he extends that, to those wanting to do special favors without regard to any concept of justice.

Tanenbaum has a passion for justice, and it shows in his work. He worked in that same New York County DA’s office for many years – and never lost a case. While in that office, he saw many things he now feels the public should see, though they won’t like it. In fact, Depraved Indifference is his second novel in a series featuring continuing characters.

Continuing-character novels always risk a salient weakness. Must the reader go back to earlier installments to pick up the thread? For good novels, that shouldn’t matter. Happily, it doesn’t matter here. Tanenbaum skillfully repeats whatever one needs to know from his first installment to understand this one—and no more.

Of course, this work suffers from the usual pitfalls of omniscient, or ever-shifting, point of view. At least once Tanenbaum doesn’t keep straight what the current POV character knows, and when he knew it. More often Tanenbaum must withhold information as to the state of mind (mens rea in legalese) of the POV character. When such a character knows something, and keeps it a secret, the author cheats us. When the author says ahead of time how a character will feel about doing something later, he cheats again. For these reasons, the best authors limit their points-of-view to one or two characters. Other characters can then fill in missing pieces after the fact.

Furthermore, the protagonists deal here with too many malefactors, or seeming malefactors, to count. One literally needs a scorecard to keep them all straight. Tanenbaum included one “special interest” only to rescue the protagonist from others, and explain the motive of the villain-in-chief. He then almost throws those characters away. For shame.

But one should not quibble. An author can cheat in a worse way—by having people do things out of character or having events play out too well to be true. Tanenbaum never makes that kind of error. His lead characters even have to compromise, and allow minor concessions to serve a greater goal. In this Tanenbaum acts the way he must have acted dozens of times in his career as a prosecutor. Any prosecutor often lets a little fish swim away to catch a bigger fish. No doubt Tanenbaum did the same.

In sum, Tanenbaum again exposes the scandalous state of prosecuting-attorney offices and federal law-enforcement and intelligence offices. He also leaves us wanting more of the same—because he has many more ugly stories to tell.