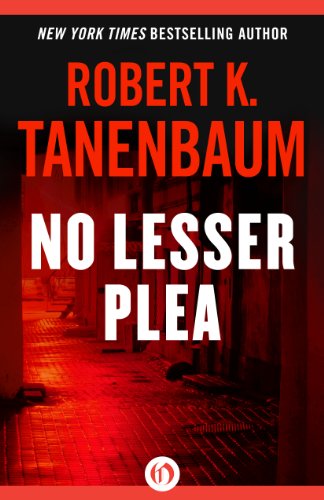 No Lesser Plea, by Robert K. Tanenbaum, first came out in 1987 from Franklin Watts Publishing. Now Amazon.com has re-issued it in its Kindle store.

In No Lesser Plea, Tanenbaum began a series of scathing indictments of American criminal justice. Tanenbaum saw this every day as a New York Assistant District Attorney. (In fact he rose to run the Homicide Bureau under the legendary New York County DA Frank Hogan. And in all his tenure in office, he never lost a felony case.) In No Lesser Plea and the novels that followed, Tanenbaum wrote in stark protest against what he saw. He saw criminals gaming the system, with plenty of pretending professionals willing, if not witting, to aid and abet them. (These professionals have their credentials, all right – but Tanenbaum strongly suggests they mean zero, zip and zilch.) But he also saw much more than that. His fellow officers routinely sacrificed justice to politics and expediency. They did so especially in the Seventies, when New York City literally couldn’t afford to build enough courthouses and prisons.

But in Tanenbaum’s story universe, two enduring heroes emerged. No Lesser Plea introduces them. It also gives a guided tour of the near-breakdown of the Manhattan County DA’s office. Fyodor Dostoyevsky couldn’t have done better.

The story begins with an armed robbery and murder, and with the criminal who orchestrates it. Here Tanenbaum shows something wrong with many institutions besides criminal justice. He skewers those well-meaning “reformers” all too willing to believe in their own success. Such people see success when in fact they have failed utterly. Case in point: a criminal fools his preacher, and thinks nothing of fooling a cadre of psychiatrists. All he needs to do is stall the trial until the case grows stale.

The psychiatrists, moreover, set themselves up for this criminal to fool them. A senior resident wants nothing more than to try to control human behavior with drugs. His attendings want nothing more than a publication credit for a case of “incompetence to stand trial” that manifests at a convenient moment.

As if that didn’t make enough mischief, key judges, and even some in the DA’s office, want nothing more than to “clear” cases. This usually means plea bargaining. The central figure in No Lesser Plea feels monumental disgust. Some people, he knows, simply need to go to prison for a long time. Hence his written order on the case the novel begins with. The criminal committed premeditated murder. His order: accept no lesser plea than guilty on that count.

A call for all to accept no lesser plea

Fiction can be an excellent way to show the warts in a society, or a part of it where the author works. So it is in No Lesser Plea. Tanenbaum calls us to recognize something too many institutions have forgotten. Politicians, and all too many preachers, cannot recognize, or deal with, evil. Tanenbaum wants his readers, not to apologize for evil, but to fight it. Like his hero, he will accept no lesser plea.

He does not achieve his aim by depicting the kind of reform our society needs. No one would believe it if he did. Instead he shows his heroes fighting against evil as best they can. And he leaves it to us, his readers, to recognize the problem and decide how to solve it.

Depraved indifference to more than life

Infamy behind the scenes