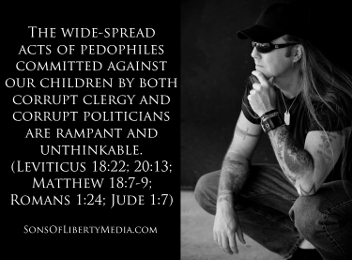 “If it’s after eight, it’s too late!” Every year at Gay Pride parades, a continent from NAMBLA shows up to repeat that slogan. They think nothing of the exploitation of children, and try to pretend they’re doing those children a favor.

Why won’t America stand up for its children?

It amazes me to think that Americans will literally take all day and all night to prove a point when it comes to propping up their favorite politicians. Yet, when it comes time to deal with the politicians for advocating the very crimes that America’s children are dealing with, they just can’t find the time to actually love on them enough to actually stand up and fight for them (James 2:14-26).

I knew when writing this column that I was writing to a nation that already has given pass to a corrupt government that sanctions sodomy, which American law condemns in all 50 states (read your state statute), as well as the murder of the innocent (Proverbs 6:17), which is a disastrous combination (Psalm 9:17; Proverbs 14:34).

As the American people are continuously and incrementally being desensitized, last week National Geographic took the time to dare the justice of God by boasting of the confusion (Daniel 9:7) that is being laid onto the backs of America’s children through the exploitation of a 9-year-old boy on their front cover.

This is European tyranny, and if you want to advocate what God condemns by sowing what the Europeans have sown, you are going to reap what they have been reaping (Romans 6:23; Galatians 6:7).

It has been spoon feed to the American sheeple that these distorted sodomites that have chosen the acts of the abominable (Deuteronomy 30:19) wanted to just be left alone. In fact these sodomites have done just the exact opposite. They have attacked anyone and everyone that would stand on the side of the law, which calls these crimes for what they are, “crimes against nature” (Romans 1:24). All the while, the children have been the end aim and Americans know this.

The Homosexual Manifesto has been in the congressional record since 1987.

National Geographic has hailed the cover as progress after decades of marginalization and discrimination.

The little boy said of himself, “The doctor said that when I was born that I was a boy but I knew in my heart that I was a girl. I am made up of some boy body parts but that is not wrong, that is o.k.” He said this as if to suggest that God somehow made a mistake. Not!

These parents need to be held responsible for child abuse and so do the people that help advocate these crimes. It is their duty and obligation before God to raise them according to the laws of God, which are foundational law in the United States of America (Proverbs 22:6; Luke 7:35).

Like that of anything else the media wants to advocate, they want you to believe that everyone, for the most part, is in support of what these sodomites advocate. The opposite is true. Furthermore, the mother of this young boy has a whopping 2,000 followers and the YouTube video where the little boy is being led about as to what to answer when questioned, has had the comments disabled. I will tell you why they are disabled. Like that of the control the media wants over the minds of the people, they do not want you to know of the outrage that is taking place over this issue.

The Media is Pushing This….

Listen to some of these headlines that the media is pushing on you America!

And Americans look the other way.

America, they are simply trying to normalize the crimes through desensitization.

“60 Minutes” in Australia, did an expose of “Worldwide Pedophile Network,” where the politicians were being exposed for their crimes against children (Romans 1:24). They also interviewed an individual who was advocating the normalization of sexual consent of adults with children. The report on You Tube has been conveniently scrubbed.

In America, this has been exposed over and over again only to be blacked out by a media that is bought and paid for. This is to the demise of America as we know it.

Why would the modern American Church stand down concerning the homosexual agenda? (Leviticus 18:22; 20:13; Romans 1:24).

Why are politicians in Washington D.C. voting in favor of what God calls an Abomination? (Exodus 22:22-24; Luke 17:2). They know that if they can demoralize the people, they can rule with an easy hand.

The wide-spread acts of pedophiles committed against our children by both corrupt clergy and corrupt politicians are rampant and unthinkable. (Leviticus 18:22; 20:13; Matthew 18:7-9; Romans 1:24; Jude 1:7)

At the last minute, before airing, unknown congressmen threatened the TV Cable industry with restrictive legislation if this documentary was aired.

Almost immediately, unknown persons, who ordered all copies destroyed, purchased the rights to the documentary. A copy of this videotape was furnished anonymously to former Nebraska state senator and attorney John De Camp, who made it available to retired FBI Agent Ted L. Gunderson.

On Tuesday May 3rd, 1994, the video that you are about to watch was scheduled to air on the Discovery Channel. Influential members of Congress applied pressure to the cable industry to stop the airing of the program and destroy all copies.

It was already listed nation-wide in the April 30th-May 6th edition of TV Guide and newspaper supplements.

The Discovery Channel and Yorkshire Television were reimbursed for the ¼ to ½ million dollars production costs.

This is the program that they did not want you to see!