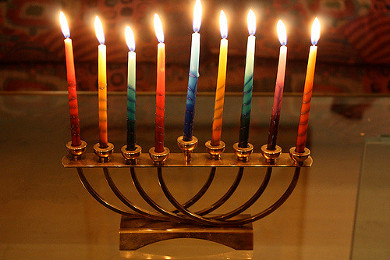 I would like to share with you my thoughts on the relationship between Chanukah and Israel’s present plight. Here I shall apply certain insights of Rabbi Matis Weinberg’s Patterns of Time. Much that I will say is highly speculative, but I think informative, perhaps even encouraging.

As is well known, the story of Joseph always precedes and continues through Chanukah. Why is this so? To answer this question, you have to bear in mind that Chanukah represents, among more arcane things, the victory of the Jews over the Greeks—Yavan in Hebrew. The worst enemies of the Jews, however, were within their own camp, the “Hellenized” Jews. And yet, there is something about Yavan, or Greek civilization, that is very close to Judaism, hence all the more tempting to the Jews of that time. We learn from Weinberg that Greek is the only language apart from Hebrew in which a Torah scroll may be written and have Kedusha, holiness!

That made Greek civilization enticing to Jews was not only its emphasis on the beautiful, for which it has been celebrated (recall Noah’s son Yefet—signifying beauty). But as we know from Plato and Aristotle, Yavan also fostered a love of wisdom, profound interest in ethics and civic virtue, as well as in rhetoric. We also know that Joseph was so beautiful that women adored him, but that despite great temptation he remained chaste. He was called “Joseph the Tzadik,” the righteous. Indeed, despite his living in Egypt, he preserved his Jewish identity.

Now it so happens that the dove, Yonah (feminine form of the word Yon) symbolizes Israel. As Weinberg points out, the Hebrew word for dove, Yon, is spelled the same in Hebrew as the word for Greece (Y a V a N): Yud, Vav, Nun! (There are no vowels in Hebrew.) The city of the Yonah is called “Tziyon”—Zion. The letter tzade precedes the yud, vav, nun. The tzade represents Joseph the Tzadik. So Yavan is very close indeed to Joseph. Only it lacks the tzade of Joseph, i.e., his inner righteousness! Bear this in mind.

The story of Joseph is interrupted by the story of Judah and Tamar. Tamar disguises herself as a harlot to entice Judah. Notice that Judah, when he discovers her identity and motive, calls her more righteous than he, for reasons I will not go into here.

However, as I learned after 1999 from Uriel Zimmer’s Torah-Judaism and the State of Israel, “‘Klal Yisroel’ does not, in truth, constitute a ‘nation’ in the accepted sense of the word. Nor is it merely a ‘different nation’ as compared with other nations.” Zimmer explains: “According to Jewish belief, the Jewish People constitutes a species of its own: ‘This People I have created for Myself’” (Isaiah 43:1). The Jewish People “is a special, separate act of Creation by the Almighty” (Exod.15). In fact, the Tanya, by Rabbi Shneuir Zalman, “mentions the ‘second soul of the Jews’ and explains that although the Jews are physically similar, to all other nations, yet they are endowed with a ‘second soul’ that renders them a separate species.”

This is a deep esoteric subject, which I leave to Kabbalists who understand the metaphysical significance of Klal Yisroel and Chanukah. But this far transcends what passes today for “Zionism” even among many of its religious champions.

In any event, Chanukah represents more than the victory of the Jews over the Greeks. It points to a synthesis of the primordial dichotomy represented by Joseph and Judah—the individual and the Klal. (Perhaps with that synthesis, the prophecy that Yefet, beauty, will dwell in the tents of Shem—Exod. 9:26—will be fulfilled.) But what has all this to do with contemporary Israel? Here I am going to be quite speculative.

Lessons for our time

Binyamin Netanyahu is the inverse of Joseph, but not in all respects. Like Joseph he is attractive, an excellent speaker, a rhetorician. Like Joseph, Netanyahu was educated in a foreign land. But whereas Joseph retained his Jewish identity in Egypt, Netanyahu became Americanized, i.e., “Hellenized”!

Nevertheless, Netanyahu is linked verbally or rhetorically to the National Camp—to what should be Judah. The National Camp, however, is impotent. It consists of political fragments more or less animated by egoism—now led by Binyamin Netanyahu, whose first name, in Hebrew, means “son of the right hand,” signifying strength, which hardly fits today’s Binyamin Netanyahu. But as we see in the story of Joseph, Binyamin, the son of the beautiful Rachel, is linked to Judah, the son of Leah. Because of this linkage, the tribes of Binyamin and Judah did not disappear, as did the other ten tribes. This linkage points to the ultimate synthesis of the individual and the Klal.

Notice that since its reestablishment in 1948, Israel has never had a prime minister as articulate as Netanyahu (“Joseph”). Nor has the National Camp (“Judah”) been in such self-destructive disarray, now led by Netanyahu. This intelligent, sweet talker (unlike Joseph the sweet dreamer) has succumbed to foolishness and treacherous lies, which will arouse the desire for a new kind of national leader—a son of the “right hand.”

Returning to Chanukah: As Rabbi Weinberg notes, Chanukah is the one holiday whose essence is Hallel (praise) and Hoda’ah (thanks). Judah, of course, exemplifies Hoda’ah (recall what Leah said (in Exod. 29:35) when Judah was born. We learn that Israel’s only justification is to praise or sanctify God’s Name, as is evident throughout the Siddur [the prayer book] , from which thanks or gratitude follows. But the National Camp has failed in this most decisive respect. In 1999, the National Religious Party was urged to head a New National Camp, but it lacked a “right hand.” But this is no cause for despair.

Despite Netan-yahu, but as one may infer from its Hebrew meaning, perhaps he has been “given by God” to hasten the end of Israel’s corrupt and despotic system of government. His honeyed-tongued rhetoric has betrayed his given name, for his verbal surrender of Judea and Samaria makes a mockery of God’s creation, of Klal Yisrael, and this surrender, if implemented. may shock Judah, awaken Judah’s theological consciousness, and ignite the repressed but explosive power of Klal Yisroel, whose sanctification of God’s Name will at last overcome the enemies of God’s People.