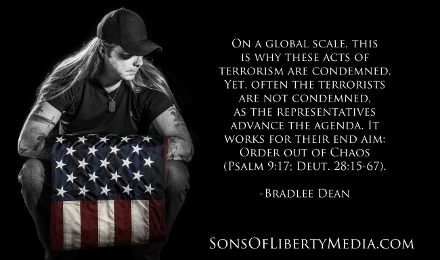 “Terrorism is the best political weapon for nothing drives people harder than a fear of sudden death.”

Yesterday, The Clarion project brought us “Perhaps the Most Barbaric ISIS Execution Video Ever.”

Is it not amazing how these videos are conveniently distributed, as well as done professionally with jib arms and dual cameras? Of course, it would not be complete without sound effects, which are all-inclusive.

The message of those who are behind these barbaric acts, namely the “New World Order” minions, is “Submit to Islam or else!”

On a global scale, this is why these acts of terrorism are condemned. Yet, often the terrorists are not condemned, as the representatives advance the agenda. It works for their end aim: Order out of Chaos (Psalm 9:17; Deuteronomy 28:15-67).

Order out of Chaos

Chancellor of Germany Angela Merkel, Time magazine’s 2015 “Person of the Year,” was responsible for slapping the German flag and saying “Islam belongs to Germany.” She knows exactly what she is doing by opening the flood gates to illegal Muslim immigrants, and said, “Refugees had not brought terrorism to Germany.” She is right, she did.

On the 28th, a headline read, “Muslim Refugees set on Fire man Sleeping on Bench in Berlin.”

Tyrants of the Year

Islam is not a religion of peace, it’s a political theory of conquest that seeks domination by any means.

Remember, it was the foreign agent, who has been aiding and abetting ISIS, in the people’s White House who said:

The future must not belong to those who slander the prophet of Islam.

Do not ever think that this criminal does not know what he is doing (Article 3, Section 3, The United States Constitution).

America, make yourselves sheep and the wolves will devour, and devouring they are.

Ever since September 11, 2001, it has not ceased to amaze me the lengths that corruption in American government, along with the use of the “Useful idiots” in the media, have gone to use fear as a tool to oppress and control the American people.

After 9/11, it was Congressman Jim McDermott who said,

You can get people to do anything with fear.

Of course, he is talking about a diabolical fear, a fear of consequence if orders are not obeyed, which breaks down to the fear of man, which brings about snare, rather than the fear of God (Proverbs 29:25).

The system of terror was essential to Stalinism… Terror was the creation to mold politically the control that they wanted.

Don’t forget what Henry Kissinger said about those who reject the New World Order,

Terrorists are just people who reject the New World Order.

Who is a terrorist?

Have you taken the time to see what the corrupt in your government has deemed a “Terrorist”?

Here are a few examples….

Keep in mind, like that of any tyrannical system, a conspiracy, as I just showed you, always contemplated not merely overcoming current opposition but exterminating elements which could not be reconciled with its philosophy of the state.

On December 26, 2016, Barrack Hussein Obama signed and illegal “Ministry of truth” bill. The truth, according to their wicked minds, is what they say it is (Isaiah 5:20).

Operation Northwoods: In the early 1960s, American military leaders drafted plans to create public support for a war against Cuba, to oust Fidel Castro from power. The plans included committing acts of terrorism in U.S. cities, killing innocent people and U.S. soldiers, blowing up a U.S. ship, assassinating Cuban émigrés, sinking boats of Cuban refugees, and hijacking planes. The plans were all approved by the Joint Chiefs of Staff, but were reportedly rejected by the civilian leadership, then kept secret for nearly 40 years.

Maybe Americans should take the time to see the history of Islam, which was used to help establish “Nazism” or a “New Order” (Hosea 4:6).
History shows that Hitler worked with the Muslims to do his biddings for him, in order to eradicate anyone that would “dare” stand in his way, or should I say his “political opposition.”

Or perhaps, Americans should take the time to see that Prescott Bush’s father (American banker, Wall Street Executive, Treasurer for the first national capital campaign of Planned Parenthood, Senator for Connecticut) to George Bush Sr. and grandfather to George W. Bush was indicted in 1942 for “trading with the enemy” (2 Corinthians 11:14).

If Americans would simply turn to their forefathers, who were called “Terrorists” by a tyrannical King in England, maybe they would clearly see as to what is taking place this country today. Read what could be called the preamble to the United States Constitution. the Declaration of Independence.

America has had warning

We have been warned America (Ezekiel 33).

If tyranny or oppression come into this land, it will be in the guise of fighting a foreign enemy.

Maybe Americans will come to the realization that those who have been calling these things conspiracy theories are the one’s helping cover for the conspirators (Jeremiah 11:9).

All information here is well documented and assessable. Wake-up! (Ephesians 5:16)

America it is for us to send the message, through our actions (Psalm 27), that we will not be submit to tyranny in any sense of the word, and those who advocate lawlessness will be lawfully dealt with (Isaiah 26:9).