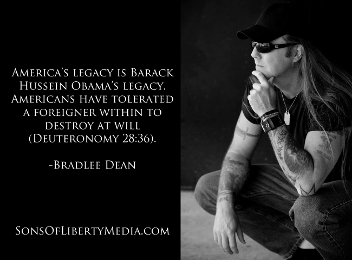 Find out just what any people will quietly submit to and you have the exact measure of the injustice and wrong which will be imposed on them.

Legacy: Anything handed down from the past, as from a predecessor.

I can sum up his legacy for you in short order here:

ISIS is the modern-day version of Hitler’s SS

But American already knew this (Leviticus 26:17).

He has warred against American freedoms, our God, our rights, our Constitution, our veterans, our patriots, our unborn, our families, etc. He is the enemy to everything that we, as Americans, stand for. This is his legacy.

When the White House attacks

Recently, a self proclaimed law professor on Fox News explained in one sentence what is wrong with this country. He said, “The president can do whatever he wants, he is the president” (Psalm 94:20).

So it stands true, that they will always do whatever you let them get away with.

Lord Acton was correct when he stated, “Power tends to corrupt, and absolute power corrupts absolutely.”

Remember, today’s conservatives are yesterday’s liberals. The law professor (sworn to the bar, not the Constitution mind you) I mentioned was talking about how Barack Hussein Obama Soetoro Sobarkah, the foreign agent in the people’s White House who has 47 different social security numbers and a fake birth certificate, somehow can do whatever he wants.

I guess somewhere, I have yet to read it anywhere in any founding document, some people have gotten the idea that any president can do whatever he wants to. That is not true! As long as the people believe it to be so, it must be true, right? That is not true. Apparently, what this law professor said was true because the people in this country have given Obama a free hand to do whatever he wants to do. I guess that is all he has to do is call it an “executive order,” and like a magic wand, it somehow becomes law.

It seems that this law professor, along with the American people, have not taken the time to understand that government in this country is limited to the confines of constitutional law, which are found in our Constitutional Republic, and can run off the powers that have been delegated to them by the people, who elect them as representatives on their behalf to exercise that authority.

America’s legacy is Barack Hussein Obama’s legacy. Americans have tolerated a foreigner within to destroy at will (Deuteronomy 28:36).

Americans have tolerated this criminal to advocate what God clearly condemns (Jeremiah 2:5), and disobey the God of Israel by giving a free hand to him who said at the offset of his unlawful incumbency that he would “Fundamentally transform America.” Instead of taking responsibility and throwing off this criminal administration (Article 2, section 4 & Article 3, section 3 of the united States Constitution) and indicting every one of them, Americans let him do it.

If it is not so, then I ask, How can two walk together unless they be agreed? (Amos 3:3) This is America’s legacy.

Background checks? Try this instead

Peace between Israel and Islam? Never