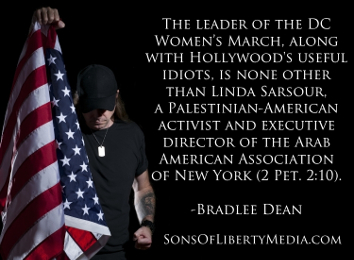 “Accuse the other side of which you are guilty of.” So said Joseph Gobbles, the master Nazi propaganda minister – equally good at recruiting useful idiots.

Over the last week, we have been hearing much of the DC Womens’ March. For example, the threats coming from the likes of Madonna, who spoke of “blowing up the White House,” while also shouting out vulgarities like “suck my d#@k!” (Yes you heard her right) and Ashley Judd, a self-professed Christian (Titus 1:16), making comments like “I feel Hitler in the streets,” “A mustache traded for a toupee,” “Nazis renamed.” Judd went on to make accusations concerning President Donald Trump with regard to favoring his daughter as being a “Favorite sex symbol.” She ended with “Our p#@@ies are for our pleasure and they are birthing a new generation…of nasty woman.”

Additionally, Scarlett Johansson complains about how male actors are paid more than female actors, and how when she was 15 years old she had to “use Planned Parenthood” (Proverbs 6:17).

So, what is it that we have here? Nothing but a bunch of out of control, lawless murderers, whores, hypocrites and feminists that want to lay the guilt of their choices onto the innocent in the womb, in which they themselves are guilty (1 John 3:1).

And a Muslim leads them

To take it a step further, look who is the leader of the DC Women’s March. It’s none other than Linda Sarsour. Sarsour is a Palestinian-American activist and executive director of the Arab American Association of New York.

Linda Sarsour is angry that US States don’t not allow Sharia Law. Oh, the Irony! Just think of this, a Muslim on the head of Hollywood’s “useful idiots,” promoting the murder of their own children so their enemies do not have to do it. Nazi feminists playing into the hands of their enemies.

Americans should pay attention to what this is breeding. To do otherwise is a disservice to yourselves and to your posterity.

What the useful idiots in Hollywood are really afraid of:

It must be some sort of prerequisite that if you want to be a part of Hollywood’s club of “useful idiots,” you had better come with full allegiance to the demonic system of anti-Christ if you want a job (1 John 2:15-16; Matthew 4:9).

Americans have the audacity to call these people stars; fallen stars would be more like it.

Is it not of interest to see how Satan himself mocks and counters everything that God, the Father of our Lord Jesus Christ, does? (Isaiah 14)

Hollywood has the walk of stars in the West, while the wise men followed the star in the East over the house where the Christ child was at (Matthew 2:2).

Hollywood has degenerated in so many ways to that which promotes and stands against America’s Christian heritage, which was founded in righteousness, goodness and truth (Ephesians 5:9).

The Mosaic institution in which America was founded and established is that which Christ fulfilled (Exodus 20; Romans 3:31).

Furthermore, if the American people knew the history of the “City of Churches” (Hollywood) and how that property was given away for free to those who would establish parishes, they would probably blush to see how far backwards things have gone in this country which they now tolerate (Isaiah 59).

This is just the tip of the iceberg when it comes to those that Americans are allowing to lead the way.

Ask yourself, what do those you follow stand or fall for?