The New York Times is among the most sorely biased mainstream media outlets for its pro-Palestinian and anti-Israel reportage. The editors and numerous offending writers ignore the watchdogs that continue to cite the Times for its inaccuracies and biases, refusing to be held accountable.

Israel alone comes in for criticism

Committee for Accuracy in Middle East Reporting in America (CAMERA) and StandWithUs (SWU) are two of numerous groups that have called the paper out for its particularly jaundiced language to describe Israel-Palestinian issues. Of all the disputed territories worldwide, only Israel’s has consistently been mischaracterized “occupied.” Of all the new home construction, only Israel’s is inaccurately called “settlements.” Islamic terrorism is given legitimacy with the use of “uprisings,” while Israel’s self-defense is publicized as “massacres, with an exaggerated body count that includes human shields designed to amplify Islamic “victimhood.” By contrast, the horrific massacre of the Fogel family was underreported and understated. The reporters weep for the Palestinian children whose parents eagerly sacrifice them for an ideology and largesse, but they scorn the Jewish victims. These egregious deeds of false news, alternative or selected facts, are inexcusable pro-Islamic propaganda.

The NYT prefers the dictatorships that peddle totalitarian ideologies and the destruction of fundamental rights. The reporters weep for the Palestinian children whose parents eagerly sacrifice them for an ideology and largesse, but they scorn the Jewish victims.

Above criticism, the reporters subvert history, morality, and democracy. Their weapon of words is designed to market the Islamic cause and facilitate its ongoing civilizational jihad. It is not unreasonable to suggest that the Times, by choosing a topic of assault already implemented by the Islamists, and then developing it into a viable concept, has become a shop window for terrorism, presenting a vendible narrative to educate the masses.

Contrary to all genuine world religions, the ideology of Islam has been territorial since its bloody conquest of Medina in the 7th century, through fourteen centuries and thousands of miles of what we now accept as the Islamic world, including Algeria, Egypt, Iraq, Iran, Libya, Morocco, Syria, Tunisia, and parts of India and China. They sacked the Romans and the Vatican in 846 (returning to Italy with a vengeance) and Christendom’s Constantinople in 1453. They went as far as Iceland, and plundered America in the 1800s, when they captured citizens and sailors and sold them into slavery in Algiers. They proceeded into Albania, Armenia, Austria, Belarus, Bulgaria, Bosnia-Herzegovina, Crete, Cyprus, France, Georgia, Greece, Hungary, Italy, Lithuania, Macedonia, Moldova, Montenegro, Poland, Portugal, Spain, Romania, Russia, Sardinia, Serbia, Sicily, Slovakia, Switzerland, and Ukraine, yet they paint Islam as a genuine religion and themselves as victims in a world of intolerance.

But always the battle is fiercest over Israel. Where Muslims cannot migrate, flood the land, infiltrate the infidels and impose their rules for Western accommodation, they create a false narrative of previous existence and ownership, such as in Israel, with accusations that Jewish population growth is overtaking “Palestinian land.” The Jewish population of the West Bank, historically and biblically called Judea and Samaria, has been part of the landscape for centuries. Despite Arab revisionism and the New York Times’ insistence, the homes are not settlements and the territory is neither “occupied” nor Palestinian.

In 1994, Madeleine Albright, then-Ambassador to the UN, said, “We simply do not support the description of the territories occupied by Israel in the 1967 war as ‘occupied Palestinian territory.’ In the view of my government, this language could be taken to indicate sovereignty; a matter which both Israel and the PLO have agreed must be decided in negotiations on the final status of the territories.” The land is “disputed.” The mischievous and inaccurate term “occupied territories” should never be parroted by a journalist trained to value truth above all.

In 2013, Ambassador to Canada and expert in international law, Alan Baker, penned Ten Basic Points: Israel’s Right to Judea and Samaria. He explained that the legality of the Judean and Samarian communities, stemming from the historic, indigenous and legal rights of the Jewish people to settle in the area, were granted pursuant to valid and binding international legal instruments accepted by the international community – and they remain undeniable and unquestionable. The Palestinian leadership, in the still valid 1995 Interim Agreement (Oslo 2), agreed to and accepted Israel’s continued presence pending the outcome of the permanent status negotiations, without restrictions of planning, zoning, home construction or communities.

Israel’s presence in the area is not illegal. This expert in international law affirmed that the “oft-used term in the UN resolutions ‘occupied Palestinian territories’ has no legal basis or validity whatsoever.” The Palestinian leadership was to settle all outstanding issues (borders, settlements, security, Jerusalem and refugees) by negotiation only; their calls for preconditions or settlement freezes are in violation of the agreements.

When Israel took control of the area in 1967, as a result of its defensive war against the attacking Arabs, the Kingdom of Jordan did not have prior legal sovereignty and has since officially renounced such rights. When Israel became the administering power, she chose to implement the humanitarian provisions of the Geneva Convention to ensure basic day-to-day rights of the local populace as well as to protect her own forces. There are no special laws that apply to Israelis’ choosing to reside in Judea and Samaria; therefore, “settlement” activity does not violate international law. No legal instrument has ever determined that the Palestinians had or have sovereignty over them. Judea and Samaria remain in dispute between Israel and the Palestinians, subject only to the outcome of permanent status negotiations between the two parties.

These “settlements,” incidentally, are not rag-tag collections of huts, but fully functioning communities with public services such as transport, schools, shops, and libraries.

Any Palestinian attempt to unilaterally change the status of the territory would violate Palestinian commitments set out in the Oslo Accords and prejudice the integrity and continued validity of the various agreements with Israel, thereby opening up possible unilateral action by Israel.

After the election of President Donald Trump, the publisher and executive editor of the Times attempted an unprecedented outreach to their diminishing readership, professing a rededication to honest reporting. Disappointingly, they followed with a promise for the same fairness, same level of scrutiny, and the same corruption of facts; and they continue to summarily award the land to Palestinians. Despite the verification, The New York Times recently informed CAMERA that their reporters do not like and will not use the term “disputed.”

A light-rail system leads to trial in Versailles 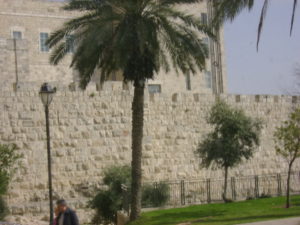 Jerusalem, ancient capital of Israel. Along this street two French companies built a light-rail system. That system led to the recent verdict in Versailles. Photo by CNAV, April 2011.

Now, the Palestinians are exploring new tactics to delegitimize Israel. They brought suit in France against two French companies that were building a light rail system in Israel, but their efforts were to seriously backfire.

The bid took place in the 1990s, the rail was completed in 2011, and the system crossed Jerusalem to the east side into “occupied territories.” Following the completion, the PLO filed a complaint that the tram construction was illegal since the UN, EU and many NGOs and governments consider Israel as illegally occupying Palestinian territories. The lawsuit was built upon a lie and serves as a perfect example of the power of words to falsify reality.

International legislation had to (1) establish whether the light rail construction was legal, (2) seek texts of international law, and (3) examine international treaties, in order to establish the respective rights of Palestinians and Israelis. This was the first time that an independent, non-Israeli court would examine the legal status of the West Bank (Judea and Samaria). Although this would not affect international law, it would clarify the legal reality.

The Versailles Court of Appeals considered all arguments on both sides, and concluded that propaganda (such as the PLO’s assessment) is not international law, that humanitarian law (conjured by the Palestinians) was not violated, and that the Palestinians have no rights, in the international legal sense, to the region, unlike Israel, who is legitimately entitled to occupy all the land beyond the ’67 line. Inasmuch as Israel has real rights to the territories, its decision to build a light rail or anything else in that area is legal, and the judges rejected all arguments presented by the Palestinians. The Court of Appeals sentenced the PLO (and Association France Palestine Solidarité AFPS (co-appellant) to pay 30,000 euros ($32,000) to each of the two construction companies.

In an historical trial carefully forgotten by the media, the 3rd Chamber of the Court of Appeal of Versailles declared that Israel is the legal occupant of the West Bank. Not surprisingly, The New York Times did not report this story on their respected pages.