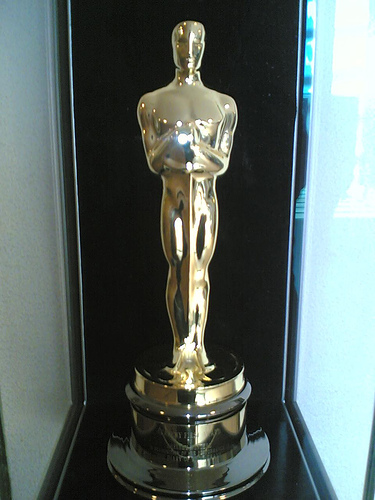 So Trita Parsi, head of the National Iranian-American Council, wants the Academy to cancel its annual Awards show, the Oscars. Maybe if he knew the origin of the Oscar statuette, he would have boycotted it long before this. And maybe the Oscars shouldn’t go on, anyway. But not for the reasons Mr. Parsi says.

From BizPac Review, we now learn that Iranian film director Asghar Farhadi might not attend the Oscars this year. Why would he want to attend? Because his fellow directors nominated him for Best Foreign-Language Film. He made a picture with the title The Salesman (2016).1 Why might he not attend? Because President Donald J. Trump signed an executive order to implement an Obama-era law restricting travel from seven Muslim countries. One of these: the Islamic Republic of Iran. And how restricting? Simply this: no one who resides in any of these countries, or visited them these last five years, may enter the United States without a visa.

No one seems to have asked whether Asghar Farhadi would simply apply for a visa to put the restriction out of the way. Surely no one asked whether the Customs and Immigration Enforcement Bureau would grant the visa anyway. (After all, this is the Oscars show we’re talking about!) Instead Mr. Parsi and his interlocutors assumed Trump would keep Mr. Farhadi out.

Confirmed: Iran's Asghar Farhadi won't be let into the US to attend Oscar's. He's nominated for best foreign language film…#MuslimBan

omg are you serious? Wowwww I sure hope those who voted for asshole Trump realize what they have done

Travesty. Narrow-minded ignorance. / As the sign read at the #WomensMarchOnWashington All DT's wives were immigrants.

Except: Marla Maples is a native of Georgia. In any event, Donald Trump never married a terrorist.

Oscars should not be held in show of solidarity.

Where did the Oscars come from?

That is, where did those statuettes come from? Messrs. Parsi and Farhadi likely do not know. The Academy of Motion Picture Arts and Sciences designed their statuette as a generic Crusader knight. He holds his broadsword, point down, with both hands on the hilt. The figurine thus stands for excellence in the art of cinema as theater—and for honor. The knight stands on a five-spoked wheel standing for the five parts of filmmaking: writing, directing, acting, production, and technical.

Legend has Margaret Herrick, then the librarian for the Academy, observing that the Crusader knight reminded her of her uncle Oscar. Another legend has Sidney Skolsky giving the statuette a common name to take its winners down several pegs. No one actually knows how the Oscars got their name. In 1939 the Academy made that name official.

As may be: does any Muslim even realize that the Academy Award of Merit resembles, by design, a Crusader knight? One must surely wonder.

Would we miss the Oscars?

For eighty-five years the Academy have handed out the Oscars. The early years, but especially 1934 through 1960, constitute the Golden Age of Hollywood. In that year the Hays Office, or the Production Code Administration, determined to enforce the Motion Picture Production Code in earnest. That Code told producers how they may not sell tickets—with anything prurient or wastefully violent. So they could sell tickets with only one thing: talent. And by all accounts, Hollywood drew talent.

Furthermore, a film might sweep the Oscars in several categories—in acting, directing, and producing, if not necessarily in writing or technique. Ben-Hur (1959) held the record for the most Academy Awards for a single project until 2004.2 More to the point: the Academy honored a producer, director, actor, or whatever, even by nominating him or her for an Oscar.

Today the Hays Office no longer functions. It hasn’t roughly since Alfred Hitchcock’s Psycho (1960) made a sick joke of the Code. After the death of Sir Alfred Hitchcock KBE, filmmaking declined in talent—slowly at first, then precipitously. Rarely does anyone make a film worth watching today.

Modern audiences know this. No longer do they flock to the cinemas for the latest release. Many prefer to wait for the movies to release to the Internet stream. Furthermore, the classics of the Golden Age compete today with modern films for viewers’ attention. The modern films do not compete effectively.

Who watches the Oscars?

So who even watches the Oscars today? The nominees, obviously, will attend. Those having a political stake in film will obviously pay attention. Which means: liberals. Conservatives, by contrast, have written off the Oscars. Why? Because today the Academy Award for Merit stands for nothing but political favor. The technical side of filmmaking might stay the exception. But Hollywood today most strongly resembles the Ministry of Information for the old Soviet Union. Someone ought to tell the Academy the Soviet Union ceased to function more than twenty years ago.

Your editor now presents a tentative motion picture treatment for a film Hollywood will likely never make. But maybe someday a conservative will make it. He can use some of the old-line techniques, including the stop-motion animation technique of Ray Harryhausen.

Imagine the Oscars show beginning as it usually does. Imagine Meryl Streep making her usual jenny-asinine comments. Of course she and her cohorts, in their tuxedos and evening gowns, will talk about everything but their craft.

Now imagine a little quiver that at first no one notices. Actually, several quivers. See those golden statuettes suddenly forming eyes, ears, noses, and mouths. They now sport far richer detail than their maker ever gave them.

And then they step off those five-spoked wheels, raise their broadswords, and advance on the stage in a body! In a coordinated attack worthy of King Richard the Lionhearted, they chase those over-dressed celebrities off the stage! Then seemingly from nowhere, they drag miniature medieval trebuchets onto the stage and use them to launch M-80 “cherry bombs” into the audience! If that does not satisfy, they drag in Roman candles and Marco Polo-style rocket launchers to launch bottle rockets.

When the last overdressed attendee has scampered away, but with the TV and Internet cameras trained on them, Grand Oscar climbs a siege ladder to mount the podium. In a cold, implacable voice, he speaks for all the rebellious Oscars. He informs the world that no writer, director, actor, producer, or technician in film today deserves any Award for Merit. He finds no merit in anything they do, or the way they do it. So now the Oscars say a simple thing: they are on strike! And they will not return to “work,” will not adorn anyone’s shelves, until someone shows merit in filmmaking again. They demand this sign of goodwill: the production companies must reinstate the Hays Office.

The obvious attempt to “recapture” the venue comes to nothing. The Oscars simply scatter. They then make clear they will not even allow further productions to continue.

The title of this hypothetical film should be just as obvious: The Day the Oscars Revolted.

True enough, that’s fantasy. Your editor will even apologize to Stephen King, as well as to the late Ray Harryhausen. But reality can devastate just as well as a fantasy like this.

Suppose, then, the Academy decides Asghar Farhadi “shouldn’t have to” apply for a visa for a short stay. Suppose the Academy cancels the Oscars show merely for this reason.

Does the Academy imagine that, outside of Megalopolis USA, the Los Angeles-San Francisco chain, Portland, Oregon, and Seattle, Washington, anyone would even care? How much sympathy do they really expect to get, whether for Asghar Farhadi or for anyone else who refuses to apply for a visa?

What will happen to their viewership then? They may never get it back. Ironically, several actors have called for Hollywood itself to go on general strike. Let them! Americans still would have their streaming channels and classic movies.

Besides: the greatest motion picture of all time is in production as your editor writes this. That production has the most electrifying starring and supporting cast, and the most extras, in history. Set dressers and other technicians are now working overtime, where they had no work before. This project is going forward without the blessing of the usual Hollywood “angel” (read: demon) financiers. (And also without and despite their real-life counterpart, George Soros.)

1In case anyone wants to know: in The Salesman, the actors portraying Mr. and Mrs. Willy Loman (Death of a Salesman by Arthur Miller) fall out with one another during rehearsal.

2The Lord of the Rings: The Return of the King (2003) won eleven Oscars, the same number Ben-Hur won.