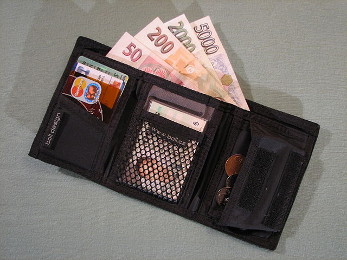 What does that phrase to vote with your wallet mean? It can mean trading only with people who share your values. But sometimes it means changing your life, to “vote” for a change in the roots of society.

Why vote with your wallet?

To vote with your wallet, is more important than you would normally think. Trade, including “shopping,” involves more than an exchange of value for value. When you trade with someone, you validate him. You tell the world he deserves your custom, and you will vouch for him.

Those who presume to tell the world what to think, often tell you to separate matters of “personal character” from the transaction at hand. Such people notoriously applied that maxim to Bill Clinton while he served as President. Behold the results! From the day of his leaving office to this, he and his family built a continuing criminal enterprise they called “The Clinton Foundation.” That “Foundation” sold access, by turns, to the United States Senate and Department of State. In its last year it received millions on the premise it would have access to the Presidency to sell. Only the defeat of Hillary Clinton by Donald J. Trump stopped that “Foundation” from taking over the United States government. Today, of course, the Clinton Foundation have lost their income. The Clintons must now liquidate many of its functions—because the Foundation was never as charitable as it pretended.

That should show you how important it really is to vote with your wallet.

An obvious way to vote with your wallet

The most obvious way to vote with your wallet, involves two vendors who each want to sell you a product. The type of product might have nothing wrong with it, in principle. The competing products might be identical—or not. They might carry the same price—or not. Which do you choose?

Well, say one vendor plays politically correct games with its personnel—excuse me—“human resource” policies, and the other doesn’t. One vendor recognizes same-sex roommates sharing bed as “married.” They treat such people the same as—or better than—they treat real married people. I speak here, not of common etiquette, but of expenditure. Ask anyone who runs a business or knows someone who does. It costs money to play that kind of game. That money effectively comes out of the pockets of real married people. Which means they steal from the moral to give to the immoral.

It can get worse than that. Are you going to visit a store when you can’t even be sure you’re sharing a restroom with a man or a woman? Would you trust your little child in such a restroom?

One store chain actually expected their customers to play at that kind of craps table. You know the chain. You know what the customers did about it. They voted with their wallets, all right. At last report that chain is still hurting.

Sometimes to vote with your wallet means to do something positive. The Hobby Lobby chain of arts-and-crafts stores stays closed on Sunday. They do not play politically correct games with their personnel policies. Specifically, they refused to make all their employees pay for “birth control” only some of their employees would use. (And don’t let anyone tell you all the women would use “birth control” merely because they were women. Not all of them live the kind of lives that “need” birth control. They’re not like Sandra Fluke—Liver Fluke—whatever she calls herself.)

Well, the then-current administration took them to court. When they did that, right-thinking pastors—including mine—and their wives called on moral people everywhere. “Do your shopping at Hobby Lobby!” they said. “Let them know you support their values, not the government’s values.” So while the immoral voted with the legal buzzards, customers voted with their wallets. Hobby Lobby won in court. But they also won the hearts and minds of their customers.

When it’s harder to vote with your wallet

To vote with your wallet, is not always easy. It might mean paying more for a product than you otherwise would. So you have to ask yourself how much your values are worth to you. They don’t teach you that in Econ 101, do they?

It might also mean doing without that product entirely. When that happens, you should take time to ask how you came to depend on that product. Dependency can be just as strong a chain as the real thing.

This can apply to a country as well as to you personally. When you forget how to make a thing yourself, you depend on someone else to make that thing. You might not want to trade with that someone else, for the reasons we’ve been discussing or for other reasons.

Again, it can get worse. Sometimes you live your life thinking you “need” that product. Then you learn not only do you not need it; you shouldn’t even want it. What do you do when you find out the product you’ve been using, has been poisoning you all this time? Of course you stop using it. Then you start wondering about other products of that kind. You wonder about the vendor(s) who sold you, not just their version of the products but the notion of using them. Can you ever trust them again? I say not. Not in that context or in any other context. When a vendor lies to you, anything he makes or does becomes suspect.

This also goes to the value of the best kind of campaign-finance reform: full disclosure. How would that work? You’ve heard the disclaimers in campaign advertisements today. “I am Candidate X, and I approved this message.” Now imagine another disclaimer: “Candidate X is brought to you by Monsanto.” Or, “Candidate X is brought to you by Archer-Daniels-Midland, Supermarket to the World.” Mightn’t that make you take a closer look at the practices of the Monsantos and the Archer-Danielses of the world?

In fact, how do you think Donald J. Trump became President of the United States? He encouraged Americans to vote with their wallets! When he said, “I am Donald J. Trump, and I approved this message,” he meant it. More than that, he meant, “I approved this message, and no one else.” And with his money and star power, he backed it up. No one—ever—found any reason to doubt him on this. And that wasn’t because no one tried. Those who did try to buy the Presidency and the government, went down before this simple fact.

So yes, indeed, vote with your wallet! You might sometimes have to vote with more than your wallet. Such is the price of life, liberty and the pursuit of happiness. Thomas Jefferson, and those who co-signed his most famous letter understood this. They voted with their “lives, [their] fortunes, and [their] sacred honor.” We can at least vote with our wallets, to remember these men who enabled us to do it.