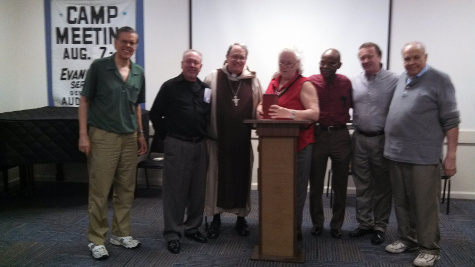 The infamous Johnson Amendment, that curtails political speech by churches, remains on the books. So also does Obamacare, at least for now. (The “replacement” that passed the House yesterday might roll back some of its worst excesses. But it will do so only if the Senate passes it.) One executive order, or even a slew of them, will not change this. Either Congress or the courts must address these bad laws directly.

In 1954, then-Senator Lyndon Baines Johnson had a problem. At least some Americans alive today, remember him for the crude, blustering, and dishonest man he was. The churches knew it, too. So many pastors openly, from their pulpits, passed judgment on him as a Senator and a “public servant.”

Furious, Johnson wrote his Amendment to a budget bill. It defined a new class of “public charity” that not only would pay no taxes, but could accept tax-deductible donations. Today we know that part of the law as 26 USC Section 501(c)(3). The Johnson Amendment treats all churches as public charities under this section.

Public charities may not engage in political activity. Usually this means they may not endorse or condemn candidates for elective office. But the Internal Revenue Service, under the Obama administration, interpreted it even more harshly. Any church that uttered one peep about issues of political controversy risked losing its privileges under 26 USC Section 501(c)(3).

Lyndon Johnson did enough damage. But at least he did so to serve himself personally. So he stayed in the Senate, then became Vice-President under John F. Kennedy. (Did he engineer the assassination of Kennedy to advance to the top job? At least one scholar of twentieth-century history so accuses.) Barack Obama had a worse motive. He wanted the churches to water down their faith, and Christians everywhere to keep their opinions to themselves. If he could have, he would have signed an executive order to stop Christians from voting. (Hillary Clinton, along with Margaret Atwood of Handmaid’s Tale fame, likely want to do just that.)

CNAV has, of course, treated this issue before. Likewise we have treated an earlier “Atwoodian” measure in Houston, Texas, that should have awakened people.

Of the myriad Constitutional breaches of Obamacare, others have written extensively, even on this site. Among those breaches: it forces people to deliver certain classes of goods and services. Some of these—like contraceptive services—violate Christian and other religious precepts. (The architects of Obamacare wanted to force doctors to do abortions on demand, and insurers to pay for this. And they wept when negotiations to include such measures, failed.) The Little Sisters of the Poor became an example by challenging these policies. They lost in a lower court. That any judge would order a thing like this, speaks volumes.

The Supreme Court vacated that order and “suggested” a settlement. David French at National Review gave details. In brief, the Court held (per curiam, no less) that insurers still would have to cover birth control pills. But the Little Sisters need not tell people this. French seemed to think that should satisfy. It doesn’t.

The Hobby Lobby arts-and-crafts chain fared better, of course. The founding family owns the company. So the government must respect their freedom of conscience. But the law does not similarly protect the management, or shareholders, of joint-stock corporations. This holds especially when the public trade the shares. Can anyone wonder why joint-stock corporate managers and directors behave as though they had no conscience? The law puts conscienceless people into positions of management. A manager has nothing to gain, and everything to lose, by having a conscience.

So Monsanto can freely poison people, albeit slowly, with glyphosphate (RoundUp®). But A. C. Moore, competitors to Hobby Lobby, may not moderate the offering of services that violate any Christian’s conscience. Why not? Because they are a Subchapter C corporation, not a family enterprise. (Take no comfort from the “wishes and desires of the employees.” Hippocrates of Cos, in writing an oath of physicians’ service, included this point: I will give no deadly medicine to anyone, [even] if [that someone asks], nor suggest any such counsel.)

What the new Executive Order does

Yesterday, on the National Day of Prayer, President Donald J. Trump signed a new Executive Order. This Order has six sections. Of these, Sections 2, 3, and 4 speak the most to the issue. Section 2 rolls back the Obama-era IRS interpretation of the Johnson Amendment. Tellingly, the Order still forbids a church to endorse or condemn a candidate. A church may only “speak…about moral or political issues from a religious perspective.”

Section 3 sets at naught the “compromise” to which Little Sisters of the Poor agreed. Perhaps. Trump asks three different Cabinet officers to consider issuing some new regulations. (It quotes the relevant section of the law: 42 USC Section 300gg-13(a)(4).)

…and what it does not

This Executive Order does not actually repeal the Johnson Amendment, or Obamacare. A cleric, warden, or similar officer still may not endorse or condemn a candidate. At least, he may not do so in his official capacity. Whether he may do so as a private citizen has not undergone a court test. Neither has the Johnson Amendment itself.

Similarly, certain executive agencies, having quasi-legislative and quasi-judicial powers, remain. That alone breaks the Constitution. Any regulations anyone makes, or considers making, a successor can unmake. Indeed President Trump has achieved the most in office thus far by unmaking Barack Obama’s executive orders. CNAV commends him for doing this. But a President (Elizabeth) Warren, or a President (Hillary) Clinton (who wants a rematch!), or a President Atwood, can undo all that Trump has done.

For fifty-two minutes he spoke boldly on moral and political issues and related each to the Bible. He did this even as the IRS proposed to take away his (and any other cleric’s) housing allowance. So if any pastor ever qualified to speak with hard realism about this executive order, he did. Accordingly, CNAV reached him by telephone yesterday evening, to share Trump’s executive order with him. He gave this warning:

President Trump did nothing to repeal the actual law. He merely promised not to enforce that law as Obama enforced it. We can be properly grateful to God for bringing about such relief—as long as it lasts. But the law remains. And a successive administration, or even a shift in this one, can bring that enforcement back with full force.

We appreciate the spirit of today’s gesture. [But] vague instructions to federal agencies simply leave them wiggle room to ignore that gesture.

Dr. Jerry Johnson of National Religious Broadcasters saw the EO as “a first step.” It surely is an immediate step. In taking it, Trump repeated a signal he sent during the campaign. He mentioned the Johnson Amendment by name and promised its repeal.

But no President can repeal a law. Drs. Brown and Johnson, and Lawyer Farris, all know this. If these three reports give any indication, many have forgotten this.

What to do about the Johnson Amendment

A President, by himself, cannot “give churches their political voice back.” Congress passed the Johnson Amendment. Congress passed Obamacare. And Congress can repeal both. As they should.

And if they don’t? The John Birch Society have suggested that State legislatures can nullify unconstitutional federal laws within their borders. Their theory: a law that breaks the Constitution is not “in pursuance” of that Constitution. Therefore Article VI Section 2, “The Supremacy Clause,” cannot apply.

The Hobby Lobby founding family managed to win back some of their freedom. But the Johnson Amendment needs a more direct challenge. First let someone run for office which a Pastor Brown would gladly endorse. (Dr. Brown hinted to CNAV that few if any modern politicians would even deserve such an endorsement.) Then let a number of pastors actually endorse him. The IRS would send their auditors in. (One America News reported today that only one church has ever lost its public-charity privileges under that Amendment.) Then the pastors would seek redress in the courts. They would cite their absolute right to endorse or condemn candidates from the pulpit.

Congress shall make no law…prohibiting the free exercise [of religion].

The Constitution couldn’t be any clearer. (By the way: the IRS have always applied the Johnson Amendment selectively. That alone should weaken their case.)

While this is happening, let State legislatures follow the advice of the John Birch Society. They should stop “applying” to Congress “to call a convention for proposing amendments.” Let them instead nullify Obamacare and similar laws within their borders. Quasi-legislative and quasi-judicial agencies break the Constitution in ways that go beyond prohibitions on free exercise of religion. That alone gives reason enough to “nullify” them out of power.

That’s how to get rid of unconstitutional laws. Executive orders won’t do this.