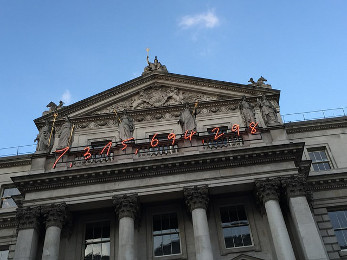 The word globalism is often used in its narrowest context to mean global trade. This use obscures its broader political intention to internationalize nation states and ultimately impose one-world government.

Similarly the word Islamism is often used in its narrowest context to mean a religion like any other. But that obscures its broader political intention to reestablish the caliphate and impose sharia law worldwide.

Both are supremacist, expansionist socio-political movements intent on world dominion.

Islamists like Globalists believe themselves and their supremacist tenets to be morally superior to all others. The Islamist cloaks his supremacy in religious fervor and the disingenuous conviction that Islam is a “peaceful” religion. But peace to an Islamist means when all the world is Muslim.

The Globalist cloaks his supremacy in a parallel and equally disingenuous conviction that Globalism is a “tolerant” movement. But tolerance to a globalist means tolerating those who look different, not those who think differently.

Both systems are tyrannical in their demand for absolute conformity to their proscribed rules of behavior. For Islamists it is religious sharia law. For globalists it is secular political correctness.

Islamism and Globalism appear to exist on opposite sides of the political spectrum. But they share a common enemy – the nation-state. Nationalism is the single greatest obstacle to the religious caliphate of Islamism and to the secular one-world government of Globalism. The ancient proverb “The enemy of my enemy is my friend” explains the counter-intuitive common cause and intersectional alliance between Islamists and Globalists today.

Disinformation is a deliberate tactic of war. The Islamist fiction that the annihilation of Israel will bring peace to the middle east is a unifying disinformation tactic of war. Islamists seek to demonize Israel, manipulate public opinion, and garner intersectional support from left-wing liberal lemmings against Israel. Islamist disinformation has a name – taqiyya – lying in the service of Islam. It is a deceitful strategy. And it deflects attention from the Islamist end game of eliminating all infidels including the gullible left-wing liberal infidels who support them.

Similarly, the disinformation campaign supporting the fiction that Socialism will bring justice to the United States also has a name – alinskiyya – lying in the service of Socialism. The hippies and anarchists of the 60’s did not go quietly into the night. They have reconstituted themselves as the professors, administrators, politicians, activist judges, and policy-makers adhering to well-defined Tavistock Institute principles of social engineering and mass indoctrination designed to disinform, destabilize, and destroy America from within. Whoever controls the information controls society – and whoever controls the educational curriculum controls the future.

The same rules for radicals

Islamists and Globalists follow the same expansionist playbook codified by Saul Alinsky in his 1971 book Rules for Radicals, Rule #12:

Pick the target, freeze it, personalize it, polarize it. Don’t try to attack abstract corporations or bureaucracies. Identify a responsible individual. Ignore attempts to shift or spread the blame.

Israel and America have been demonized, targeted, personalized, and polarized because both are unapologetic and unwavering in their commitments to their national sovereignty. The war against Israel and America is a war against nationalism. Israel’s right to exist as a sovereign Jewish state is actually under debate. So also is America’s right to exist as a sovereign democratic nation. The left-wing liberal narrative courtesy of Barack Hussein Obama has reformatted American education and American entertainment. Now they reflect the dreams from his father – a Kenyan radical socialist who considered America an evil colonial power. The information war waged by the colluding mainstream media, academia, and the entertainment industry foments American self-loathing, demonizes President Donald Trump the symbol of America-first nationalism, glorifies socialism and anti-Semitism, and presents internationalism as the panacea that will bring “social justice” to the masses.

Socialism has never worked in the long-run in any country in the world because as Margaret Thatcher pointed out “Eventually you run out of other people’s money.” Socialism has only had limited success in the short-run in very small homogenous populations because socialism and pluralism are antithetical to each other. Socialism’s greatest success is in destroying a nation’s prosperity and in sacrificing individual citizen’s rights to government control. Ayn Rand explains that socialism even robs an individual of his right to exist:

Socialism is the doctrine that man has no right to exist for his own sake, that his life and his work do not belong to him, but belong to society, that the only justification of his existence is his service to society, and that society may dispose of him in any way it pleases for the sake of whatever it deems to be its own tribal, collective good.

A design for dependency

The essential question is why the Left is promoting communist values. The left-wing liberal agenda seeks to destroy the socio-political capitalist infrastructure of American democracy and transform it into a dependent socialist state with cradle to grave control by the government. Their strategy is to destroy the traditional American institutions of family, religion, and education that promote independence, adulthood, individualism, and ego strength – all the qualities that made America great.

The entire narrative of the Left is designed to induce regression through educational indoctrination and the media. As Hillary Clinton famously remarked, they need “an unaware compliant public.” Unaware and compliant are the hallmarks of childhood. The sales pitch might sound good to a childish mind who is seduced by candy from a stranger. But the adult mind understands the sinister end-game. Once the public is entirely dependent on the government they lose all individual rights and national sovereignty. Then the newly socialized state is poised to become part of an internationalized one-world government. That is the long-game of the globalist elite and the motivation for indoctrinating America toward socialism.

The left support their own would-be destroyers

The problem is the left-wing liberal lemmings are too arrogant to understand they are participating in their own destruction. Indeed they are just the useful idiots. The Left have successfully indoctrinated themselves to believe they are fighting for social justice. But in fact they are helping to establish the dystopian nightmare of one-world government. Then they will have no middle class, no upward mobility, no national sovereignty, and absolutely no individual freedoms. Instead they will have only the master ruling elite and the enslaved population who service them.

The left-wing liberal lemmings should take a break from marching and “resisting.” Let them start reading Bertrand Russell’s The Impact of Science on Society written in 1952. They will learn that the globalists elites wrote their script 65 years ago. Those elites dreamed of their own one-world government – a binary socio-political system of masters and slaves. The globalist elite’s New World Order is antithetical to social justice. It is the elite’s self-serving answer to the Malthusian problem of the earth not having enough resources to sustain the population growth.

Tavistock Institute came to America after WWII with the specific purpose of indoctrinating Americans via education and the media. They particularly used television – the greatest vehicle for mass social engineering ever invented. The Hollywood glitterati and the protesting hordes should take a pause. Because they must understand that the New World Order has no place for them. They are simply useful idiots whom the elite will destroy. The aristocratic Lord Bertrand Russell and the late David Rockefeller had no moral problem with eliminating the useless eaters anymore than Hitler had with exterminating Jews, Islamists with slaughtering infidels, or the Chinese Emperors with burying their concubines alive to service them in the afterlife.