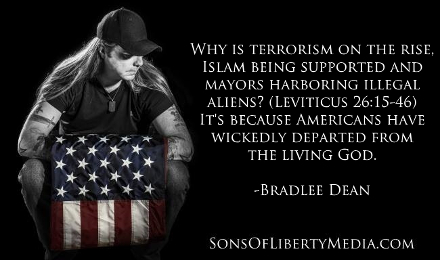 “America will never be destroyed from the outside. If we falter and lose our freedoms, it will be because we destroyed ourselves.” So said Abraham Lincoln. Now surely you have noticed that since September 11, 2001, the so-called representatives of “We the people” have been acting out in favor of doing for America’s sworn enemies, what the enemy could not have dreamed of doing on their own. So this begs the question, who is the enemy?

A dangerous ambition more often lurks behind the specious mask of zeal for the rights of the people, than under the forbidding appearance of zeal for the firmness and efficiency of government. …  History will teach us, that the former has been found a much more certain road to the introduction of despotism, than the latter. – Alexander Hamilton

A nation can survive its fools, and even the ambitious. But it cannot survive treason from within. An enemy at the gates is less formidable, for he is known and carries his banner openly. But the traitor moves amongst those within the gate freely, his sly whispers rustling through all the alleys, heard in the very halls of government itself. For the traitor appears not a traitor; he speaks in accents familiar to his victims, and he wears their face and their arguments, he appeals to the baseness that lies deep in the hearts of all men. He rots the soul of a nation, he works secretly and unknown in the night to undermine the pillars of the city, he infects the body politic so that it can no longer resist. A murderer is less to fear. The traitor is the plague. Marcus Tullius Cicero

Sympathy for the external enemy

On May 5, 2017, I wrote that there were felons across the country that are masquerading as mayors. These felons are defying the laws of America by alluring illegals that mean to destroy America into their perspective cities by harboring them from prosecution according to law. Why would they do the unthinkable? (Luke 22:48) This is treason (Article 3, Section 3 of the US Constitution).

After the Manchester, England jihad bombing at the Ariana Grande concert last week, we saw people in the UK who began to wake up to the fact that in Birmingham, England the mayor just happens to be a Muslim. Additionally, Lutton, Blackburn, Oxford, Oldham, Rochdale, Leeds, and in London the mayors all happen to be Muslims.

As a matter of fact, the mayor of London, holding a sign in his hand that read “Refugee’s Welcome” said, “Terror attacks are a part of ‘Urban life’” (Deuteronomy 28:43). This is not happening in some dark corner of the globe. This is happening in the light of day for all the world to see and hear.

In Germany, Angela Merkel, 2015 Time’s Person of the Year (Adolph Hitler – 1938 “Man of the Year,” Joseph Stalin – 1939 and 1942 “Man of the Year” (Luke 16:15)) who once slapped the German flag and stated that Germany belongs to Islam, said that the reason for the jihadi bombing in Manchester was not the fault of the Muslim who chose to commit the crime, it was the fault of Christians for Islamaphobia (Matthew 10:16-23). Not one thing was said in support of the victims.

In Canada, sodomite and Allah-worshipping Prime Minister Justin Trudeau made an appeal to the Muslims in a show of support for Islam. Not one word was said in support of the victims.

You might say, how foolish can those people be? Well, let me ask you? America, you have mayors in America alluring illegal aliens into this country under the guise of helping them as poor victims. They have been used to plunder other countries and now they are doing it with your taxpayer dollars in your own country.

After the blast in England, Minneapolis Mayor Betsy Hodges gave a speech from a mosque (1 Timothy 4:1) and showing her unwavering support for the Muslim communities.

Keep in mind Americans, these are those behind these “useful idiots” who have sold their souls who are working for those who have labeled you the “terrorists.”

It’s because Americans have wickedly departed from the living God.

Gradualism, the tortoise, and the hare

Why do you quote Abraham Lincoln as if he were a pillar of truth and honor? He is the one who gave us Big Government by invading the South under the pretense of freeing the slaves. SLAVERY WAS CONSTITUTIONAL. All of the colonies entered the Union KNOWING that it was a protected institution. Lincoln pulled off a military coup and put the Executive branch of government over the other two branches, thus destroying the checks and balances that defined us as a confederation of “Nation-States”. The “Southern Confederacy” restored what Lincoln destroyed! After Lincoln’s victorious, evil coup, we have been afflicted by a “top-down” autocratic, re-distributionist socialist government bearing little resemblance to the one that our founders gave us. We used to have local, state and local sovereign nation-states with bottom-up authority in which the 3 federal branches were designed to serve the states. Now, thanks to Lincoln, we all work on Uncle Sam’s plantation. Most of you don’t know the real Lincoln who actively promoted the Corwin amendment, which would have amended the constitution and made slavery PERMANENT. He told Jefferson Davis, “keep your slaves, but come back into the Union”. All Lincoln did was to convert physical slavery into political repression for the blacks, which continues to this day. But, now, we are all under bondage to policies formulated by the inheritors of Lincoln’s tyranny_ the Democrat Party, essentially a communist organization. Thanks a lot Mr. Lincoln!