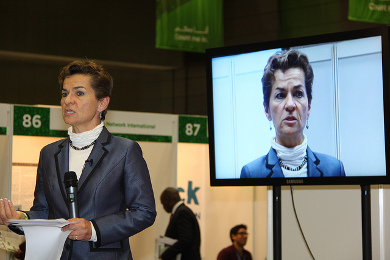 It will happen without warning. As you drive along a street, road, or highway, your engine will die. So will every engine of every car or truck on the road at the time. Two pointed exceptional types will exist: police or military vehicles, and vehicles antedating the typical remote-stop anti-theft systems of today. (Cars of the latter type will get only so far as a roadblock perhaps 500 feet or so away.) Perhaps you will now wonder whether this was what that UN official told everyone to expect in her radio address to the world. What was her name? Ah, yes: Christiana Figueres, Executive Secretary to the..what? Oh, yes: United Nations Framework Convention for Climate Change. You will suddenly realize that jaw-breaking name stands for a concept now about to get right into your face.

A white vehicle with baby-blue trim will pull up behind you—a Zed Wagon.1 Out will step a burly, jackboot-wearing, no-nonsense soldier in a white uniform with a baby blue helmet. He will carry a rifle at port arms. His chest will bear the designator of his service: UNCliFor, the United Nations Climate Force. He will then walk up to your window. “Out,” he will bark. If you protest, he then will cock and level his rifle at you. “Out of the [fornicating] car,” he’ll say, “or I’ll blow your [fornicating] head off and drag you out!” You will then get out—one way or the other.

Then the Zed Wagon (having very powerful electric motors) will pull alongside. A double crane will lower a carrying frame over your car. A crew of three will then dismount and rig beams and chains under your car, and attach it to the carrying frame. The Z-form double crane will then lift your car off the tarmac and onto the cargo bed. Finally the crew will get into the Zed Wagon and drive away—with your car, leaving you standing where you stopped.

Unless you can get safely to a place of lodging by sundown, UNCliFor will pick you up for violating curfew. Wherever you do manage to lodge, there you will stay overnight. Christiana Figueres will likely appear on television (or the Internet Stream) to announce the new Global Emergency Decree Against Climate Change.

Does anyone reading this, doubt this could happen? Let them think again. Christiana Figueres, and five other UN-worthies, published their manifesto only yesterday in the journal Nature. Two weeks earlier, Eliot Diringer, executive vice-president of the Center for Climate and Energy Solutions, published this challenge to President Donald Trump. Actually, Mr. Diringer’s challenge sounded more like a petulant whine than a serious statement.

Look again at the Christiana Figueres essay. It gives this “warning”:

Should emissions continue to rise beyond 2020, or even remain level, the temperature goals set in Paris become almost unattainable. The UN Sustainable Development Goals that were agreed in 2015 would also be at grave risk.

Translation: everyone’s use of motorcars, most aircraft, steel, and other “carbon emitters,” is cooking the planet. Within three years, says this overwrought report, the earth will pass beyond all help. Temperatures will rise out of control, and the planet will die of global heatstroke.

So Christiana Figueres and her fellow dictator-wannabes, not willing to stay idle, created a new push group: Mission 2020. Incidentally they give the lie to those who blithely assure us that the Paris Agreement did not bind the United States. The very home page of Mission 2020 says it binds everyone.

Bending the curve of emissions by 2020 is the only way to limit global warming and ensure that the Sustainable Development Goals remain within our reach. It will also pave the way to delivering a just transition to net zero emissions by 2050.

Oh-ho-ho-ho. So now they speak of justice. Social justice, of course.

The Mission 2020 report and site speak of a dire emergency. Any ethical system defines emergency in some way. The late Ayn Rand defined it as an imminent threat to human life. To illustrate the power of this concept, Ayn Rand made one exception to her moral rule never to do for another what that other can do for himself. That exception involves this concept we call emergency.

Ladies and gentlemen, Christiana Figueres, in her op-ed in Nature, declared an emergency. Recall: within three years, the Earth will pass beyond all help. So this would make any, repeat any, means to “decarbonize the economy” (her phrase), reasonable.

The problem: Christiana Figueres lists no specific action she or her colleagues mean to take. She starts with a baleful prophecy. Then she lists six vague “milestones” she says the world must achieve in three years:

She concludes by demanding “100% renewable energy production.” But she says not a word about whether renewables would yield the same energy we use today, much less keep up with demand.

Ignoring the problem? Or leveraging it?

Renewables, as Christiana Figueres and others define them, have a limit one cannot exceed. The sun does not shine brightly enough, nor the wind blow hard enough, to replace fossil fuels today. Nor will this ever be the case. The very atmosphere limits the energy that reaches the earth from the sun. Winds that could possibly deliver a fraction of the energy from one coal-fired plant, would blow far too violently to “harvest.”

To assume that Christiana Figueres and her colleagues know this, is elementary games theory. So why does she even talk in these terms? Very simple: to justify a draconian takeover of the world’s polity and economy.

This same woman infamously said, at a news conference in Brussels, Belgium, earlier this year:

This is the first time in the history of mankind that we are setting ourselves the task of intentionally, within a defined period of time, to change the economic development model that has been reigning for at least 150 years, since the Industrial Revolution.

This is probably the most difficult task we have ever given ourselves, which is to intentionally transform the economic development model for the first time in human history.

And what is that economic development model? Capitalism.

Perhaps she was talking too much. She wrote this is a more guarded moment:

For humanity to survive and thrive, we need to forge a more inclusive, greener economy that moves beyond the narrow notion of wealth based on our current indicator of success: GDP. You can call it the green economy, ecological civilization, or inclusive capitalism but the concept is the same.

But that concept does not conform to capitalism. How can one include “social costs” and “value natural capital” (to quote her further) without vesting a property interest in these things? She has never shown a willingness to do this.

A challenge to Christiana Figueres

Herewith, then, a challenge to Christiana Figueres, her co-authors, the signers of her manifesto, and anyone else who thinks as they do:

First: pay some of the price you demand we pay. I refer here to your own carbon footprints, not to your private moneys. (How you came by those moneys goes beyond scope here but might bear investigating.) Why didn’t you “Skype” the Twenty-first Conference of Parties in Paris? If you are really serious about declaring an emergency, you must “Skype” your next Conference of Parties. (Or else rent a cluster of exclusive Internet servers to run OpenSim: the engine for Massively Multiplayer Online Role Playing Games. Make your next conference venue a virtual world.) More broadly, let’s see you ground your private jets, and scrap your chauffeured limousines, before you take our cars.

Second: tell us up-front what measures you plan to take and enforce. “We need to get to this or that place” will not suffice. Again, if you truly mean to declare such an emergency, propose your emergency measures openly and subject them to honest debate.

Let’s see if you have the ovarian fortitude to meet it.

1In the latter half of the twentieth century, the London Metropolitan Police developed the Zed Wagon to handle parking violators. Violators would park their cars so close to other cars that a conventional wrecker couldn’t remove them. Enter the Zed Wagon, which could pluck a car away from the curb (“kerb”) as easily as talking about it. The “Bobbies” named the Zed Wagon after the shape of its double crane. “Zed” is a phonetic respelling of how one pronounces the last letter of the alphabet in the Queen’s English. Eventually the Zed Wagon gave way to the Boot, or Clamp. But in this context, the UN Climate Force would seek to remove, not merely immobilize, your car.

2Oddly enough, the one part of this plan that would really benefit human beings, is returning to traditional farming. Food from traditional or “organic” farms has more nutrients. Such farms would also prove easier to manage.

[…] 1 See for instance the Climate Manifesto by this same Christiana Figueres, and how it would play out. […]

Asinine – the only word for Democrats | Conservative News and Views

[…] in the Middle Ages than today. They flatly deny this. And they continue to promote the dire Climate Manifesto, that has its basis in […]