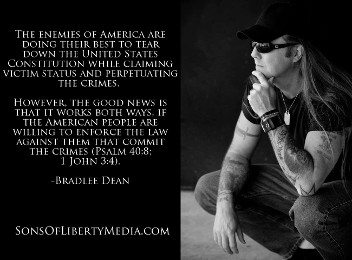 General Thomas Jonathan “Stonewall” Jackson famously advised, “Never take counsel from your fears.” That advice becomes more important than ever in an age of velvet-glove oppression.

Oppression through corrupt media and politics

On a daily basis, Americans are being inundated with oppression through a corrupt system of not only the media, but also corrupt politicians as well.

80 house members have been reported as communists.

Through it all, we see such unlawful and unconstitutional organizations like that of the American Civil Liberties Union, The Southern Poverty Law Center , Planned Parenthood, Homosexual organizations and bureaucracies such as the TSA, Homeland Security etc. surfacing throughout the country (Psalm 55:11; Amos 3:1-15) only to upend American sovereignty. While in the end, they are making war against God by advocating that which He clearly condemns (Micah 3:5).

It has been rightly said by William Booth,

If you want to change the future, then you are going to have to trouble the present.

It is a tactic that enemies of this country within and without are facilitating.

Accuse the other side of that which you are guilty. – Joseph Goebbels, Nazi propaganda minister

The enemies of America are doing their best to tear down the United States Constitution while claiming victim status and perpetuating the crimes.

Americans have the means to confront oppression, and their oppressors

However, the good news is that it works both ways, if the American people are willing to enforce the law against them that commit the crimes (Psalm 40:8; 1 John 3:4).

The strength of the Constitution (enumerated Laws) lies entirely in the determination of each citizen to defend it. Only if every single citizen feels duty bound to do his share in this defense are the constitutional rights secure. – Albert Einstein

America, there is no other side to the issue when it comes to America’s oppressors. There is the law abider or the Lawbreaker. Furthermore, America is a Constitutional Republic, ruled by law (Article 4, Section 4), not by the opinions of the criminals.

Wisdom from the Biblical Judges

When you go to Judges 3, you find:

Now these are the nations which the Lord left, to prove Israel by them, even as many of Israel as had not known all the wars of Canaan; Only that the generations of the children of Israel might know, to teach them war, at the least such as before knew nothing thereof; Namely, five lords of the Philistines, and all the Canaanites, and the Sidonians, and the Hivites that dwelt in mount Lebanon, from mount Baalhermon unto the entering in of Hamath.

If we fight, the Lord will stand with us.

When you look into the history of the patriarchs, you can see that the Lord is willing to give the church what it is willing to fight for! (1 Timothy 6:12) What an opportunity for us in this country to prove the God of Israel (Judges 2:22), who has not changed (Hebrews 13:8), that He might show Himself strong on our behalf once again (2 Chronicles 16:9).

Remember America, greater works will we do than Jesus did (John 14:12). The sooner you take Him at His word, the sooner we are going to see the God of Israel in Jesus Christ glorified. America has been a beacon of light to the world (Isaiah 51:4), and it is for us to keep it lit up. To those who understand “to bring the light you must endure the flame,” we have a job to do, and your enemy is scared to death of this revelation of truth in action (Matthew 16:17-19). Let’s set the record straight.

1Editor’s note: the word grove in the King James Version stands for an engraved totem pole. It does not stand for a stand of trees. Canaanites carved these “groves” to revere their fertility goddess, Asherah or Astarte. (Whence: Easter or Ishtar, the original name for the festival following the vernal equinox. The correct name for the Christian holiday is Resurrection Day.)