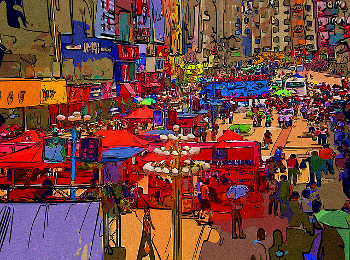 Capitalism is rapidly going out of fashion, especially among the young. That it is losing its grip on the West is confirmation that Western Civilization with all its advantages such as the rule of law and especially the ascendency of individual rights as opposed to state power, is in steep decline. That’s too bad, because virtually everything valuable built in the last 2000 years owes its existence to Western Civilization and along with it, capitalism.

Reason Magazine conducted a recent poll among those age 18-24. 58% of them said they view socialism favorably and capitalism unfavorably. But at the same time 64% said they favored the free market rather than government managed markets. Those opposing ideas show ignorance of both systems. I think it was F. Scott Fitzgerald who said,

In a separate study conducted by Harvard University 51% of the same age group said they did not like capitalism and 42% said they did like it. It was Mark Twain who said, “Don’t let schooling interfere with your education.” I would wager that most of those in the Harvard sample on both sides of the equation have dreams of a Wall Street job someday or at least dreams of working for one of the Fortune 500 companies. But, after many years of indoctrination by Marxist professors who could blame them for being confused?

These young people have all grown up in a world of ever-increasing state power and state control of everything. For at least 12 years, and for most of them much more than that, they have taken in relentless government propaganda at least 8 hours a day. The state has had control of these people far more than their parents even if their parents had the best of intentions. When not in direct state sponsored propaganda sessions young people today are under the relentless influence of peer groups through social media which shapes their lives. They are simply creatures of their programming.

In the truly free market, personal responsibility has not surrendered to the demand of universal rights and equality of outcome. There is no free child care, health care, college, or housing. Thus it is still necessary to save and work hard to succeed. The free market is admittedly very hard. It doesn’t care about your feelings, your ethnicity or your gender identity. It provides no safe spaces or trigger warnings it is in fact the opposite of those things.

The free market is risky because in order for an economic system to flourish it needs risk. It is ruthless and dream crushing and will callously disregard your personal wants and needs. It is, as Joseph Schumpeter argued a force of creative destruction. In other words if the too big to fail banks had surrendered to the free market for destruction, younger, more profitable banks would have taken their place. By now the system would be back on its feet and going strong. Instead we have the same government supported debt based casinos now with more debt and more risky investments than ever.

The ever increasing and ever more strident critics of capitalism have been able to confuse many by failing to distinguish between real free market capitalism and crony capitalism. In crony capitalism politicians and their bureaucrats collude with business people and the corporate world to prevent competition and deliver monetary advantages to a few.

The country is literally full of examples. One of the most obvious and one that everyone is familiar with is the way government has colluded with the taxi drivers and the taxi unions across the country. The government in New York, sells medallions, or licenses to operate taxis to their chosen few. The medallions are very expensive usually hundreds of thousands for each one. In return for the payment they expect the government to keep out competition. Along comes Uber and Lyft with better ideas, better service, and no more expensive. In many cities where I’ve been recently virtually everyone wants to use Uber and Lyft. But still crony capitalism does not want to permit them to operate.

The government’s collusion with business causes restrictions that raise prices for users and discourage competition and innovation. It usually requires extensive training to engage in certain business. One must purchase expensive licenses to become a hairdresser, flower arranger, or even to sell lemonade. Sometimes it’s on a much grander scale such as Fannie Mae and Freddie Mac’s competing with private banks for mortgages.

Occasionally the government, for its own purposes, takes action that controls prices in an entire industry. The public/private partnerships touted by many governments are often nothing but crony capitalism. The word crony just means that government decides which business succeeds and which fails.

Capitalism works for anyone

If you examine what the term capitalism means in its purest sense you will see it quite clearly in the stock market, i.e. private ownership of the means of production. Equity ownership of shares in the largest and most profitable companies in America is available to people of modest means with just a phone call. The system is also very fair from the wealthiest to the smallest investor you pay the same. If you want a share of Microsoft, you will pay no more than Bill Gates and if you sell a share you get the same as he gets when he sells a share.

The Federal Government can’t resist the temptation to intervene and control even the stock market, however. So its plunge protection team actually buys equities when it thinks the market is falling to hold up prices. So the government becomes an actual owner of companies if for only a brief time and always on the sly.

When all you learn is to hate it…

Anti-capitalist attitudes are all that most young people have ever learned. They can’t do interest equations or other economics in high school. Then Marxist professors tell them capitalism is an unfortunate system based on greed and exploitation. They don’t develop the skills necessary to use logic and critical thinking. As a result many struggle to find jobs. What they do find is tens or even hundreds of thousands of dollars in student loans. These keep them from being part of the productive nation for many years.

Capitalism doesn’t cause these things. In fact it lifts people from poverty. It creates opportunities for people to have anything they want if they can provide other people with enough of what they want. In other words, produce something that others want to buy.

Reprint from The Castle Report, copyright 2017 Darrell Castle, by permission.

Merit of the meritocracy