If there are any American patriots out there still finding yourselves enmeshed in continuing wonderment about how foolish, ridiculous and downright idiotic left-wing politicians and legislators are, about many things, but in particular gun control, a reality check is long past due. This gun control thing that most of us know is useless and totally ineffective at performing its stated goal, is persistently on the leftist agenda. Many people are under the misconception that liberals really do believe that more gun control equals more public safety.

It matters not how much data they are shown that show more legally owned firearms decreases crime rates and places like Chicago, where gun control laws couldn’t be stricter, shootings, murder and mayhem are a daily reality. This may not make sense to you, but to the left, there is no need for such comparisons. There is of course, a reason for that.

While it is quite true that the academic left and the over schooled progressives possess a ton of education. What amazes conservatives is how those people can manage to never acquire even an ounce of common sense. But when it comes to gun control, they know exactly what they are doing. As the header in this article indicates, gun control controls no guns, controls or inhibits no violence and prevents not one single criminal, outlaw or gang member from obtaining and using firearms.

Gun control therefore controls what? Answer: It controls 99% of the population. That being the law abiding people who will, whether they agree with the laws or not, comply with them. Obeying those laws exposes individuals and their families to the threat presented by “uncontrollable guns” which have and always will find their way into the hands of criminals and terrorists. 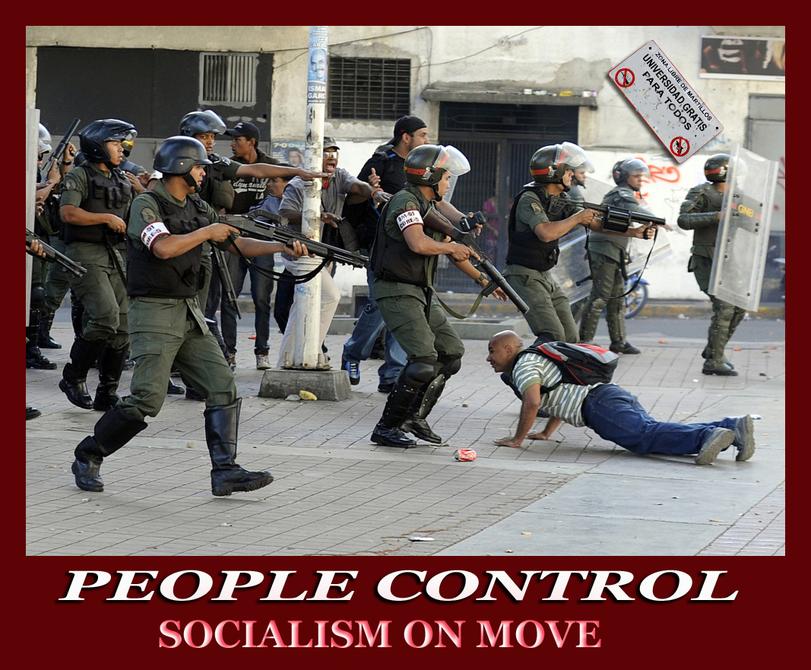 A riot control scene from Venezuela. Gun control leads to scenes like these.

Referring now back to that liberal deception referenced above, one might ask, if they do know the dismal results of their gun control campaign, what then could the actual motive be? The history of Communism and its dominate or eradicate doctrine has given us the answer. We see it in action right at this moment as the socialist government in Venezuela is in the process of murdering its defenseless and unarmed citizens. Citizens, one will recall, not too many months ago, who let their government confiscate and destroy their firearms. For their own safety. Sound a bit familiar?

So, does the leftist politician in this country really fear an armed uprising from the people? Probably not, at least it’s not what they would admit to out loud. But deep down in their gut, there simmers that possibility. Alas, disarming the population is simply great preventive medicine. And besides, dominating the masses is in their DNA. It’s what they do.

Bad people would choose other weapons

Considering once again their lack of common sense which also embeds itself in their DNA, could anyone believe for a second that if firearms did not exist and no one ever invented them that bad people of this world would not find ways to kill themselves and innocent civilians as well? Is it possible that the left believes that? Not a chance.

A simple analogy would be to ask a couple of very straight forward questions. If one needed to drive a nail into a structure, would he use a hammer to do it? Or if there were no hammers and he wanted to drive that nail, would he use a pipe, a stone or even his boot to do the job? He would do the job, maybe not as quickly, but do the job he would.

Considering that any weapon is a weapon, why do leftist regimes need to ban firearms when an uprising populace might carry pitch forks or dare we say, hammers? Here is what they know and we should. While an individual would be at great peril from a holdup man or some other thug wielding a hammer, a government will never be in such danger.

Stalin taught broom stick and pitchfork wielding Ukrainians that ultimate and murderous lesson as he slaughtered, or starved to death, 21 million of them. Those poor unfortunate souls had handed over their firearms to a Communist regime that annihilated them. Unfortunately, the people in Venezuela are getting a brutal education in that reality at this very time.

In America, the people, thanks to our Second Amendment, still hold the power to control. The leftist are working every day to invert that. We must never let them.

Transgender in the military – another humanitarian hoax